originally posted by: swanne
Yes, just like Al Gore predicted we would all be cooked to death by now.

It's fun to make sensationalist speculations of things one century in te future, unfortunately sometimes Mother Nature doesn't get the memo.

I really don't give a crap about what a politician says, but it seems to me like you're talking about this which I commented on the very next page.

Don't believe everything you hear from Rush Limbaugh.

I use facts, like a Norwegian named Roald Amundson successfully sailed through the northwest passage because there was so little ice in the arctic in 1905.

Tell us more about how navigating the Northwest passage negates the loss of Arctic Ice.

BTW here is what the Northwest passage is. 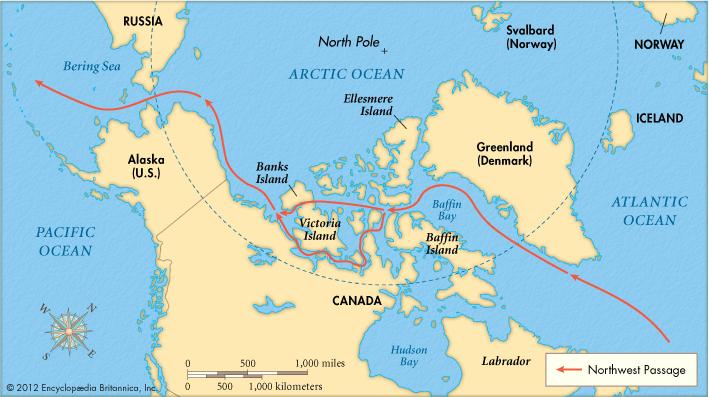 Because until modern times it was a fantasy because it couldn't be done.

Today it is no biggie, we have steel hulls and ice breakers.

Back then it was wooden sail boats.

Meaning the ice had to be very sparse for a boat to make this trip.

Right.
And the prevailing theory is, what again? Especially considering the accepted theory of the previous ice free periods are the Milankovitch cycles... and our current position in relation to the sun doesn't meet the criteria and the greenhouse gas theory is demonstrable and repeatable...

He knows damn well Al Gore never said such a thing and that even if he did it's entirely irrelevant, it's just shoring up with some circle-jerk material.
edit on 3/20/2015 by Kali74 because: (no reason given)

originally posted by: johnwick
a reply to: Kali74
Come on just stop.

It is not historical in any way, unless you mean the 35 years satellites have been taking pics.


There is more truth contained in the implications of this comment than the whole of the OP.

Funny how that argument CO2 lags temperature has been shown false over and over again, yet you make sure you get that little bit of malarkey on the first page of this thread.

CO2 and CH4 both cause radiative forcing. As a result of human activity both CO2 levels and CH4 levels have spiked and continue to rise. The cause and effect of the excess 'greenhouse gases' is apparent.

But go ahead and use pseudoscience to support what you believe. The evidence is there, yet many choose to ignore it, and it almost seems like some try to suppress this overwhelming consensus of the experts who actually study this which is different from the armchair experts who do not even know what a residence time calculation is.

You always act like you are so sure of AGW

Well yeah, I consider myself, not an idiot.

originally posted by: Greven
but it seems to me like you're talking about this


I am not talking about that thread. I am talking about Gore's apocalyptic movie, in which he climbs on a lift and tells the mesmerised audience that in a few years from now (keep in mind he made that movie one decade ago) the Earth would become inhospitable.


originally posted by: swanne
Yes, just like Al Gore predicted we would all be cooked to death by now.

It's fun to make sensationalist speculations of things one century in te future, unfortunately sometimes Mother Nature doesn't get the memo.

I really don't give a crap about what a politician says, but it seems to me like you're talking about this which I commented on the very next page.

Don't believe everything you hear from Rush Limbaugh.


OK this is the reason I just get bored and leave.

I have already been called irrational and illogical.

Now we have another insinuating if people disagree they listen to rush.

Next it will be the old "fox news" bit.

Than it will be stupid republicans just want to destroy the earth.

You know it is possible to not listen to rush or watch fox or be a republican care about the environment and still disagree.

I don't follow any retarded political parties, I watch no msm at all and I get tired of partisan be on talk radio.

I do care about the environment.

That is no reason to rape logic just to pass a green agenda though.

I am just a truth seeker.

There are many probs with AGW, anyone without the intellectual honesty to admit this...

This will likely be my last post of this thread.

originally posted by: SlapMonkey
Well, in the case of CO2, anyhow, it's because the rise in CO2 tends to lag behind temperature rises, not precede them. 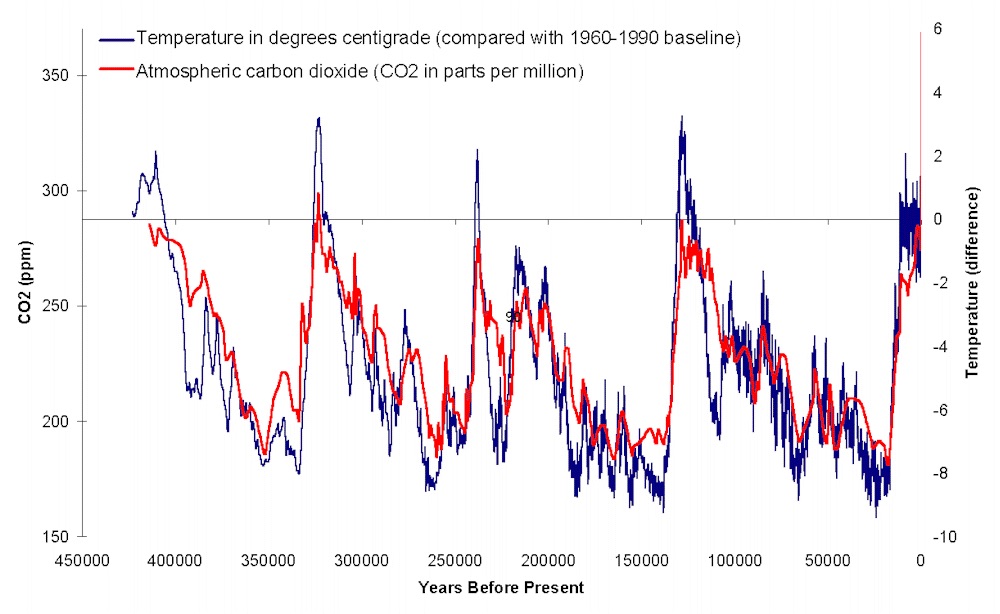 Oh good, this talking point again. Sticking to the script, I see.

And the prevailing theory is, what again?

The one that received the most funds from tax-hungry political powers.

You are a gov and you want people to accept more taxes? Tell them that the tax is "scientifically" justified and make sure you have paid scientists to back your story.

I was going to take the road of not discussing this issue with you again.

Still am, although all of your comments to other people about their logical fallicies and bad information, while you post your own versions, really does lend itself to some aggravating amusement.

Best regards...you're seriously not worth the effort this time 'round.

originally posted by: swanne
I am not talking about that thread. I am talking about Gore's apocalyptic movie, in which he climbs on a lift and tells the mesmerised audience that in a few years from now (keep in mind he made that movie one decade ago) the Earth would become inhospitable.


Quite frankly, I've never seen his movie, so you're going to have to quote him on it. Maybe a link or something?

originally posted by: johnwick
OK this is the reason I just get bored and leave.

I have already been called irrational and illogical.

Now we have another insinuating if people disagree they listen to rush.

Next it will be the old "fox news" bit.

I don't think you understand... and you would if you had read the link... Rush Limbaugh was the one who took second-hand hearsay and claimed that Al Gore had definitively said that the Earth would cook in 10 years.

There is kind of a reason I used that particular name.

originally posted by: Kali74
a reply to: johnwick

Yeah but how does that prove there was no ice?


I didn't say no ice, you assumed that.

I said so little.

As in so little that a wooden ship could sail through it.

No steel hull, no giant diesel engine no icebreaker.

It had not been dine before because there was always too much ice every time someone tried it.

I point this out in counterpoint to your "historic" claim.

As this precedent has easily shown, it is in no way historic.

It is only historic in the cobtex of a 37 year time scale.

As I understand it, he did NOT go from Norway to Alaska - but stopped at Nunavit. And the journey took 3 years.

His journey took three years to complete - he and his crew had to wait while the frozen sea around them thawed enough to allow for navigation.

His little 47 ton fishing boat, Gjøa (pronounced "y-eu-a") was finally able to leave his Arctic base at Gjøahaven (today - Gjoa Haven, Nunavut), and on August 26, 1905 he and his 6-man crew encountered a ship bearing down on them from the west. They were through the Northwest Passage!

Untrue for one thing, even if it was true that makes it incorrect how? I mean science isn't correct or incorrect based on taxation or monetary value.

originally posted by: jrod
a reply to: johnwick

The proofs in climate change lie within concepts like radiative forcing, increasing CO2 and CH4 concentrations in the atmosphere. Also the Ice is melting, we have less ice now than we ever have in modern times. How can you just simply ignore this reality?

The models you speak about are not relevant to this discussion. You find a handful of outliers, cherry-pick those data points then go on to claim that the models are all wrong. This would be no different in looking at the outliers of the National Hurricane Center's 'spaghetti' models, then claiming all the models are bad because they storm did not do what the outliers predicted, meanwhile completely ignoring the consensus of the rest of the models that generally do a pretty good job in predicting where the storm is going.

I am not even going to address the logic fallacies in your arguments. Where are these facts that you write about? Do you really expect an intelligent person reading your posts will believe what you write is factual because you wrote the word fact over and over again?

Name one significant thing they got right.

I have been hearing this stuff for the better part of 30 years.

We were supposed to see dramatic sea rise, higher temps etc by now....but there has not been any thing really either way.

In fact temps have remained relatively flat, and the sea has risen next to nothing.

BTW those were supossed to be by 2012 I believe it was.

If they can't get anything right, or even close, close works for me, than their theory is flawed.

Thatvmeabs as per the scientific method, they scrap it and start over, not just keep adjusting it.

It is a pretty straight forward easy concept.

They know what they are talking about or they don't.

Since they have been wrong my entire life, I am through the use of reason, forced to believe they aren't really sure.

Which means, they don't know.

I don`t get that Washington Post article at all ?

Sea ice coverage in the Antarctic continues to increase, according to data released on Thursday by the US National Oceanic and Atmospheric Administration (NOAA).