Fear and Loathing in Ukraine. Truth and unanswered questions. What is happening there?

posted on Mar, 20 2015 @ 11:40 AM
link
Im not anti-American. It is hard to be anti-American when most of your favorite movies, music, books and even clothes are from USA.
Am I pro-Russian? Not really. I just cant see the devil in Vladimir Putin. And i see western propaganda...
Im only asking questions and seeking truth. Im anti-war and anti-warmongering.
I belive that peoples should coegsist in peace. And they should not pay with their lives for politicians schemes...

So, lets take a look at the FACTS:

Presidend Obama admitted that USA took part in overthrowing legal government in Ukraine.
This is not pro-Russian propaganda. Thats the interview in which he said that:
"Transition of power"
There is more of course:
Nuland leaked call
And here is Oleg Tsarov speech:
Oleg Tsarov

Even more interesting when you know this facts:

Who is Poroshenko?
Hes from jewish family. You will understand later why im writing this... This is not anti-semitism. Hes father name was Valtsman. He was fraud and well known thief in the 80's. He changed his name to his wife name, Poroshenko. Its not a crime to change name but it tells something... And Petro Poroshenko, his son, is Ukrainian oligarch. Rich and powerful. And not as crystal clear as he tries to look...

What actually happened on Maidan? Who was shooting?
German TV BBC

This question is interesting even more when you compare this situation to Odessa Massacre. This is (more or less) official version Odessa clashes Mysterious fire etc. Nobody knows anything...
But almost everything was recorded... And it looks completly different: What really happened in Odessa?
Innocent civilians were literally murdered, burned alive, shot or beaten to death... Children and pregnant woman included.

Murdering innocent civilians is nothing new for Ukrainian neo-nazis and nationalists that are in charge in Kiev right now. In fact they worship as heroes those peoples: SS Galizien This are pictures from funeral of Mychailo Bendyna, veteran from that division. 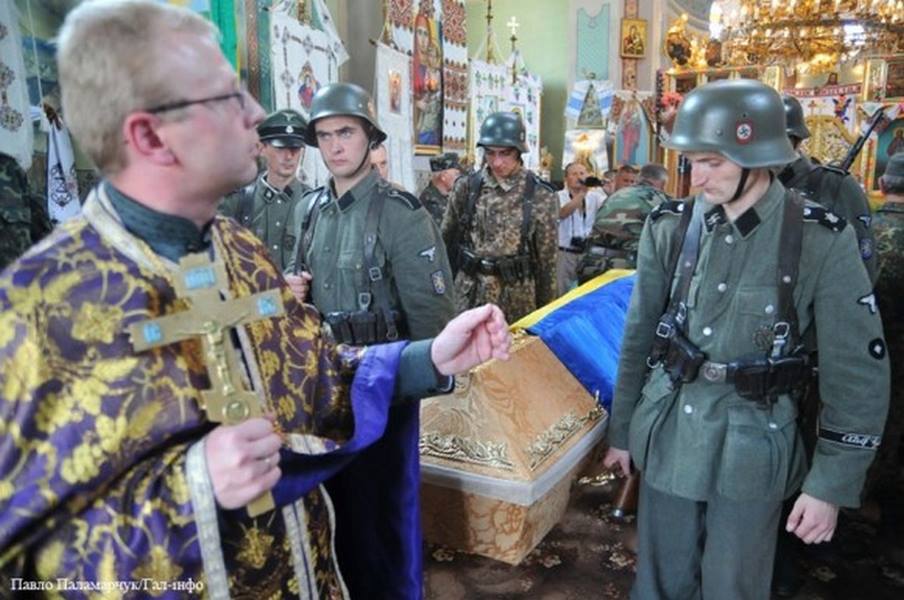 And vid: Funeral of war criminal in Ukraine They also make heroes from other bandits and butchers. Stepan Bandera After wave of protest from around the world they annuled award for him. But not for others... They are still using their symbolism etc.
Actually they honored (in parliment, minute of silence) as hero a Butcher from Warsaw Petro Dyachenko Guy that killed many Poles during Warsaw Uprising. And he was killing them like animal... They are worshipping peoples from UPA and OUN. They did this: Volhynian Slaughter They are heroes now in Ukraine. Openly. Without hiding...

Lets take a closer look on battalions "Aidar" and "Azov". They are funded by this guy: Ihor Kolomoyskyi and they are openly and without any doubt nazi: 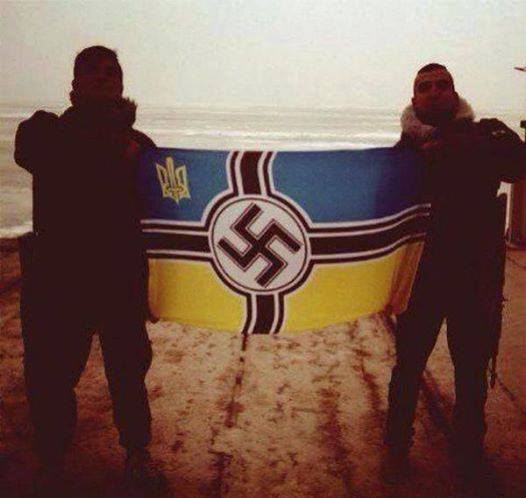 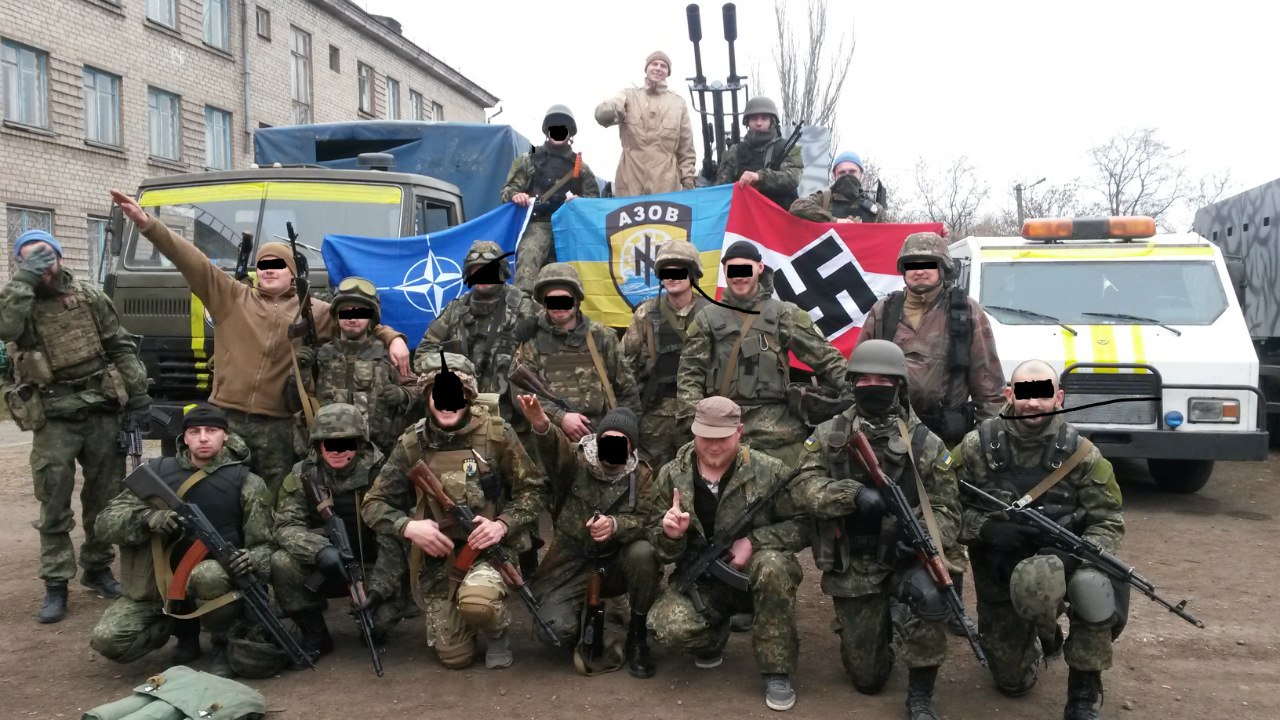 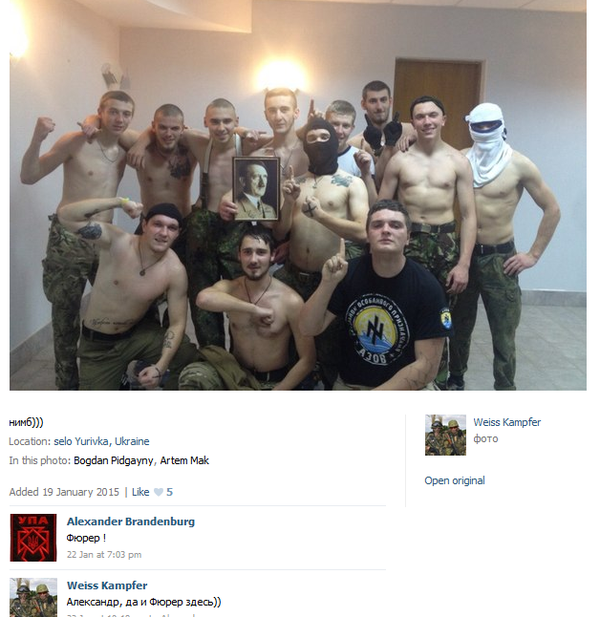 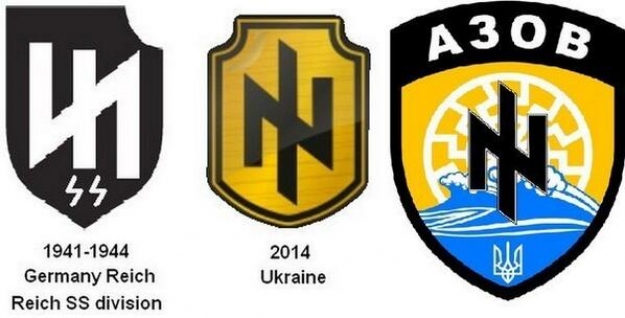 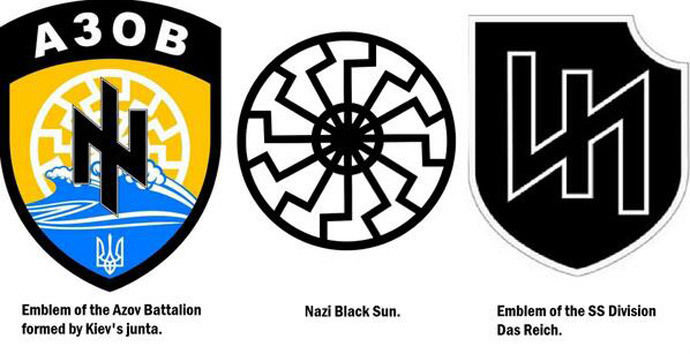 What is happening? Jews are funding neo-nazis that are killing innocent civilians and USA is actually helping them?
This is insane.
And those "Russian terrorists" that invaded Ukraine... Where are they?
Here maybe? I see only peoples from eastern Ukraine, defending themselves. You can find much more info about them, you just need to open your eyes. And this is not Russian propaganda... This is truth. Cauldron Debaltsevo And they are fighting for their homes and lives. They are defending actually. And they started doing that after Kiev forces started killing them, because they wanted autonomy. In democratic way!
So, what is happening?

posted on Mar, 20 2015 @ 11:48 AM
link
So because Poroshenko has Jewish roots, that means the Jewish people are funding the Nazi's in Ukraine? Nevermind the simple fact that Nazi's hate Jews, so there is no single reason why any single jew would support a Nazi. I have Native American roots. Does that mean my actions are indicative of some Native American plot? You levy charges on an entire people based on the actions of a single person.

A good and brave thread. F&S. The truth is always the prize.
Maybe the truth is too simple for the likes of this place-- and
too difficult to discern most times from opinion becoming
unwarranted conviction.

I think the truth of these past few years everywhere is too simple
and ugly to deny... maybe mine [is] the money changers need to
distract all of us sufficiently from their crimes with war. With the
awakening as widespread, it may have to be the big one this time.

The most dangerously addictive drug to a mere man is power.


What??
What are you talking about?
Im not saying anything about "entire people"...
Im asking why jews in Ukraine are funding nazis... Jews like Ihor Kolomoyskyi.

originally posted by: ScientificRailgun
so there is no single reason why any single jew would support a Nazi.

George Soros. Ukraine is one of his projects.

Anytime I hear someone mention George Soros I have to laugh, mainly because people honestly believe he's some Emperor Palpatine wannabe who secretly is behind everything bad that happens in the world.

What happened with you being neutral? Honestly, I'm really starting to believe that you are like the "others"...

Anyway, back on the topic.

Very well written, OP! I would like to hear an explanation from the famous crew as to what happened to we didn't participated in creating the civil war that eventually lead to this war? Or, even our own president is actually a "putinista" and is pushing Russian propaganda? I mean, to me even a year ago, it was very clear who was behind the civil war in Ukraine as i was telling people here. As the time passed by, more and more evidences started coming out and we now see the truth. I'm more than interested to see how will the famous crew try to re-frame this and how's Russia actually behind all of this.

And we still don't have ONE evidence that shows the presence of Russian military army fighting with the rebels in Ukraine. After all this time...I was saying before what I'm saying now. These rebels are just ordinary people + volunteers from Russia fighting for their lives and homes and independency!

Anytime I hear someone mention George Soros I have to laugh, mainly because people honestly believe he's some Emperor Palpatine wannabe who secretly is behind everything bad that happens in the world.

Really? uh, okay. You might want to pull some curtains back a little more. Anyway, that isn't what this thread is about, but you asked for one Jew that would support a Nazi, and since we are talking about the Ukraine, George Soros immediately came to mind.

I look at both sides, but I would not call myself neutral. I lean decidedly west. Does the U.S. have a vested interest in Ukraine? Absolutely. Are they meddling? You bet. Is it "THE JEWS"? No.

originally posted by: ScientificRailgun
a reply to: Nikola014

LOL
Ihor Kolomoyskyi
He looks quite jewish to me. He is in fact "president of the United Jewish Community of Ukraine."
Are you blind?
Stop writing and look at links and pictures in first post...

You have got a valid perspective. as derfreebie says

Ihor funded MANY battalions. And yes, Avov is among those he funded. He is a Jew, this is well known. But again, this doesn't prove that "The Jews" are fomenting the crisis in Ukraine. It's one guy funding what he believes is the defense of Ukraine. It's not a Jewish plot.

You dont know what you are talking about, dont you?
You dont know anything about Amnesty International investigation. About war crimes in Ukraine.
About those "many battalions" that you mentioned, Aidar and Azov and others...
Why you post here? Try, at least try to read first post...

I know you're parroting the Kremlin propaganda and throwing a healthy dose of antisemitism into it. I know you only joined this month and suddenly you're expert on what I do and do not know. I know what Ihov Funded. I know Poroshenko's roots and past. I know that some battalions are ultra-nationalists. I know that the U.S. has a hand in what the Ukraine is doing. I know that the UN is railroading Russia with sanctions.

Don't ever, ever pretend to know what I do or do not know. Attack the post, not the poster.

I started my thread first. See you there:

posted on Mar, 20 2015 @ 02:56 PM
link
So how many more threads do we need trying to make assertions that have been discussed many times before in many threads?

Sorry, but it just gets tiresome.

posted on Mar, 20 2015 @ 03:08 PM
link
Apart for the ongoing competition of resources, I am not sure of any war that makes sense. As for the jew nazi, culture is a dynamic thing that does change over time. The way DNA works does allow for a lot of cross breading and mixing of attributes.

I know you're parroting the Kremlin propaganda and throwing a healthy dose of antisemitism into it. I know you only joined this month and suddenly you're expert on what I do and do not know. I know what Ihov Funded. I know Poroshenko's roots and past. I know that some battalions are ultra-nationalists. I know that the U.S. has a hand in what the Ukraine is doing. I know that the UN is railroading Russia with sanctions.

Don't ever, ever pretend to know what I do or do not know. Attack the post, not the poster.

Hahahah...
Can you show me where im anti-semitic? Please, show me...
Ihor Kolomoyski not Ihov.
Im not attacking you. Im replying to your somewhat surreal posts...
And only one person here that is pretending something is you.
Tell me exactly where im "parroting the Kremlin propaganda"?

Your (relatively short) posting history is enough evidence that you harbor some agenda against the Jews. One need only click your name to see the plethora of evidence. Your entire premise is built around regurgitating what the Kremlin media outlets report, and sprinkling your Jewish agenda among it to spice things up. Everyone already knows there are ultra-nationalists fighting for Kiev. Your supposition that's it the product of some Jewish agenda is laughable and flimsy.

Regarding my spelling, I apologize. Flying fingers and the fact that English is slowly becoming a secondary language to me can lead to typing mistakes.

My posts aren't surreal. They're rebuttals against your arguments. What you suggest (Jews funding Nazis) is the surreal part.

originally posted by: voiceofthecielago
Im not anti-American. It is hard to be anti-American when most of your favorite movies, music, books and even clothes are from USA.
Am I pro-Russian? Not really. I just cant see the devil in Vladimir Putin. And i see western propaganda...
Im only asking questions and seeking truth. Im anti-war and anti-warmongering.

That is the biggest load of BS I've seen posted in quite a long time!

I TOO am not Pro-American or Pro-Russian! *snicker snicker*

Your anti-semetic thread deserves to be put in the Joke bin, cause that's what it is. Sadly lots of people believe it as hate crimes against Jews continue even to this day. As the stars your post blaming Jews got even at ATS demonstrate.
edit on 20-3-2015 by noeltrotsky because: (no reason given)