The Russians just released a nice promo video and stills of the design concept. The over all design looks interesting and has some neat features and It closely resembles the lifting bodies of LM and Boeing decent. It's interesting to see an aircraft that large proposing to use just one jet engine and two electrically driven ducted fans.
Can Russia actually build this thing? Well this is a crazy world we live in and anything is possible but I don't think I would put my money on that they will just yet.


According to a new design specification from the Military-Industrial Commission in Moscow, a transport aircraft, dubbed PAK TA, will fly at supersonic speeds (up to 2,000 km/h) and will boast an impressively high payload of up to 200 tons. It will also have a range of at least 7,000 kilometers.

The PAK TA program envisages 80 new cargo aircraft to be built by 2024. This means in a decade Russia’s Central Command will be able to place a battle-ready armored army anywhere, Expert Online reports, citing a source in the military who attended the closed meeting. 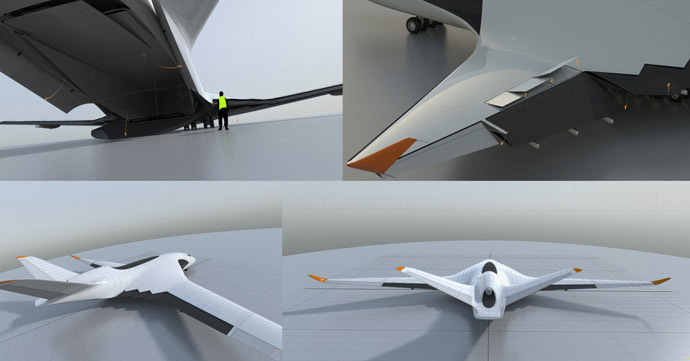 Will it ever transition from the fantasy of a video into a "thing" that flies is doubtful. Not wishing to be negative, but let me count the ways...

1. Funding - this will be expensive.
2. New advances in a range of technologies - this is highly presumptive and expensive. Does Russia have the expertise to do this?
3. etc

Right, not to mention they want 80 of these operational in 9 years. That would be seriously optimistic for a "from scratch" program even for the Chinese.

I guess they are trying to counter documented reports of our so-called "black triangles." This monster, however, is still the same, old-fashioned, "aircraft" style of vehicle that has been around for a hundred of years. Our triangles give every indication to have a totally different type of power and lifting concept copied from you know what. If this is the best concepts they can come up with as a counter measure, then the game is already over Russkies.

As much as Russian engines have improved, they haven't improved that much. Between engine reliability and cost I don't think this will go anywhere.
edit on 3/20/2015 by Zaphod58 because: (no reason given)

posted on Mar, 20 2015 @ 10:52 AM
link
I was reading that this massive transport would need extra long runways that are re-enforced...thus excluding it from most airports around the world. It would also need so much fuel many other airports couldn't service it as well.

To be honest it looks like a pipe dream. One engine? Well it better not be a Russian engine then...

posted on Mar, 20 2015 @ 10:55 AM
link
My question is won't it run into issues as to where it can land with a wingspan that large? Other than that it looks pretty. Would be cool if they could pull it off. But I don't have my hopes up.

posted on Mar, 20 2015 @ 11:41 AM
link
I highly doubt that the artist (Alexey Komarov) that designed this, for the Volga-Dnepr international design competition (Advanced Transport Aircraft of the 21st Century), was overly concerned about the technicalities of the project.

It was designed for a competition held by a freight company.

It did get him a job with Volga-Dnepr though...so, I think it did what the artist wanted it too.

posted on Mar, 20 2015 @ 12:21 PM
link
I think they issued the press release on this design a couple of weeks too early—it should have come out on April Fool’s day.

Seriously, every observable feature on this design screams “transonic”, not “supersonic”. By “observable feature” I am referring to 1) the wing sweep angle, 2) the Whitcomb winglet angle, 3) the big, fat blended wing/body, 4) the submerged engine inlet and, 5) the supposed use of electric motor driven fans for propulsion. At best, the performance envelope of this design would be about like the A380.

This is not even remotely a supersonic design; I suspect that an error was made in translation from Russian to English

They could have been drinking again when they came up with the press release?

To play devil's advocate, replace that goofy "single engined hybrid with electric fans" design concept with a trio of Trent 800's (or their Russian thrust equivalent) and suddenly this concept seems a whole lot more feasible, basically a BWB-AN124 hybrid with a trio of modern high-performance, ultra high bypass engines.

Three Trent 800's would give you >270,000 lbs dry thrust at sea level, a whopping 100,000 more lbf than a C-5's TF39's can muster. Suddenly that 200 ton figure seems quite doable, even at Sonic Cruiser-level transsonic speeds, and with fuel economy numbers that would likely leave the C-5 and the AN-124 in the dust. Throw in some basic STOL-oriented thrust vectoring on the two wing engines and you could end up with a hell of a strategic airlift aircraft that wouldn't REALLY be pushing the technological envelope that much, especially if they were to take the same "good enough" approach to construction materials/stealth features that they did with the PAK-FA. The 8-year timeline seems almost doable now.

Given that they built this,

With Russian technology, and russian engines, I would suggest that they can build what they propose.

But then again, because its not an American proposal, lets just piss all over the idea of it, right?

I think the Russians are more than capable of building something along these lines, with some modifications to its design but with the state their economy is in, it would be a herculean task at very best. Heck, I don't think any Western based institution is capable of pulling something like this off right now either and our economy is in a better state than Russia's right now.

That has funny looking landing gear. I don't like it, and it looks foreign/strange to me. It must be bad!!!

Like I said, lose the fancy schmancy powerplant and replace it with 3 high-power turbofans and you could have a prototype flying in 3 years max.

And remember, in a capitalist (ish) economy, defense spending (not fighting wars, mind you, but developing new toys) is one of the few forms of Keynesian spending with multiplier of >1.

Just look at what the US did in the stagflation 70's, we got the F-14, the F-15, the F-16, the F-18, the A-10, the B-1, the Space Shuttle, the Have Blue, the KH-11, the M-1 Abrams, and all the black projects we haven't heard about. In a time when the dollar was taking its biggest nosedive in history, the auto industry was circling the toilet, and the commercial airliner market was barely doing any better, all that defense spending more or less kept the lights on for American heavy industry.

If I were the Russians right now, with their economy, I could think of many worse things I could be doing other than printing more money (sorry, DEFICIT SPENDING) to pay for Pak-FA's, the PAK-DA, that fancy new tank, and this beast. It makes more economic sense than you might think it would.

posted on Mar, 22 2015 @ 08:43 PM
link
The Soviets are great at looking outside the box in regard to aerodynamic pacages.One has just to look at the path of the ground effect aircraft they bought out.Give it Rolls Royce engines and it might be doable.Ducted electric fans need solar power but didn,t think even that could hold the charge unless they look at the newer storage batteries.

I don't think there's any way to do what they say it will, but give it more conventional propulsion and I can see it flying.

originally posted by: Zaphod58
a reply to: neformore


At first i think that its was a single engine too, but later looking the video and other images of the aricraft its clear that it design have 3 engines.
edit on 22-3-2015 by drwire because: (no reason given)