Not your usual anti GMO thread.. But the reason why Glyphosate kills EVERYTHING!

posted on Mar, 19 2015 @ 09:40 AM
link
Glyphosate binds to metal. It kills by interfering with proteins and enzymes on the molecular level that need metal to survive. This video is not ancient history but includes some of the latest findings.... Which makes sense to me.. It certainly explains much of the increase in many of the ailments that seem to be increasing ... Especially when you consider we as a species have close to 5 pounds of bacteria in our bodies which without we can not survive.

Herbicides cause stronger weeds that require progressively more herbicide. GMO crops are needed to survive the progressively toxic means for weed control. Where does this trend lead us?

Then pharma enters the picture to treat your symptoms with pills with more side effects to be treated with more pills. Where does this trend lead us?

The profit machines own the technocrat class, so you will be told everything is safe and effective. Just like so many times in the past. Remember?

Profit machines are preying on humans. Wake up and realize it. They are amoral, efficient, and they will never stop.

edit on 19-3-2015 by InverseLookingGlass because: (no reason given)

posted on Mar, 19 2015 @ 11:01 AM
link
Maybe this is why god will destroy the earth. To rid humanity of this vermin that keeps destroying it. A self protection mode maybe?

Its like I have said, even if GMO's are safe the herbicides that they work with are not

those are the same herbicedies used in countless non gmo applications

posted on Mar, 20 2015 @ 07:11 AM
link
That was a very good and clear description of Glyphosates history and killing technique. I had searched a little on it in the past, but it was all wrapped up in complexity and not very clear to understand.

At times it does look like some alien agenda to alter the biodiversity of the planet. To continue down this road just looks like dumbness, sickness and death as metals do make up so much of our environment. Can Glyphosate take the iron out of red blood cells if it is in our blood stream?

In principle I do not have an issue with GMO, genetics is part of our environment and well done to those that can master it. The implications and influence of genetics is huge and so much more than just one molecule.

It is good to see the awareness and eduction continuing.

Yes, however with the herbicide tolerant crops have increased the amount of herbicides used and as well its now used much less discriminately
www.reuters.com...

Man will destroy it first.

posted on Mar, 20 2015 @ 10:55 AM
link
a reply to: 727Sky
I noticed at the beginning of his presentation something about organic growers of Canada? So maybe they are biased to want to scare us away from GMO.

On the other hand, Monsanto is profit driven and they would probably be biased to minimize the risks their product poses.

So how do us unbiased people who just want to know the truth sort out the bias and get at the truth?

There is definitely a hazard associated with the glyphosate in roundup in the doses that farm workers get exposed to, as noted in this paper:

I haven't seen any reliable study yet showing that consuming lots of roundup-laden GMO crops causes B cell lymphoma, but there are a couple of factors to consider about this.

One is the recent increase in usage of glyphosate and GMO crops, as seen in this slide from the video, which is a pretty dramatic increase: 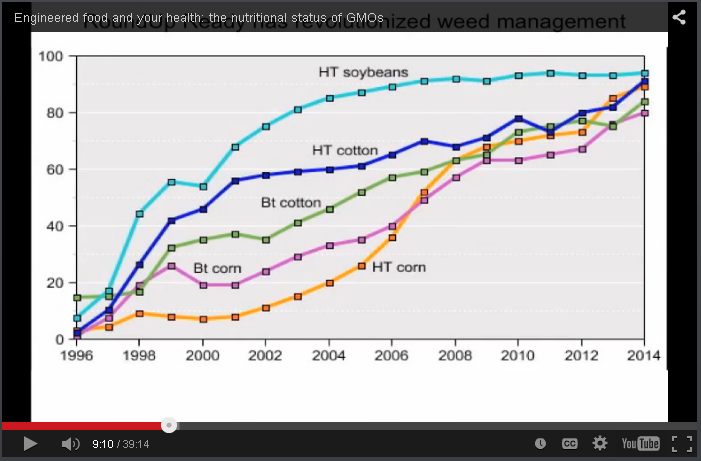 Corn with lots of roundup didn't pass the 50 percent level that many years ago, so if bad side effects from GMO corn take 10 years of exposure or more, we wouldn't have seen it yet.

The second point is whether or not his claim about bioaccumulation of glyphosate is true. He points out that Monsanto's website says it doesn't bioaccumulate. I'm not sure where the truth lies but my guess would be that the truth is somewhere in the middle, that it's not all flushed out immediately, and that the amount of time it can linger varies.

If his claim about bioaccumulation is really true, that would be the biggest concern I have but frankly a lot of his evidence is shaky and he even admits that in some cases, such as when he's showing a study that's been retracted. He says it was retracted because the proper procedures weren't followed to support the claims (sample sizes were too small), so it seems like they should just re-do the study with the proper sample size and see what that shows. Therefore I can't say shenanigans like this inspire a lot of confidence in what he says.

On the other hand we know glyphosate exposure can cause B cell lymphoma so I'm not trying to dismiss everything he says about the dangers of glyphosate. Until I do more research on the subject my initial impression is that he's inflating the risks with some rather dubious claims which in some cases don't seem to be well supported.

These are short time fixes that add like drugs in ecological systems. Once applied the land become dependant on them..

posted on Mar, 20 2015 @ 11:20 AM
link
Few things make me feel trapped on this mad planet like this topic. How the hell do we stop this vicious, insane cycle of death?

Now that spring is here I will see my neighbors spraying their yards incessantly...and if I say anything to them - I'm the crazy one.

posted on Mar, 20 2015 @ 11:22 AM
link
Ahhh, I knew you guys were just waiting for me to show up, lol. Here's my recent research on yet another great anti glyphosate thread.

More and more independent studies are coming out about the dangers of Roundup/glyphosate. Infertility is high among farm workers who spray these toxic chemicals. Even published here on the government info site www.ncbi.nlm.nih.gov...(see below) Monsanto claims it's safe. Don't hold your breath waiting for Monsanto to come out with data on the outrageous effects of this "safe" herbicide/pesticide/dessecant on our foods, in our soil and water.

Don't listen to us extremists, keep sitting in front of the boob tube listening to Roundap ads singing in macho western tunes eerily similar to the theme song of "Rawhide" and be 'the man' while you desecrate your biological functions, chemically castrating yourselves.


Ever wonder why the male impotence rates seem to have sky rocketed in the last few decades? Monsanto probably owns stock in Viagra and Cialis .

Eli Lilly acquired rBGH, sold as Posilac, from biotech company Monsanto in 2008, despite the bad publicity Monsanto received for years for developing the hormone

Mitch Daniels, Director of the Office of Management and Budget, was the vice president of another company that developed the hormone (rBGH) with Monsanto, Eli Lilly.
watch.pair.com...

Monsanto sold to Eli Lilly in 2008. The above shows connection with Eli Lilly, manufacturers of Cialis. But wait......read this and follow the trail!:

In 2002, Pfizer merged with Pharmacia. The merger was again driven in part by the desire to acquire full rights to a product, this time Celebrex (celecoxib), the COX-2 selective inhibitor previously jointly marketed by Searle (acquired by Pharmacia) and Pfizer. In the ensuing years, Pfizer commenced with a massive restructuring resulting in numerous site closures and loss of jobs including: Terre Haute, IN; Holland, MI; Groton, CT; Brooklyn, NY; Sandwich, UK and Puerto Rico.

Pharmacia had been formed by a series of mergers and acquisition with its predecessors, including Searle, Upjohn and Sugen.

Searle was founded in Omaha, Nebraska, in April 1888. The founder was Gideon Daniel Searle. In 1908, the company was incorporated in Chicago. In 1941, the company established headquarters in Skokie, Illinois. It was acquired by the Monsanto Company, headquartered in St. Louis, in 1985.

In America, there has been a substantial age-independent decline in testosterone that does not appear attributable to observed changes in explanatory factors including health status and lifestyle characteristics such as smoking and obesity. The estimated declines were larger than the cross sectional declines typically associated with age, as shown in Figure 1 [3].

Testosterone, the male hormone, is the major driver of male reproductive development and function. Suppression of its levels within the adult testis shuts down spermatogenesis and induces infertility. Studies of men with idiopathic infertility – for which the cause is unknown - and low sperm counts often show evidence of abnormal Leydig cells, which produce testosterone in the testis.

In Europe, incidences of TGC and congenital reproductive tract malformations have been going up coincidentally with a downward trend in semen quality and testosterone levels (although there are only data for the latter in Denmark). These disorders share common risk factors and are risk factors for one another. Consequently, it has been proposed that the conditions collectively may represent a syndrome - a testicular dysgenesis syndrome (TDS) - caused by a common underlying causal factor, which is either a change in lifestyle or an environmental toxin, especially endocrine disrupting chemicals such as pesticides. Notably, the review published by the European Science Foundation (an official body that coordinates international research programmes in Europe) fails to mention glyphosate explicitly, even though its use has been rising most rapidly among pesticides in Europe and in the rest of the world since the 1980s to 1990s.

April 25 (Reuters) - Heavy use of the world's most popular herbicide, Roundup, could be linked to a range of health problems and diseases, including Parkinson's, infertility and cancers, according to a new study.

The peer-reviewed report, published last week in the scientific journal Entropy, said evidence indicates that residues of "glyphosate," the chief ingredient in Roundup weed killer, which is sprayed over millions of acres of crops, has been found in food.

Those residues enhance the damaging effects of other food-borne chemical residues and toxins in the environment to disrupt normal body functions and induce disease, according to the report, authored by Stephanie Seneff, a research scientist at the Massachusetts Institute of Technology, and Anthony Samsel, a retired science consultant from Arthur D. Little, Inc. Samsel is a former private environmental government contractor as well as a member of the Union of Concerned Scientists.

"Negative impact on the body is insidious and manifests slowly over time as inflammation damages cellular systems throughout the body," the study says. We "have hit upon something very important that needs to be taken seriously and further investigated," Seneff said.

Environmentalists, consumer groups and plant scientists from several countries have warned that heavy use of glyphosate is causing problems for plants, people and animals.

Thank you for your contribution to this thread !!

Glyphosate is nasty stuff,it does kill weeds but in doing that it destroys the soils as well,the problem is it kills everything in the soil including the micro-organisms whom are essential for a healthy soil....

“Contrary to the current widely-held misconception that glyphosate is relatively harmless to humans, the available evidence shows that glyphosate may rather be the most important factor in the development of multiple chronic diseases and conditions that have become prevalent in Westernized societies.” [emphasis added]