Tall Grey Photographed Standing In The Middle Of The Street

A woman from Atlanta, GA was on her way to work on Tuesday morning Feb. 3rd when she noticed a triangular object in the sky. She took a couple of pictures of the object on her cell phone only to find out later that she inadvertently captured what appears to be a tall grey alien standing in the middle of the road directly in front of her car. Initially, her focus was up in the sky but after analyzing the photos and zooming in from different angles, the would be grey was noticed in the road. Here's the report:

Not a joke.......not losing it either......got a question? For God's sake please tell me what in the world this is and where I should call to report it?
My family saw something strange in the sky Tuesday am approx. 6:45am, while in the car, and took pictures of it. We could not identify the flying object which was too close for comfort. We kept trying to blow it up from all angles on the cell phone tonight and zoomed down towards the ground on the cell and this is what shows up. The neighborhood trash was scattered in the street.
We have several pictures of the thing and when you zoom in to the head you can see the eyes. Later that day 2 army trucks were riding through the neighborhood which was strange but we did not pay much attention to it.
I called the non-emergency police number and the young lady told me to call back tomorrow to see if I could get appropriate numbers to call. What do you think? Please let me know. I emailed it to 2 news stations here and was referred to you to file a sighting.
You could see it better and blow it up from all angles on the cell phone where the pictures were actually taken from. We e-mailed the pictures to my personal email and I saved it as a PowerPoint and zoomed in on it. I had to brighten the contrast on it in PowerPoint because it was dark outside.

Here are the images: 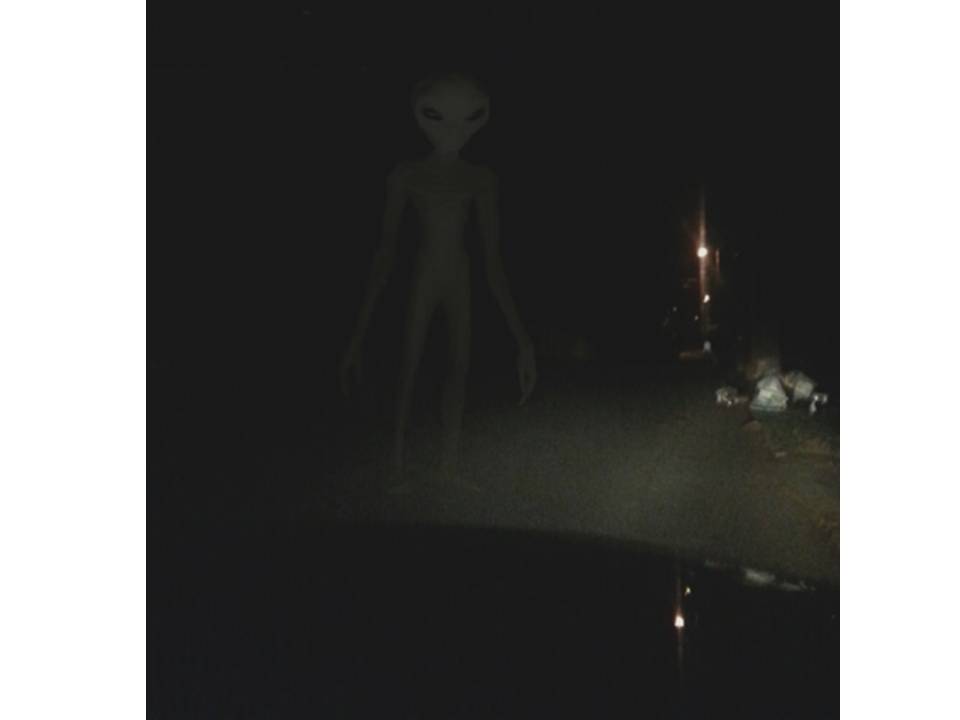 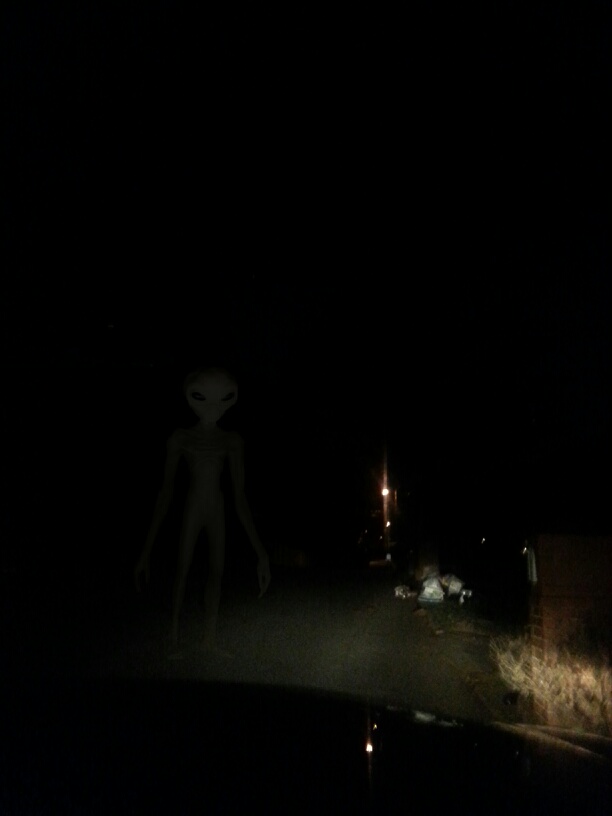 One thing that I noticed about the images was that the grey is not visible when looking at the pics from a distance but the closer I get, the image becomes clearer. It looks as if the grey has a phantom like quality and is not completely solid. The NUFORC site has made a note that even though the photos have yet to be authenticated, they proceed with a considerable degree of apprehension:

NOTE/CAUTION: We have spoken with the woman who submitted the report and photo, and she sounds to us to be both sincere, and serious-minded. She claims to have seen the creature, at the time the photo was taken. However, the photo has not be authenticated, and we post it here with a considerable degree of apprehension, not knowing whether it is an authentic photo, or whether it might be a hoax. We are aware that there are some “spam” programs, which are capable of embedding “spam” images of aliens in photos taken with some types of cell telephones. However, we post the photo, nevertheless, believing that if it is authentic, humanity deserves to be aware of the sighting incident. We have requested that sighting reports be submitted by the other witnesses, who allegedly also witnessed the creature, at the time

Well, as the NUFORC states, the woman sounds sincere but like stated above, there are programs which can duplicate these effects. Many researchers have alluded to the assumption that some of these ETs often struggle to remain in our dense 3rd dimensional environment. Could this be one of those cases where the alien is caught phasing in and out between densities or altering it's physical composition to the point of appearing ethereal and having an astral like component to it's being? Or maybe it is just the product of a deceiving software program. Anyway I thought it was interesting. What are your thoughts?

posted on Mar, 18 2015 @ 03:10 PM
link
Or it could be a 100% legitimate photo of someone's clay creation. It looks exactly like the Hollywood type Greys you see in movies

originally posted by: QueenofWeird
Ok.....very skinny indeed. I don't know. How can this thing even stand up with that tiny waist? And the pictures are the same, right?

originally posted by: QueenofWeird
Ok.....very skinny indeed. I don't know. How can this thing even stand up with that tiny waist? And the pictures are the same, right?

The NUFORC has it listed as two different photos.

All any of us can do is look at it and ponder. This field is so full of hoaxes and hoaxers that I'm not sure any of us can ever believe a photograph as evidence.

Believe none of what you hear and only half of what you see is still good advice. I would like proof but am aware that I may never get anything solid. These pics are some that look too good to be true. It will be interesting to see if anything else comes out about this. I'm also not sure I could have taken that pic if I were the one standing there thinking it was real. I likely would still be running the other way.

The reach on that thing is money...

yeah, sorta like the Manute Bol of Zeta Reticuli.

Hahahaha, BUT the big hands are a nice touch!

It looks photoshopped to me, but I'm not an expert.

I'm sure somebody will be along with more experience.

The street, lit up by the car lights, appears to me to be visible through the legs and there does not seem to be any uneven lighting of the alien image itself (except that its 'face' is lighter than the rest of its body).

I would conclude that the image of the alien has been added as an overlay to the photograph.

Why does, this looks too good to be true keep going over and over in my head while looking at these pictures? I am truly interested to see if anyone can debunk these...Because these pictures look amazing! I just don't understand how you wouldn't see it there while taking pictures, and if you did, why not take more pictures?? Or at the least still be running while screaming as we type about it?? Something smells fishy here....

posted on Mar, 18 2015 @ 03:20 PM
link
The lighting doesn't match at all and it has a ghosty look to it, as if it was pasted into the picture.
Also, where is the apparent triangle craft that was the focus and reason of the picture?

Edit: There is also no shadow at all cast by the Alien.
edit on 18-3-2015 by ShadowLink because: (no reason given)

So, this "Thing " breaths the same atmosphere as us Earthlings

posted on Mar, 18 2015 @ 03:21 PM
link
I would have gotten out and tackled that thing. maybe its time to keep some heavy duty zip ties and duct tape in the car. blindfold that sucker and interrogate him for intelligence info.

The street, lit up by the car lights, appears to me to be visible through the legs and there does not seem to be any uneven lighting of the alien image itself (except that its 'face' is lighter than the rest of its body).

I would conclude that the image of the alien has been added as an overlay to the photograph.

The lighting on the ankles of the second picture are what has me intrigued....They either did a fantastic edit job, or this is real...

But also the face on the second picture just looks wrong...Like they lit up the head to let you see it better....I don't know, I don't think I am sold on this being real just yet.....
edit on 3/18/2015 by Chrisfishenstein because: (no reason given)

With no light from the headlights hitting its legs?