page: 1
12
log in
join
share:
Gemwolf
+2 more
posted on Mar, 16 2015 @ 02:50 PM
link
So it looks like (some) scientists may be accepting the myth of the Himalayan Yeti as fact. They seem to be focusing on "what" the Yeti is, and not so much if the Yeti exist. However, it may be less exciting than the mythical Yeti we all imagine. There has been suggestions that the Yeti may be a species of polar bear thought to have gone extinct about 40,000 years ago. But now, less exciting, they say it's a brown bear common in the Himalayas.

...A year ago, geneticists reported that RNA extracted from hair samples attributed to the Himalayan Yeti monster, a.k.a. "the Abominable Snowman," were actually most similar to the 40,000-year-old genetic signature of a now-extinct breed of polar bear. They suggested there might be a yet-to-be-discovered bear species lurking in the remote Himalayan snows.

Now a different research team says the hairs were just as likely to come from a type of brown bear that's common in the Himalayas.
...
The scientists behind the original study, led by Oxford University's Bryan Sykes, are holding to their claims about the polar-bearish RNA. But Eliecer Gutierrez of the Smithsonian Institution and Ronald Pine, who's associated with the University of Kansas' Natural History Museum and Biodiversity Research Center, say there's too much genetic overlap in the RNA results to rule out the Himalayan brown bear.
Source with news report video.

A comparison between the "RNA Strings": 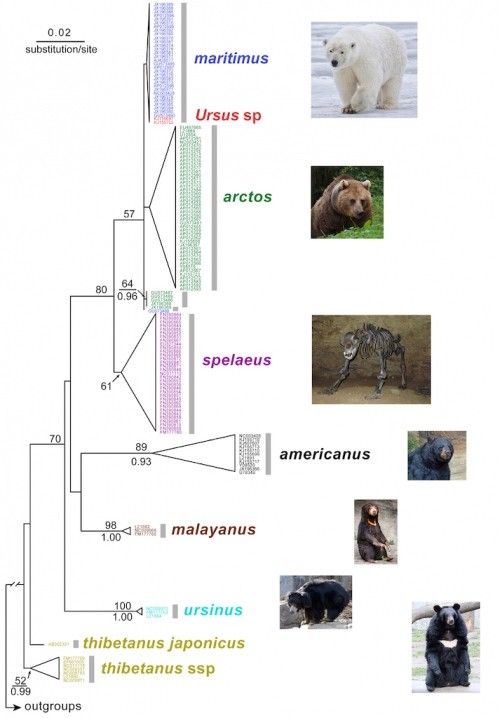 I am more likely to believe that it's a polar bear species, seeing that many Yeti reports have described the creature with white fur. And it's much more exciting than a boring old brown bear. And I doubt that the locals, that have also reported Yeti sightings, can confuse an animal that is "common" in the area with something else. Not impossible though.

The original scientists that claimed it's a Polar bear, is sticking to his guns.

...In an email to NBC News, Sykes said he stood by last year's findings. He noted that the findings published in ZooKeys were "entirely statistical" in nature.

"The explanation by Gutierrez and Pine might be right, or it might not be," Sykes wrote. "The only way forward, as I have repeatedly said, is to find a living bear that matches the 12S RNA and study fresh material from it. Which involves getting off your butt, not an activity I usually associate with desk-bound molecular taxonomists." ...

And just for fun, the original news article on the claims.

Edit: The published science article contesting the polar bear claims - PDF
edit on 16/3/2015 by Gemwolf because: (no reason given)

posted on Mar, 16 2015 @ 03:01 PM
link
My problem with this theory is that many of the reports of bigfoot/yeti/etc. reports the creature walking up on its hind legs, having hands, screaming, etc.

This doesn't match up to any bear species living or extinct.

it sounds to me like they are not trying to prove the existence at all - but just denying it in other contexts.
edit on 16-3-2015 by MentorsRiddle because: (no reason given)

Maybe the Yeti is a large bipedal werebear? 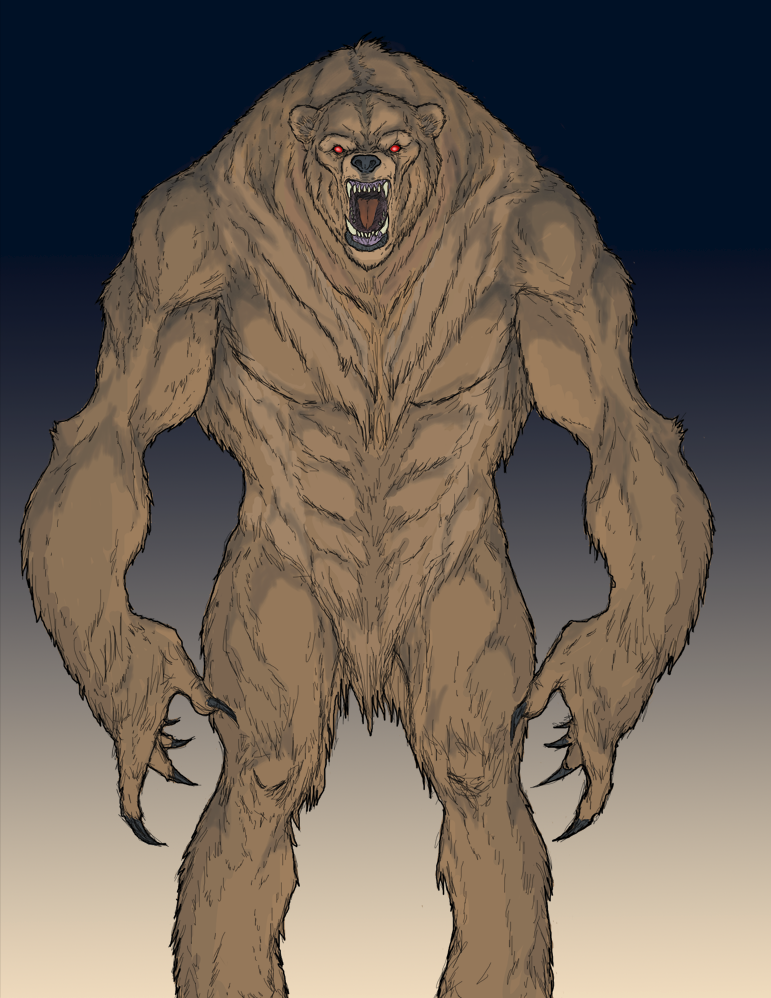 
My problem with this theory is that many of the reports of bigfoot/yeti/etc. reports the creature walking up on its hind legs, having hands, screaming, etc.

Bears can walk on their hind legs.

Some even skilfully ride motorcycle highwires. 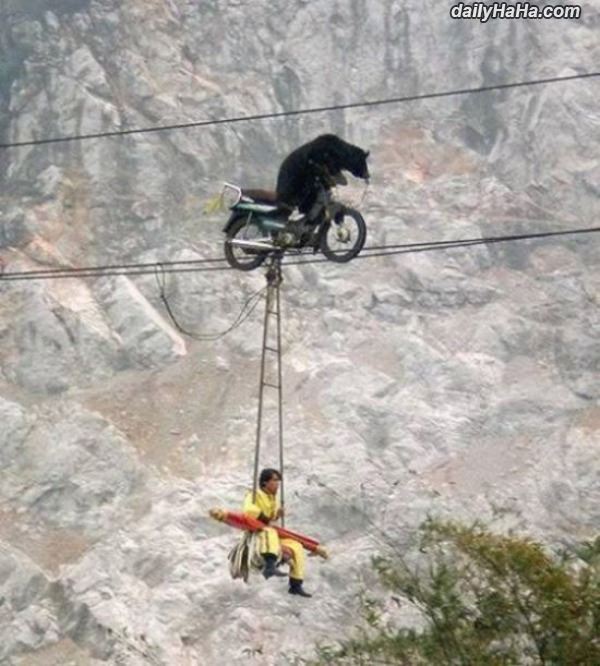 Oh you mean a Gurahl? The whole extinct polar bear angle I found to be more interesting than the old homid/ape one. Because if it actually turned out to be a believed to be extinct polar bear, it would help establish a precedent I think. In our shrinking world we humans like to think we know pretty much what the earths surface holds. Yes I realize that there are many quite large areas on the earth where people may have never set foot, I am arguing the general thinking here. A rather large relic animal like that surviving in a isolate area may not be all that uncommon. Who knows what kind of creatures may live in locales that are remote elsewhere?

This is why they raise the possibility of it being an "not yet discovered" species of bear. Chimpanzees and howler monkeys have different "howls", there's no reason to think this not yet discovered bear wouldn't have a different howl. There's no way to know, the species hasn't been discovered yet.

Not throwing out the idea of the yeti being real, just looking at the research objectively.

posted on Mar, 16 2015 @ 08:06 PM
link
A bear walking in a bipedal fashion is very plausible.
I have caught a glimpse of an upright walking critter in the woods myself.
All I saw was a torso through the foliage. I went the other direction.


Maybe the Yeti is a large bipedal werebear?

posted on Mar, 16 2015 @ 09:12 PM
link
There is of course the drastic difference between a bear's paw print and a Big Foot print. That is if you believe those prints are legit of course. I personally do. Not all, but some.

I'm convinced it's not as simple as these scientists claim.
I recall Brian Blessed (British explorer, actor and presenter) retelling a story of meeting locals in the Himalayas who told him about the migration of the Yeti. According to his experience, they are well aware of them, they keep their distance, but they see entire groups of them moving from one place to another at certain times of the year.

To these people these creatures are not unknown, they're just a part of life.

That's what seems so strange when it comes to cryptozoology, to us there are potentially millions of species that are supposedly unknown, but Humans see them all the time, they just don't know they're "unknown".

You could go out into your garden now and pick a square meter of ground and probably discover an entirely new species of beetle, or worm, or flea. You can bet someone has seen one of them before, but unless you're educated in all known variations of that species to you it's just a beetle.

I believe it's the same for a lot of remote communities out there. They live alongside all kinds of animals, plants, insects etc that we might never have discovered before, and to them there is nothing to "discover".

Either way, polar bear or Yeti, it's always great to have answers and be more knowledgeable about our world.

the only thing about that is, Yeti prints are left in the snow and often seen days later. The snow melt subsequent to the print being left doesn't leave much detail behind to study. And can greatly exaggerate the size/dimensions of the original print.

That's a fair enough critique! I was however lumping Yeti in with 'Big Foot' and "Sasquatch' as I thought they were supposedly the same creature just in different regions.

Another thing about that is that bears put their rear paw into the same print the front paw left, often elongating the print to make it appear more humanoid.

I had an experience myself when I was backpacking in Malakoff Diggins, California. I've written about it before here in other people's threads. Wish I had made a plaster print somehow. I really doubt the foot print I saw was created in that manner by a bear.*shrug* All I know is my brother and I, off the beaten path, with absolutely no person in sight for miles, found it by a river with dense forestry nearby. It was a huge human-like foot print. My brother has to special order his shoes because his feet are so large. This foot print dwarfed his. We tried to replicate the foot print with my brothers bare feet and we were unable to.

with the title:
Was 19th Century apewoman a yeti? 6ft 6in Russian serf who could outrun a horse was 'not human', according to DNA tests

Clearly there was something "odd" about her, I look forward to further information that relates to this as it comes out

originally posted by: MentorsRiddle
My problem with this theory is that many of the reports of bigfoot/yeti/etc. reports the creature walking up on its hind legs, having hands, screaming, etc.

This doesn't match up to any bear species living or extinct.

it sounds to me like they are not trying to prove the existence at all - but just denying it in other contexts.

Bears will and do walk on their hind legs

Also bears do make some very strange sounds.
edit on 9-4-2015 by defiythelie because: (no reason given)
edit on 9/4/2015 by Gemwolf because: Fixed video embed

So how does that polar bear keep so well hidden from humans...to this day. Must be some pretty smart bear.