posted on Mar, 16 2015 @ 05:57 AM
link
So a new article came out today which mentioned the disappearance of Putin but it's main focus was that "All major media organizations in Russia have been told to be ready for a major press conference in the next few days".

There wasn't any information on where he has been other than "His health is really perfect and everything is OK with him, and he’s working in accordance with his traditionally overloaded working schedule."

It's said that the Kremlin have asked the US Government or Obama to participate in a global ET disclosure. If the US refuse, the Kremlin will do so themselves. Here's the full article so you can get a better picture.

Adding to this. It was SO obvious that people would jump the gun when Obama said what he said on Jimmy Kimmel Live, but it sparked a thought in my mind. Was this Obama secretly agreeing to ET disclosure? We all know politicians love to joke around about things that are supposedly being kept secret, but the truth is usually said to induce a sort of reverse phycology effect. Did he ACTUALLY tell the truth in a way that would possibly prepare the people of the US for a global disclosure? If the Kremlin do announce an ET disclosure, there is no doubt that the world will also hear of it, so even if the US refuse to take part, do they know the people of the US will find out either way? I may just be creating something out of nothing but you have to admit, the timescale for both of these events are extremely close which is why I wanted to bring it to the attention of my wonderful ATS family.

There is also a video featuring Russian Prime Minister, Dmitry Medvedev talking about "the strangers who visited our planet". It's worth a watch if you haven't already. 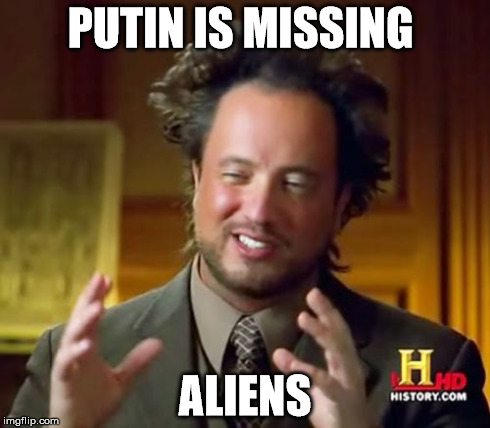 Anybody notice that it is getting increasingly hard for skeptics to hide from a growing mass of awareness over UFOs and ETs?

posted on Mar, 16 2015 @ 06:05 AM
link
Putin is alive and holding a press conference right now. He lives. A happy man is he. update: apparently he came in, showed himself, and walked out. Interesting. Skeptic's thread on this seems to be the main thread, going back to see what's going on in it now.
edit on 16-3-2015 by Aleister because: (no reason given)

Have aliens abducted him?

Is Putin an alien?

You be the judge…

originally posted by: jonwhite866
a reply to: Aleister
Have you got a link to where that's said? Also, is this conference being filmed live?

Just reporting from Skeptic's thread and then seeing other threads pop up. He didn't talk, apparently, just walked in, shook hands, showed that he lives, and left.

Putin has satellite footage of where MH370 is and will announce within the hour along with archive footage proving US government orchestrated 9/11.

OH that's very strange. I've added to the OP quoting "All major media organizations in Russia have been told to be ready for a major press conference in the next few days" which is the main focus of the article I was going on about, however this Putin disappearance is very weird.

posted on Mar, 16 2015 @ 06:50 AM
link
Even if Putin, or Obama for that matter, announced aliens exist, why in the [SNIP] would you believe them? Opportunists only do things when they have something to gain.

Never trust the man who tells you what you want to hear.
edit on 16/3/2015 by Gemwolf because: Remove censor circumvention

OP the source you give is not citing any other source. It is making things up, taking things utterly out of context.

This whole Putin thing is ridiculous. It is a lot of nonsense.

Aliens??? There are no aliens. You are all just trying to manufacture an illusion into reality.

Poppycock, you silly people. THINK! You make asses of yourselves in full public view!

It's not an announcement about their 'existence' but about their visitations. I'm pretty sure all of us know ETs exist. Billions of solar systems like ours in our galaxy, an estimate of 10,000+ galaxies seen in a 1inch spacing between stars each with trillions more stars and solar systems.

And this thread is about the goings on and what might be announced, not whether you believe what is said or not. And with a major announcement like "Extraterrestrial beings do live on this Earth among us", you will NEED to display evidence to these claims, and with it being such a huge topic, the government(s) will need to show it.
edit on 16-3-2015 by jonwhite866 because: (no reason given)

Here are a few articles on Putin's disappearance as it's "nonsense".

They all ask different questions which is what the original article is doing. That is why you bring it to forums and talk about them. There are also plenty of articles about the Kremlin and this disclosure. If you also read the title of the original link I placed it says "Alien Disclosure!?", again, asking if this is a POSSIBILITY.

I just have to say, that people who portray a very narrow mind such as yourself are the people who have the least amount of knowledge on reality. How do you know what is and isn't? Read what I posted to 'Ridhya'. If you think "there are no aliens" and that we're alone then that's quite ignorant of you.

Could I also add that, if you think things are being taken out of context, please take the time to explain what it is you think's wrong in the article so that we can research said flaws and continue with the main purpose of this thread. Thank you.
edit on 16-3-2015 by jonwhite866 because: (no reason given)

lol pretty sure all of us know that aliens exist?

Is it a new fact that Aliens exist?


I don't believe in Aliens, am I the minority?

Obviously UFOs exist. You find something in the sky that's flying but you don't know what it is. UFO. I'll quote what I said to 'Ridhya'.

"Billions of solar systems like ours in our galaxy, an estimate of 10,000+ galaxies seen in a 1inch spacing between stars each with trillions more stars and solar systems just like ours." If you calculate that spacing and the number of galaxies found in it to the rest of the sky, you're looking at a number of galaxies that pass any known number. We're constantly finding Earth like planets every month which could hold life. A universe so vast with so much going on, things that we don't understand yet, and you think Humans are the ONLY ones?

But it really depends on what you define as Alien. If anything living then we've already found many living organisms on other planets that don't originate from our own. Alien. But there is no doubt in my mind that from the amount of stars and planets in this universe that don't add up to a known number, we are not alone.

And everyone may not "know" ETs exist, but you can be damn sure everyone holds the possibility to it, like yourself, otherwise, why else would you involve yourself with a thread about alien disclosure? The questions tick in people's heads, some ignore them, others run away from them, and many question them. Which one do you think will benefit our race more and help us in our journey to discovering where we're from and why we're here? I guess time will tell, but learn to accept what could be before dismissing it, otherwise if you find out you're wrong, you may not take it well.
edit on 16-3-2015 by jonwhite866 because: (no reason given)

Disclosure movements have been saying since at least the 80s that its just around the corner... and here we are decades later no further. No better videos or artifacts or tissue samples... but what we do have is a lot of illuminati media stating that an external enemy from space would be an ideal method to unite the world under one government... suspicious, no?

Thank you for your lengthy post, there was no need to repeat your point as I already understood that the galaxy is vast and that alien life might exist. I just don't believe they do. I believe we have been here for a long time, and there has been no material evidence of any such visitation of any Alien entities, not even life in our own solar system has been discovered.

We have no signals that we have received or any type of communiqué, or even a facebook poke as such whatever way an alien would do that, maybe paint something on our moon or whatever, and our solar system has been around for billions of years, so if you believe in evolution then aliens (if they existed) will most certainly have evolved way before we have and would have gone out exploring the galaxies long ago, if that is not the case then maybe physical technology just doesn't allow for aliens to travel across the universe and so therefore we will never know.

I am more inclined to believe that the UFOs which we don't have explanations for, which are outright paranormal, could be demonic entities.