Protesters took to the streets across Brazil on Sunday to call for the impeachment of President Dilma Rousseff, as anger intensifies over increasing economic hardship and the multibillion-dollar corruption scandal at state oil company Petrobras.

Tens of thousands of demonstrators swarmed around ministerial buildings in the capital Brasília and along Copacabana beach in Rio de Janeiro early on Sunday, while at least a quarter of a million people were expected to join protests across other cities.

“They will set the tone as to the level of popular discontent and mobilisations that Rousseff will confront in the coming months,” said João Augusto de Castro Neves of Eurasia Group, a political risk consultancy. “More important than [Sunday’s turnout] will be whether these protests lead to a more sustained . . . movement, including that of organised labour,” he said, pointing to recent strikes by truck drivers.

Three weeks ago, truck drivers set up roadblocks across a third of the country in protest over higher fuel taxes among other costs, leaving supermarket shelves bare and disrupting soyabean shipments. The government was forced to give into most of their demands.

It's pretty messed up, especially considering the number of religious fanatics and media outlets that have been supporting this and telling people to join.

A quick reminder that the last time the media has supported this type of thing, we ended up under a military dictatorship. 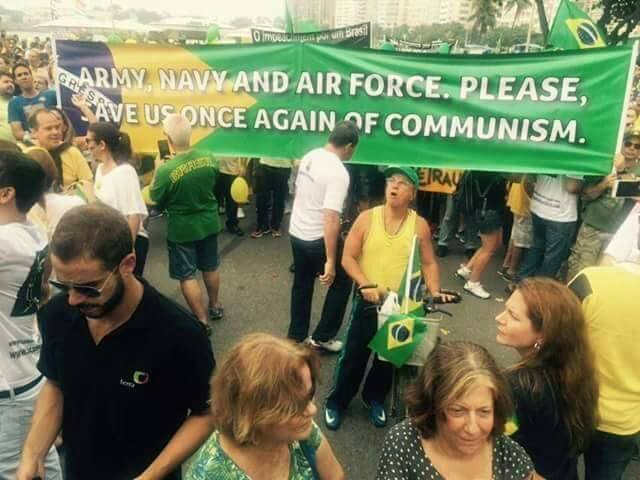 People seriously believe that they're fighting against communism...?