Another "god" moment . The Bilby . One more endangered Aussie .

posted on Mar, 13 2015 @ 05:42 AM
link
I put this in Cryptozoology because not so long ago there were 2 species of Bilby but sadly the lesser bilby is no longer with us . The good news is that the greater Bilby is still with us although endangered . For those of you that might not know what a Bilby is i have attached a photo . But below i ask a real question . 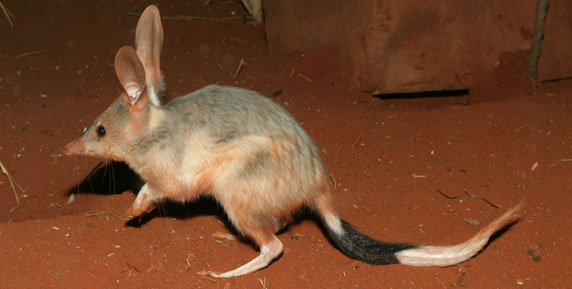 I refer to this as being a "god" moment because .... well look at it ... he had some spare parts left over and luckily we have this little tripper . In one of his better moments he shrunk a kangaroo , stuck a mouse head on it and added rabbit ears . 9/10 for creativity god . Yes i know not ten out of ten but that's another thread . This is about the Bilby so here is interesting fact No 1 .

The female bilby's pouch faces backwards, which prevents the pouch from getting filled with dirt while she is digging.

In keeping with threads of this type i have the heart warming video of baby Bilbies below . Yes i know it is a zoo video , but to be honest there are not many quality videos of this animal in the wild .

A bit more info before i get to my point . Fact No 2

They are nocturnal omnivores that do not need to drink water, as they get all the moisture they need from their food, which includes insects and their larvae, seeds, spiders, bulbs, fruit, fungi, and very small animals. Most food is found by digging or scratching in the soil, and using their very long tongues.

So these animals are living happily munching away on insects spiders and such when we come along .


The bilby lineage extends back 15 million years.[17] In 2014 scientists found part of a 15-million-year old fossilised jaw of a bilby which had shorter teeth that were probably used for eating forest fruit. Prior to this discovery, the oldest bilby fossil on record was 5 million years old. Modern bilbies have evolved to have long teeth used to dig holes in the desert to eat worms and insects.

Yes 15 million years then us . But below is what concerns me .

After $80 million worth of environmental studies by Woodside, including $3.848 million paid to AECOM Australia to prepare environmental studies and reports, the company claimed that no resident Bilby colonies were to be found at the project area, despite evidence such as burrows and diggings.

Yes 80 million dollars and evidence of Bilbys it was still ok to go ahead . 80,000,000 gets then there own satellite feed . But no these animals were saved by a bunch of amateurs . How can this happen .

Footage and still photos of a Bilby at the site were taken on the weekend by community members concerned about the proposed works.

Yes we nearly missed out on a colony of these . 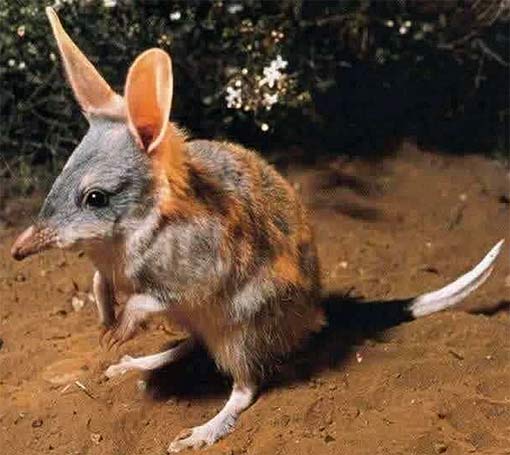 This all ended good with this announcement .

In April, Woodside shelved plans for a $45bn land-based gas hub at James Price Point, following ferocious opposition from environmentalists and residents of nearby Broome. Woodside cited economic reasons for its decision.

Ok it ended well in this case . But there are huge tracts of Australia taken up with mining , and they all do environmental impact statements .


Australia needs to export . I get that .

Same family i believe , a bit like kangaroos and wallabies .

Thanks. I always wondered about that. We used to have quite a lot of bandicoots in this area but they have died out a bit. Sometimes I see them at night so they might be making a comeback.

Hopefully they can keep these from going extinct. It's always sad to see most anything go extinct (I'm leaving out roaches and locusts). It makes you wonder what else has ever existed that we still have absolutely no clue about.

posted on Mar, 13 2015 @ 07:11 AM
link
The bilby 's biggest problem is the scum called feral animals , cats foxes and wild dogs , these little guys haven't got a chance against these carnivores , I watched a docco on them , some farmer has fenced off hectares of land with 6ft fence to protect these guys , he breeds them up then releases them back into known areas that haven't got a big feral problem. Years ago there was a call in Australia not to buy Easter eggs but to buy the chocolate bilby to raise money for their existence

posted on Mar, 13 2015 @ 08:17 AM
link
What adorable little creatures! Aussies have some cool animals! It's always nice to see pics, but seeing the vid was even better!

Well that farmer deserves a big thank you! And a grant of some sort!

They are adorable! I hope they make a comeback


And kanga? You forgot mosquito's!