Jasper and Bow-Z are best friends


After just 10 days of being apart from one another (although that may be longer in dog years) Jasper the cat pounces on her canine companion Bow-Z and keeps on hugging him, and hugging him....and hugging him. 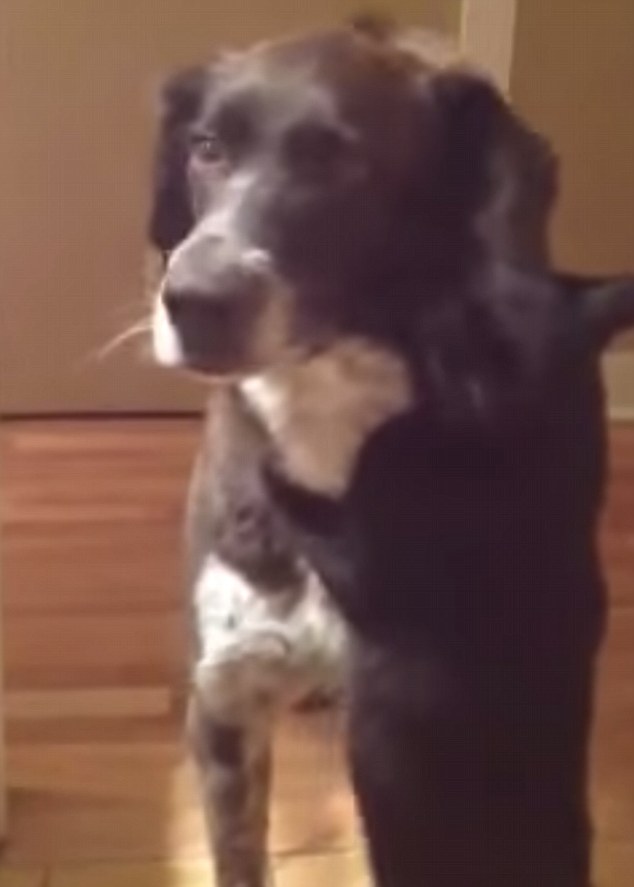 As soon as Jasper catches a glimpse of Bow-Z she can't help but wrap her tiny arms around his neck.

'Meow,' jasper exclaims several times as if to say, 'I missed you so much. How could you ever leave me?'

This is how my dog is every weekend with my daughter when she comes home for a visit. Every Friday morning, all I have to say is, "Is Kaitlynne coming home?" The tail starts, the barking starts, she starts spinning and immediately has to go running outside to go look for her. She loves my daughter to death! The second she walks through the door, she latches onto my daughter like a leech. She spends the entire weekend on my daughter's lap, and sleeps in her bed. LOL


Me too. It's adorable how 'human' they are, or how 'pet-like' we are. However you wish to see I guess. LOL

Yeah, I thought the dog looked like, "dang, I thought I was rid of you"

posted on Mar, 13 2015 @ 08:27 AM
link
As much as I would like to see a cat "hugging" a dog because he missed him, what I really see is a cat exhibiting overstimulated behavior, expressed by latching on and probably biting poor Jasper. Cats and dogs don't think in terms of "I haven't seen you since last Tuesday. 'Sure did miss you." They're very much in the here and now.

i've never seen a cat be THAT affectionate to a dog before. thats absolutely cray cray adorbs

i can only imagine what the cat would have done if the dog were away for months. probably would have lost it's damn mind.

originally posted by: graceunderpressure
As much as I would like to see a cat "hugging" a dog because he missed him, what I really see is a cat exhibiting overstimulated behavior, expressed by latching on and probably biting poor Jasper. Cats and dogs don't think in terms of "I haven't seen you since last Tuesday. 'Sure did miss you." They're very much in the here and now.

I was going to respond to this nonsense, but thought the better of it.

Exactly. The dog is in avoidance and not happy. The cat is super excited (not in a good way) and biting the dog. A cat or dog that grabs with his front legs is more in prey mode than anything. They don't "hug" like we do.

posted on Mar, 13 2015 @ 09:57 AM
link
The cat was biting the dog not "hugging" it. If my cat pounces on my hand he'll bite and latch on with his claws the more I try and pull away. The cat seemed to be playing with the dog if anything. Lame.

posted on Mar, 13 2015 @ 10:12 AM
link
i don't think the cat was actually biting the dog at all. you can see it hop up the first time and you can see the cats tongue as it's licking the back of the dogs neck. the dog is also wagging it's tail the entire time and the dog didn't try and use it's paws or mouth at all on the cat. not even in a "hey, get off of me jerk" kind of way. you can also see the cat licking the dogs neck again near the end. the cat is definitely a little clingy, but i don't think it's being a dick and biting the dogs neck. i'm willing to trust the owners in regards to the behavior and agree that the cat definitely missed his fuzzy little doggy buddy.


Have to disagree with the "kitties don't hug" bit. My black cat absolutely hugs me. He jumps in my lap, wraps his arms around my neck and purrs in my ear. And he wants to be hugged back. He loves hugs.

Kitty was nibbling the dog a little bit, not biting him. This is "hey I missed you, can we play?" My orange cat is also affectionate and playful towards my dog, while my dog has the same reaction as this one ... aloof and a little confused. I think the dog just is not really understanding the cat's behavior. They speak a different language.

originally posted by: Bilk22
I was going to respond to this nonsense, but thought the better of it.

Calling it nonsense without giving a reason why is either lazy or cravenly.

Look at the cat's posture and listen to the sounds he makes. He's holding on tightly, trying very hard to bite (most likely "play bite") the back of the dog's neck. And he's meowing in a way that doesn't sound like a contented cat. There's even some hissing going on. The cat is either expressing dominance or aggression, marking the dog as his territory (notice the licking after the first bite to spread his scent) or he's simply playing aggressively. For a cat, it could be all three.

When the biting is accompanied by howling, hissing or scratching, it's likely aggression instead of play.

That's not to say that cats can't hug. Sure they can! It's just that this particular cat in this particular video is not hugging for affection or because 10 long days went by on his cat calendar sans dog.

He wasn't being aggressive ... there is no hissing going on. The lady filming does some funny breathing sounds, like she's weezing through her nose. That's the hissing sound you hear.

Of course it's also possible that the dog has rolled in something with an interesting smell, and that's why kitty is so fixated on him.

But he's not being aggressive, just persistant and annoying. After watching it again, I now think the cat has picked up an interesting scent on the dog - hence trying to hold him still to lick and smell him. I've seen my black cat react badly to the smell of something my dog got into. He went from sweet lover boy to angry holy terror from hell for 4 days afterwards (BTW - Feliway is a miracle worker for angry cats). But this kitty's not mad, just very very interested in something - either a dog he missed, or a scent on the dog.

It might be helpful if we knew where the dog has been for 10 days ... a camping or hunting trip maybe? At another house with other animals? Or maybe even the vets office?
edit on 13-3-2015 by eeyipes because: (no reason given)

My response was in regard to this statement of yours.

It's just that when we can stop anthropomorphizing animals, they'll be much happier and so will we.

Animals do feel and exhibit the emotions portrayed in the video and suggested by the owner. There are plenty of examples of this and also examples of this between species as well. So I'm not sure why you believe there's a problem with ascribing human emotions to actions we see our pets exhibiting and why that would be a problem or make anyone, including our pets, unhappy. That is all.

Sorry, but I've spent too much time with too many cats to mistake it.

I don't see any aggression in these pics. I have three cats and a German Shepherd. One of my cats and my GS do love each other and often will sleep side by side or even nestling. Not sure why people have issue in believing they are capable of this.

I think there was a recent thread showing various animals, even predators such as tigers and bears, playing together, cleaning one another and sleeping together.

I didn't say they are incapable. I only said I didn't see it in this example.