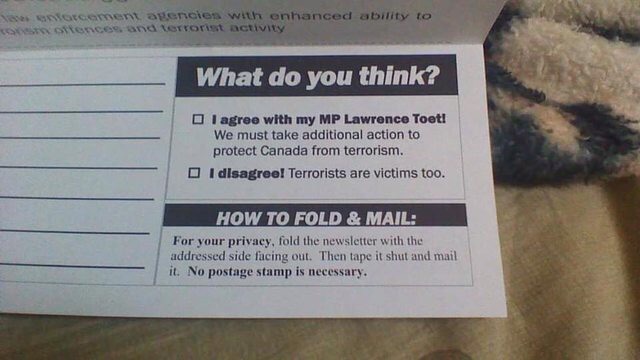 Any Canadians here wanna drop in and educate us on this person? I find this disturbing and reminds me of Bush telling us that we're either with him or the terrorists.

Everyone who receives this should tick I Disagree just to piss them off.

Most "terrorists" are victims anyways...


Except the ones in suits with a political title.

Not sure who this guy is but he's obviously a reforma-CON. Harper (Prime Minister)and Toews (Minister of Public Safety)used similar, identical actually tactics as Bush on their "internet crime bill" (C31 I think) Stating "you are either against the paedos or for them" while trying to pass this draconian/Orwellian piece of garbage.

These guys read right out of the Koch Brothers handbook!

P.S. Toews had previously had an affair with his babysitter whom may or may not of been underage at the time, and later impregnated .

Real piece of work these fellas.

ETA: Seems they're trying to ram through the same or worse piece of dung as mentioned above just with a different name.
edit on 3/12/2015 by Kukri because: (no reason given)

Any Canadians here wanna drop in and educate us on this person?

He's a nobody Conservative MP for a small section in the City of Winnipeg known as the Elmwood-Transcona area.

Just to give you an idea of how little of an effect this nobody has in Canadian politics - I had to google who the hell he was... and I live 2 hours outside of Winnipeg !

Needless to say, he's the laughing stock in every Winnipeg newspaper and news station that I've read in the past 5 minutes.

He highly underestimated the intelligence levels of his constituents.

Thanks CS I was going to do a search but I'm sure he'll be plastered all over the Dailies tomorrow. It'll be interesting to see what dirty, sleazy skeletons get pulled out of his closets.

I'm sure most would disagree with him either way and that's why he worded that the way he did. Of course he'll have people who agree with him and support Big Brother in the name of a false sense of security.

Good lord, these politicians, how the hell do they remain in office with actions like that?

Comforting to know he's a nobody but let's hope others don't think along the same lines... well nevermind because of course they do, they're politicians.

Keep us posted on any news on this guy in the coming weeks, if there's any at all

ETA: Don't forget we are part of the "Five Eyes" so we spy on you guys so they don't have to. Don't you just love the way they bend us overwithout so much as a reach around.
edit on 3/12/2015 by Kukri because: (no reason given)

The Harper people are pulling a 3 stooges act this week, falling all over themselves with their stupidity, blunders and nefarious laws to kill our rights. I do think most of us are sick to death of Harper's regime. I wonder if GWB knows how much Harper emulates him still.

originally posted by: Swills
a reply to: Kukri

Good lord, these politicians, how the hell do they remain in office with actions like that?

I guess it helps when they write the laws and sign the paychecks.

I wonder if GWB knows how much Harper emulates him still.

I'm sure he knows it well.

If we were to phone up Bush Jr right now, all he'd have to do is look down to ask the man himself.... Mind you Harper would have to clear his mouth of any obstructions before he could answer Bushie's question.

Ah, thou hast a definite gift for the descriptive, ROFL.

posted on Mar, 12 2015 @ 10:59 PM
link
a reply to: Swills
Common practice for these scumbags..last time they tried to pass an internet snooping bill and the minister in charge proclaimed if you did not support the bullsh#t that you were supporting child molesters.
That was a year or maybee a bit more..bill was repackaged and passed a few days ago..same B.S. different pile.
www.macleans.ca...

posted on Mar, 13 2015 @ 02:09 AM
link
Classic psychological warfare... word two narrow options specifically as a leading question, where one is unacceptable. Classic Harperism. Thankfully this guy is a nobody. They should reword it to, do you support Stalinist dictators? Or do you prefer Freedom!

posted on Mar, 13 2015 @ 03:13 AM
link
Harper is just a wannabe Bush, and thinks Canadians are dumb enough to let this pass.. Yeah right.. He's been digging his own grave and next election his majority will cease to exist.

posted on Mar, 13 2015 @ 06:28 AM
link
The harpercons are a bunch that just keeps giving .Don't be surprised is he pulls of some obscure progeration kind of move to extend his reign past the election date .

I wonder if all the con's still beat their wives,,,, or not ? They have pissed off so many people over the past that ,even the Ukraine Nazi stooge supporter Baird has decided to jump ship . I am thinking with the issues in the oil patch with prices falling and workers leaving his Alberta votes are going to fall as well . Jim Prentice's spin through the revolving doors over the past few years is mind boggling to behold . Doe boy Duffies fall from grace and the trial should also give up some more results for us to gaze at before the next election if it doesn't get pushed into the future .

With such a big hit list for the other parties to remind Canadians about ,I suspect attack add revenues should increase our GDP and we have a complete recovery in our economy .