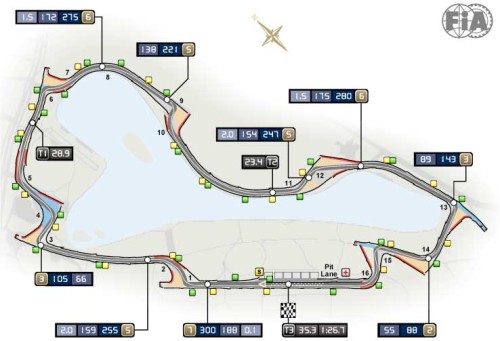 Tires that will be used for this grand prix are the medium tires (white) and soft tires (yellow).

What can we expect? for sure that Mercedes is the favorite to win this opening race of the 2015 season, but behind them it will likely be a close battle between the teams.
There is uncertainty about Sauber, they might not be able to take part in the first race of the season because there is a possibility that their gear will be seized.
While Sauber already had a contract with two race drivers for the 2015 season, (Adrian Sutil and Giedo vd Garde) they also assigned two other race drivers (Felipe Nasr and Marcus Ericsson) for the 2015 formula one season.
Since every team has only two cars on the grid, it is a bit of a problem to let all four of them take part in the races, but they brought money with them for the race seat and will want what they paid for.
Adrian Sutil seems to be ok if he is bought out, but Giedo has filed multiple lawsuits against Sauber and won them all, an appeal from Sauber this morning was turned down by the court in Australia.
So it seems that Sauber has to honour the contract which it has with Giedo vd Garde, or their gear can be seized i think if they refuse to do so.
Of course, if Giedo is handed the race seat, either Felipe or Marcus and their sponsors will not be happy.

posted on Mar, 12 2015 @ 08:17 AM
link
McLaren appear to be struggling. They've had very little testing because of a design flaw in a seal on the MGU-K system. This was a common issue for most of the engine manufacturers last year but most of them had it worked out by the 1st race of the season.
Honda did send out a redesigned seal but it also failed which resulted in McLaren using their own MGU-K seal they manufactured when Mercedes had the same issue last year.
So once they used that seal they did manage to get some running in but they reckon they only completed about 1/3 of the work they had hoped to achieve during the off season.

McLaren Honda is a legendary pairing so hopefully they can get a good year under them and looking to fight for the championship next season.

Stupid Sauber, if you make a contract and get paid during `14 by sponsors so the driver has a seat in `15 you have to let him drive and can`t just sign up other drivers to get more money...what were they thinking ?

It will be interesting to see where each team will be in terms of speed.

How is the weather going to be ?...I`m now going to watch out for rain every Grand Prix with Max.

Verstappen wins again in rain-hit second race at the Norisring

The past is not a guaranty for the future but yes, i think they will no doubt learn and be strong towards the end of this year and certainly next year.
I predict them to be contending for place 10 and lower during the first races but that will change in Spain a think.

The last couple of years weren`t that successful for Honda either, but building excellent MotoGP engines, they should have knowledge to build good engines nonetheless.

Sunday weather is 20% shower change, but a clearing shower...does that mean an early in the morning possibility shower...?
edit on 12 3 2015 by BornAgainAlien because: (no reason given)

A lot of people are actually quite stunned to see how this is playing out so far, this because Monisha Kaltenborn seems to have a juridical background.
So far, she is not doing so well i think
The latest rumour is that the contract with Giedo had been terminated by Sauber, but i doubt this can be done on one side of the table.
A few jokes were made already, a new Sauber with two or three seats at the start so there is room for all four race drivers and maybe even two more 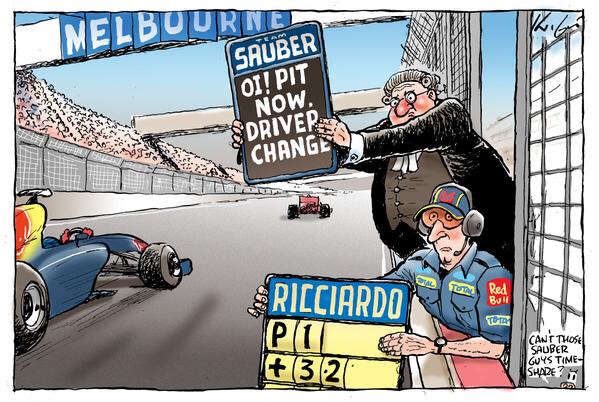 For Max this will be great, he has shown to be quite fast in the rain.

They simply have no other choice as to let Guido drive in one of the cars...I can`t believe they are so stupid to still try and block it.

It`s not like Guido is a bad driver, but they will get in trouble with the other paid money for one of the drivers.

I think they thought they could just buy him off, but you have to arrange that before you`re signing the new contracts...it`s their own fault, and now they just have to let him drive, no other choice.

That`s a bit too late for rain...and at 12:00am Sunday some rain still, so my guess will be Sunday during race also dry (as usual, I can`t remember AUS being wet that many times).

posted on Mar, 12 2015 @ 10:03 AM
link
Dark clouds above Manor Marussia, they might not be able to drive because they are not in possession of the data for the software according to auto und motorsport.
According to Michael Schmidt all the data was erased from the computers so that they could be sold.
While this does not seem to be a big problem, it takes time to install the data again, and it seems that Manor still has some bills to pay to Ferrari before Ferrari hands over the software for the driveline.

posted on Mar, 12 2015 @ 12:15 PM
link
So hoping that McLaren have a better season than they expect. I'm a lifelong fan and I wish the new partnership the very best of luck over the next few years.

They have had so many failures and really do deserve a break after everything that has happened. As a team for the last few seasons they have thrown massive amounts of cash into the car but no no avail.

Fernando desperately want another WDC before he retires and has probably the highest ability on the circuit when it comes to making the very best of a bad car. so the early performance and overall package I think, will be easy to evaluate by watching both drivers lap times. As the car gets better it should start to suit Jenson, more and more.

Good luck McLaren-Honda may the Force (India's) not be with you LOL!

posted on Mar, 12 2015 @ 06:59 PM
link
Apparently Perez has helped Giedo with a pass so he could enter the F1 paddock, so he did and went to the garage of Sauber to prepare himself.

Also it seems that for the free practises a superlicense is not needed and according to Charlie Withing it should not be a problem to get one because Giedo meets the requirements to get one.

Now, this giedogate is a real life soap

Giedo van der Garde holds an FIA class A competition license, which allows him to test drive an F1 car only. He does not require the full F1 super license to drive in FP1, which of course means this negates the debate over whether he has or can be awarded the full FIA super license required for qualifying.

Charlie Whiting indicated yesterday that there was still time for Van der Garde to be awarded the full racing license, because he meets the criteria and all that is required is for Sauber to complete some minimal paperwork.

It will be clear to the court whether since their order was confirmed Sauber have any intention of complying or not. Further, it will not require the court to wait until after the actual breach occurs i.e. qualifying begins – to rule that Sauber are in contempt of court.

It would appear the litmus test of whether the Swiss F1 team are in breach of court order will be whether they have completed the necessary paperwork for Van der Garde to be awarded his super license and race.


I understand that a team of bailiff-sheriffs is ready to go the Sauber garage if requested. It wasn't hard to find volunteers for the job


With respect to the interest of motorsport, and F1 in particular, i have decided to give up my legal rights to race this weekend.
As i am a passionate race driver, this decision has been very difficult for me.
However, i also wish to respect the interest of the FIA, Sauber Motorsport, as well as Nasr and Ericsson.
My management will continue talks with Sauber early next week to find a mutually acceptable solution for the current situation.
I am confident such solution will be found and i will inform the media once done.

So Sauber will certainly be able to take part in this opening race which is great for the sport and of course for Felipe and Marcus.

I wonder how this will fare in the rest of the weekend and certainly in Malaysia where it will be a lot warmer.

Not so good for Renault, but at least the STR10 shows to be a decent chassis. Only able to do 6 laps in P2, Max is going to be behind in terms of set up, but it happens.

Mercedes seems to still be ahead, Ferrari nr.2 and Williams the nr. 3 team.

McLarren at the back with big problems as expected, RB not top 3, but more at the places 4-8. Force India is going to end up at the back probably when McLarren gets more in the group RB/STR/Sauber/Lotus.

It seems the pecking order for now is going to be probably :

Places 4/9 will be defined a bit better later on, but are possibly going to stay reasonable close to each other in the first part of the season...that will make some good competition between the teams/drivers.

Kvyat got outpaced by Ricciardo and Red Bull doesn`t seem that strong.

McLarren is still lagging as to be expected.

Force India not being competitive enough.

Max got outpaced by Carlos, but Max had a bad weekend by only able to do a few laps in P2 and being behind the curve the rest of the time. The gap wasn`t that big in Q2 with Carlos, considering he was complaining about more pressure on the right shoulder (I`m guessing the balance wasn`t optimal when accelerating). So for a bad weekend it wasn`t that bad with 0.2 being behind his teammate. He had a big moment in his last qualifying lap also it seems, that can happen.