posted on Mar, 11 2015 @ 10:42 PM
link
It is such a small thing that I didn't even find an article in English. Basically, the site that offers information about the bus lines in Curitiba, a city in the south of Brazil, was hacked this afternoon. The people in charge have regained control and posted something about it. 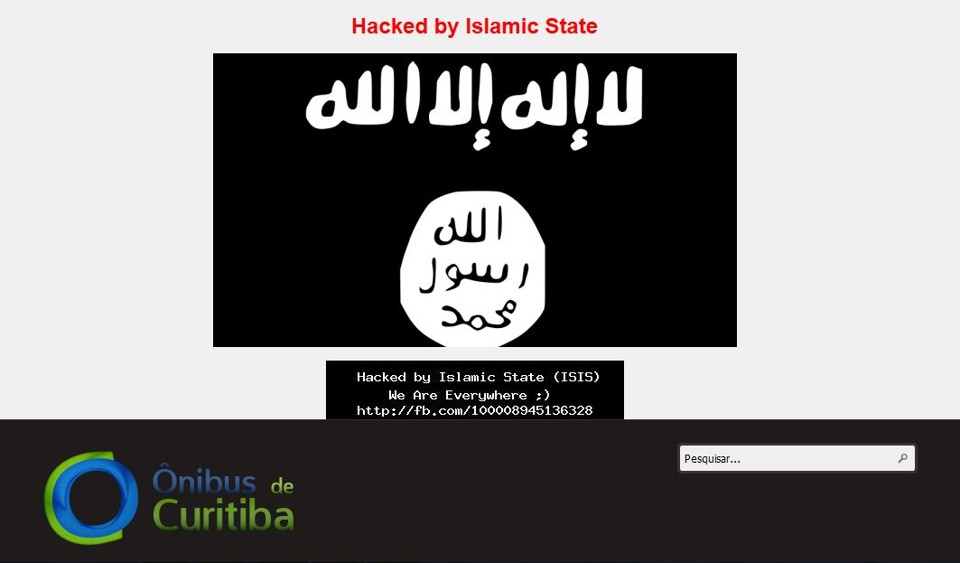 Message about the hack (in Portuguese)

They keep it very simple, despite being a bit long. They say they have no doubt it was done by IS, mentioning an article published by The Columbus Dispatch.

Then, there's a brief explanation about the hacks going on around the world.

They also say that this hack had nothing to do with a bus that was set on fire early this week, since the hackers didn't bother claiming that action as theirs (a bit optimistic, but I agree the two things are not related - people have been burning buses in Brazil for a couple years now whenever they get unhappy with the government).

Finally, they finish the message by explaining why their site was somewhat an easy prey, that they have to up their security and then make fun of the fact that, as soon as they put the site back up in its normal version, the first ad to show up was an antivirus one to protect both computers AND websites.

ISIS is going after all Christian nations.

Context: that's a somewhat old video... a video of some Brazilian soldiers was posted online, where it shows them all dressed up and serious as the national anthem starts playing... until the rhythm changes to Brazilian funk and they start dancing their little butts off.
edit on 11/3/2015 by LukeDAP because: added better video

posted on Mar, 11 2015 @ 11:05 PM
link
Who really believes that ? I mean hacking a Brazilian site about buses ? Really ? Why would the IS hack a site like that ? I just can't believe a group like IS would spend time hacking small sites no one cares about. So who's doing all these hackings ? Is it a means to scare all of the western nations ?

Yeah, I honestly can't see the terrorists in the middle of the desert going all "oh, I know! We should make Brazilians feel threatened by hacking a site that has 10 viewers per week!" I mean, I'm more surprised by the fact anybody noticed in the first place.

Who's truly behind it? People who "sympathise" with IS and their... ideas, but aren't willing to get out of the country and join the war? Teenagers who have just found out how to hack sites and are now high fiving each other for the next month or so? Agencies that want people to be afraid of IS and okay with another war in the ME?

All somewhat possible, IMO, although the teenage hackers scenario is the most likely one, truth be told...
edit on 11/3/2015 by LukeDAP because: spelling/grammar

edit on 020152015k23111America/Chicagothpm by Look2theSacredHeart because: Never mind. I was being redundant.

originally posted by: gosseyn
Who really believes that ? I mean hacking a Brazilian site about buses ? Really ? Why would the IS hack a site like that ? I just can't believe a group like IS would spend time hacking small sites no one cares about. So who's doing all these hackings ? Is it a means to scare all of the western nations ?

posted on Mar, 15 2015 @ 07:08 AM
link
I doubt political extremists do anything for no reason.
Why else go through the trouble?
I found some minor details in this article suspicious.

They could possibly radicalise me by hacking West Midland's Transport and ensuring the timetable are correct.

But yeah, this is just some jolly trolling.