posted on Mar, 11 2015 @ 07:11 PM
link
This may be old news to ATS but I want to share, nonetheless. Using the instruments on board the Cassini spacecraft, the team measured the size and number of silicon-rich particles, called silicates, in Saturn's second outer-most ring, the E ring. The E ring is made of particles that came from the moon's plumes and therefore tells scientists something about what is going on underneath the surface.

Enceladus floating in space beneath Saturn's rings with a larger moon, Titan, in the background. Scientists first discovered that Enceladus was spewing jets of water vapor and ice back in 2005. This discovery rocked the scientific community because it indicated that Enceladus hosted liquid water underneath its surface. That was the first time astrobiologists began looking at Enceladus as a possible place to harbor alien life.
Then, in 2009, scientists discovered that not only was there an ocean, but it was salty, like the oceans on Earth.

And now there's compelling evidence that deep beneath the moon's icy surface, these salty oceans contain active hydrothermal vents like the vents of the Lost City.

Just another piece to the puzzle, ATS! It seems that NASA's baby steps have turned into strides. The final piece will be put in place when we get a mission to Enceladus to investigate. I've mentioned my Ouija board experience before here on ATS where the board told me that there is life on certain Moons in the Solar system; namely, Enceladus! I'm getting a tingle in my spine! What says ATS?

posted on Mar, 11 2015 @ 07:21 PM
link
NASA's baby steps into strides? How much did they receive in funding last year alone? Surely not enough. It's cool it really really is, in fact I want to live out my dream of being an astrophysicist through my daughter (one of them) but ya know, wouldn't it be cool if we just better understood our own planets behavior and spent the equivalent of NASA's budget on ocean exploration?

Sorry, didn't mean to troll. It is pretty cool.

originally posted by: mikeone718
Pretty cool all right, but I want to hear more about your ouija board findings

Well, I don't want to go off topic but the Ouija board experience was years ago. Life on some of the outer moons of the Solar System was one of the few things that I remember.

Exciting news for sure. The vents would make for easy access for our probes, unlike on Europa, where we would have to bore through Km's of ice. Well, who can argue with ouija... the board knows!! 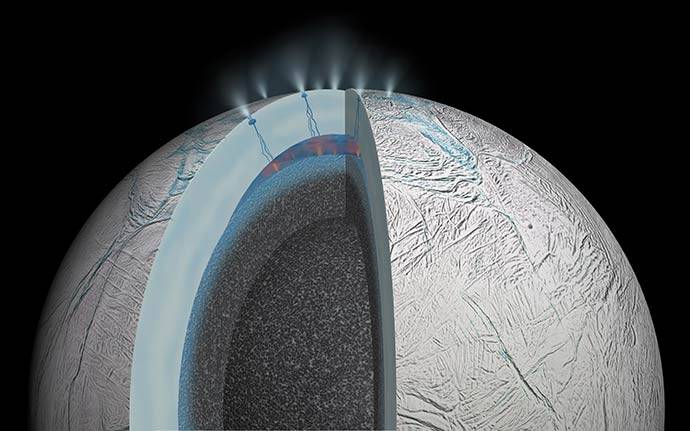 NASA's Cassini spacecraft has provided scientists the first clear evidence that Saturn’s moon Enceladus exhibits signs of present-day hydrothermal activity which may resemble that seen in the deep oceans on Earth. The implications of such activity on a world other than our planet open up unprecedented scientific possibilities.

“These findings add to the possibility that Enceladus, which contains a subsurface ocean and displays remarkable geologic activity, could contain environments suitable for living organisms,” said John Grunsfeld astronaut and associate administrator of NASA's Science Mission Directorate in Washington. “The locations in our solar system where extreme environments occur in which life might exist may bring us closer to answering the question: are we alone in the Universe.”

Hydrothermal activity occurs when seawater infiltrates and reacts with a rocky crust and emerges as a heated, mineral-laden solution, a natural occurrence in Earth’s oceans. According to two science papers, the results are the first clear indications an icy moon may have similar ongoing active processes.

This is all good information for finding life. The scientists think it may be like Lost City in the Atlantic Ocean, if so then we will have a variety of life.