posted on Mar, 11 2015 @ 04:59 PM
link
This video is a peek into the future. Don't deny it, it's coming. Wether you can avoid it or accept it is the question. Learn some survival skills while you can because the "future" my not be something you want to be a part of. 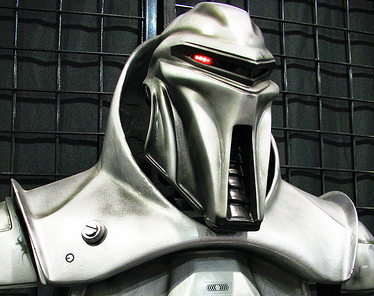 Robot "I repeat, Drop your weapon. This is your last warning"

Without spoiling the video, I will say that a child receives a robot companion for Christmas and interesting things begin to develop.

I put this thread in "The Gray Area" so members could openly speculate about what living with a robot companion in the future may be like. I'm especially curious how you feel a child may be impacted by living with one at an early age.

Where a robot is designed to perform with efficiency and precision, children are often reckless and without reason. This combination creates an interesting scenario for both the child and robot. What could possibly go wrong?

Anyways, count me out. Robot's be trippin...

posted on Mar, 11 2015 @ 05:19 PM
link
Oh, wow that was incredibly creepy. It takes a lot to creep me out but that did it. I really don't know what else to say except that maybe a robot companion isn't the best thing to have.

I make the world's greatest meatballs. Just throwing that out there.

I'm not too proud to say I'd get a sex robot. And if it can wash my car and make me sandwich I'd be a happy camper. And I don't care about kids. Screw kids. They're noisy and smelly and stupid.

What if you were handicapped?

I know some women who call a plumber when their toilet clogs. Maybe they could use one? How about a robot named "Jack" that pops out of your trunk to fix a flat tire? Not that it's too difficult anyway.

My car does amazing things. All I have to do is sit in it and work a few levers. Compared to horse drawn wagons or walking…

My phone, gas heater, TV, washing machine, stove, all save me countless hours of chopping wood, traveling miles to talk to someone, cleaning my clothes, cooking food.

All these robotic devices give me time to sit and ponder what a 'robot' would be like to live with.

You want companionship or love get people and pets.

There is more than one definition of "robot", but the word usually carries a humanistic tone.

Some people don't have the mental capacity for friends and pets and love is certainly never guaranteed. The first people to purchase a companion are those who are socially awkward and morally irresponsible. Then there are those who would ask how many holes it comes with. Next come the elderly. Oh, and don't forget Joe lazy who can't get off the couch to grab a beer.

The problem isn't when, it's how are they going to convince us we need them. Good thing for them, it wont be that hard. Just look at the new barcode everyone has slapped to their wrist courtesy of Apple. I mean, the robots have to have something to identify us by, right?

originally posted by: intrptr
a reply to: eisegesis


I fear one day the "robots" will want one too.


originally posted by: intrptr
a reply to: eisegesis


I fear one day the "robots" will want one too.

posted on Mar, 11 2015 @ 09:02 PM
link
Great video, but what I really enjoyed was the music with the non-English lyrics that accompanied the part where the child and robot are playing together- I'm not sure if they were even singing anything comprehensible, but it sounded cool.

I'm really not afraid of it. I'm more afraid of what hackers or what enemies will do with them militarily. Keep in mind, there're plenty of people already on this planet with practically zero empathy towards other human beings. They're, in most circles, known as psychopaths, or sociopaths. What's really creepy about them is they could be your closest friend or nextdoor neighbor and you won't know. They fit in, make some of the best jokes and seem completely normal. And yet we live in a world where a bomb or emp or biological attack could kill millions overnight and potentially billions, given the right circumstances. Imagine if one of those psychopaths was powerful enough and clever enough and crazy enough to use some of these weapons on a population?

I think we'll have robots which can do things in the future, but there'll be so much security you have far more to worry about just driving to work. What if the breaks fail and you're driving down a steep road? My point? We'll never live in a perfectly safe world, with or without robots, but people will fear robots enough to make sure they're used responsibly. If humans can handle nuclear technologies, they can probably handle robots too. I don't think it's a smart idea to throw away every technology which can potentially cause harm.

I know people are going to think I'm a fool and naive. But you know, humans have faced a lot in history and persevered, I doubt robots will change that.

(i also think robots aren't goign to be THAT visible... at least for a while. will be used as drones and for search and rescue at first. and keep in mind robots have alreayd been used for a long time in industrial settings.)
edit on 11-3-2015 by jonnywhite because: (no reason given)