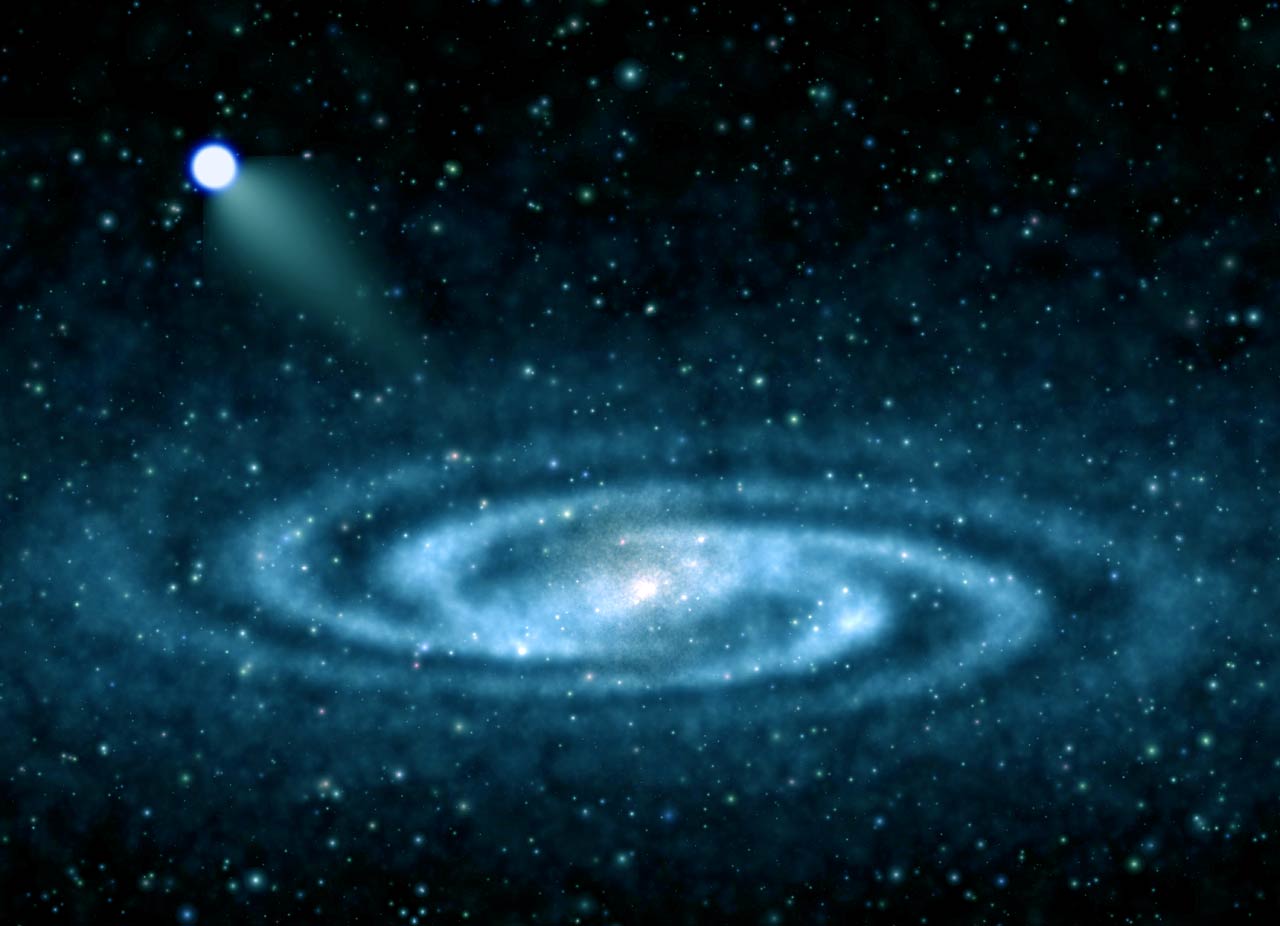 A team of astronomers, including University of Hawaii at Manoa astronomer Eugene Magnier, used the 10-metre Keck II and Pan-STARRS1 telescopes in Hawaii to find a star that breaks the galactic speed record. It travels at about 1,200 kilometres per second (about 2.7 million mph), a speed that will enable the star to escape from our Milky Way galaxy.


Astronomers first thought its velocity developed from the black hole at the center of our galaxy until they realized it was travelling faster than any speed a black hole could normally generate. At it's current velocity, it could travel to our moon from earth in five minute.

The star has another peculiar property in marked contrast to other hypervelocity stars: it is a rapidly rotating, compact helium star likely formed by interaction with a close companion.


This is fascinating. Astronomers believe the star originated in a compact binary system and caused a thermonuclear explosion during a helium exchange with its binary twin. Knocked it out of the park. Known as a class of supernova to you and I, they are one of the only few other forces that can abort a star from our galaxy. Chaos in motion. 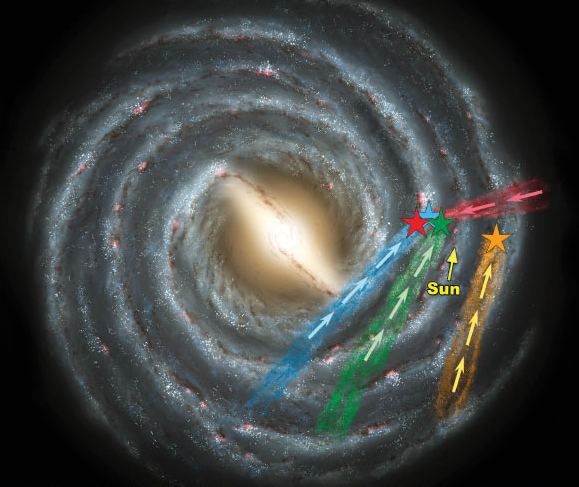 Top and side views of the Milky Way Galaxy show the location of 4 of the new class of HVSs. The general directions from which the stars have come are shown by the colored bands.

posted on Mar, 9 2015 @ 03:31 AM
link
Great find for Astrophysics, I bet there are a lot more interesting finds to be found in the amazingly awesome Universe.

Perhaps some new propulsion theories or energy harvesting could find this worthy of researching.

Something that interests me about these is their effect on their surroundings.

posted on Mar, 9 2015 @ 12:11 PM
link
Although almost impossibly likely, just imagine if it had planets (with intelligent life) still orbiting it!

What a neat way to travell the universe!
Imagine if our own star were speeding along like this and we were still in orbit!

posted on Mar, 9 2015 @ 05:03 PM
link
In the grand scheme of things, several minutes to close the distance between the Earth and the Moon doesn't seem all that quick. Really, you would need to watch this star for millions of years to see it eject out of the galaxy.

What I really wonder about is, can it get out of the Milky Way? Are there other examples of lone stars outside of the boundaries of any galaxy? Perhaps this star's path would get bent as it moves, eventually falling into the orbit at a further distance out from the center of the galaxy. Perhaps it would disintegrate at the unknown barrier that traps all matter within our galaxy.

originally posted by: Asynchrony
What I really wonder about is, can it get out of the Milky Way?


Yes, since it has the galactic escape velocity.

Are there other examples of lone stars outside of the boundaries of any galaxy?

Recently astronomers have noticed a faint glow, that may be a product of intergalactic stars. This discovery suggests that nearly half of the entirety of stars in the universe may reside outside of the known galaxies.

Perhaps this star's path would get bent as it moves, eventually falling into the orbit at a further distance out from the center of the galaxy. Perhaps it would disintegrate at the unknown barrier that traps all matter within our galaxy.


No, if an object has the escape velocity (or above), it will not get captured into the orbit around the gravity it's escaping from. For the Solar System, examples are the Voyager spacecraft and comets on a parabolic or hyperbolic (i.e. open) trajectory. Their trajectories take them away from the Sun's gravitational pull, never to return again.

There is no barrier that traps all matter within a galaxy. There's only the gravity, which can be overcome by achieving the escape velocity. It's basic orbital mechanics, and it's how we send spacecraft beyond Earth's orbit, or even beyond the Sun's gravitational pull.
edit on 10-3-2015 by wildespace because: (no reason given)

Wish I had something better to add.

originally posted by: Aliensun
a reply to: eisegesis

I'm not sure what "limits on what they thought was possible/impossible" were set.

This seems to me that they observed something that they never observed before. In this case, a class of hypervelocity stars that was unlike all of the other hypervolocity stars discovered to date (that is, hypervelocity stars that were set on their velocities by supernova rather than by previously known method, which is galactic center black holes). Sure, they didn't know this specific class of hypervelocity star existed until they observed them, and they didn't have an explanation for the origin of their velocities until they hypothesized about it, but that doesn't mean they thought their existence was necessarily an impossibility.

That, to me, is simply "making a discovery".

originally posted by: Skid Mark
Would that be called a shooting star? Just wondering.

No.. not even close. Let me help you with the internet.

I was actually making a joke.