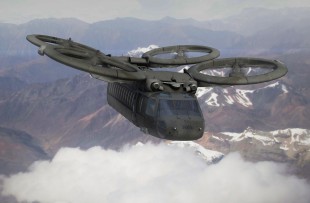 This is interesting. I wonder if it came out of the expo in orlando.

But it looks like the Army is taking the lead in rounding up everyone to get input on what they want to see in joint vtol craft.

Does anyone else know anything about this?

The U.S. Army science and technology community is charting the future of military vertical lift aviation that will enable warfighters to accomplish missions not possible today.

The Army, supported by NASA and the Navy, is combining its areas of technical expertise to accomplish the aggressive scientific and engineering goals necessary to develop a new fleet of joint aircraft, said Ned Chase, deputy program director of science and technology, or S&T, for the Joint Multi-Role Technology Demonstrator/Future Vertical Lift, also known as JMR TD.

JMR TD has been established to address several of the capability gaps that cannot be satisfied by updating the current fleet.

“Let’s figure out what we want this new aircraft to do, and let’s go out and prove that we have the technologies available to meet those requirements. That’s what we’re doing with JMR TD,” said Chase, with the Army Aviation and Missile Research, Development and Engineering Center, or ARMDEC, on Fort Eustis, Virginia.

This was originally going to be the HLA. Then that got shelved so now they're trying to find something new.

heh.
that picture looks like a flying 12 passenger cargo van.


After scanning the article I see they are looking more towards an integrated fleet of rotary wing and complimentary systems rather than just light/medium lift. Still the ARES is an interesting concept although it falls short of the broad spectrum of requirements listed in the whitesheet.
edit on 3/5/2015 by Kukri because: (no reason given)

that last bit is contradictory

"JMR TD has been established to address several of the capability gaps that cannot be satisfied by updating the current fleet.

“Let’s figure out what we want this new aircraft to do, and let’s go out and prove that we have the technologies available to meet those requirements.

Surely with the capability of existing platforms there shouldn't be any anyway?

P.S. sorry if that seems a bit daft, but I am a civvy so don't be too hard on me

No, it's "We have gaps that need filling, but let's define a platform and make sure the technology meets the mission".

They don't want to define a platform that ends up not being able to do the mission because the technology isn't there.

What can't they do then???? I'd think that almost any mission requirement could be fulfilled by an already existing platform though.

I'm just a bit confused about the mission itself rather than a new platform.

If you ask me it looks like another way to waste vast amount of money to replace something that works just fine as it is.

Quick response with a large payload, and long loiter. Helicopters are slow, noisy, and vulnerable. The V-22 can get there faster, but can't carry a large payload. And neither can loiter over an area for a long time.

The definition of vulnerable in my book IS long loiter times

If you stay near the enemy for any longer than necessary it makes you vulnerable. You cant make anything that large safe.

20mm cannon rounds will make a mess of anything of extended periods lol. Heck even an AK-47 or an RPK will damage a large platform no matter how well armored it is...If not then it certainly has a chance to hit something vital using the "golden BB" rule.

And you can stay in the area hiding, like the Apache and Kiowa do now. But most large transport helicopters can't stick around if needed.

And helicopters are vulnerable to even small arms. Unlike an aircraft, which generally moves too fast to be hit by a guy with a rifle, a helicopter is low and slow enough, and the most important parts aren't armored.


The industry proposals for FVL include the capability to carry a payload of 12 troops and four crew, hover out of ground effect at an ambient condition of 6,000 feet and 95 degrees Fahrenheit, and self-deploy 2,100 nautical miles at a speed of at least 230 knots.


Went back to the article and see that requirements are more TC/GP. I also see they are wanting to overcome the problems discovered in the 'stan WRT lack of performance at elevation. I assume they are/will be considering a tilt rotor between Blackhawk & Chinook lift capability should they decide to follow through. Seems logical and would certainly fill the present gap in capability. Don't ask me why but I'm picturing a tri-rotor setup 2 outboard and one in the rear. Not sure if that would be practical though.

True, but it does seem like they are spending money on something that breaks new ground but doesn't really do a great deal because of it.

Surely the money could be better spent elsewhere is what I mean. there are planty of platforms out there that could do with a bit of cash thrown at them to extend service life and save a bit of cash at the same time.

With national debts in the billions or trillions I do wonder why some nations spend so much on R&D for new weapon systems yet the average squaddie or grunt still doesn't have equipment and protection that they need and deserve. Like Dragon skin body armor for a start and I'm pretty sure there's a shed load of other stuff out there. After all It's boots on the ground that need the most protection.

I just think sometimes evolution is better than revolution. This is one of those aircraft projects that I see on occasion and I think "Yeah It's kinda like a nice idea, but is it really needed?"

Just my 2 pence worth really. As a casual observer of modern warfare of course and a lover of new tech too.