posted on Mar, 5 2015 @ 01:52 AM
link
So Toyota is giving away free custom names for their car owners. If you own one, and even if you don't (*cough*) you can hit this link and get a custom badge for your car. I'm pretty sure they're not allowing anything profane, but my my little rally girl is getting her name on her glorious ass.

You have to fill out some basic info, upload a picture of "you" with your Toyota, and they will ship you a custom badge. I found out about this from NASIOC. If you lack scruples and don't own a Toyota, you could perhaps find a picture online of someone posing with a Toyota and use that instead of a "selfie".

One guy got URABUS. Read that backwards. 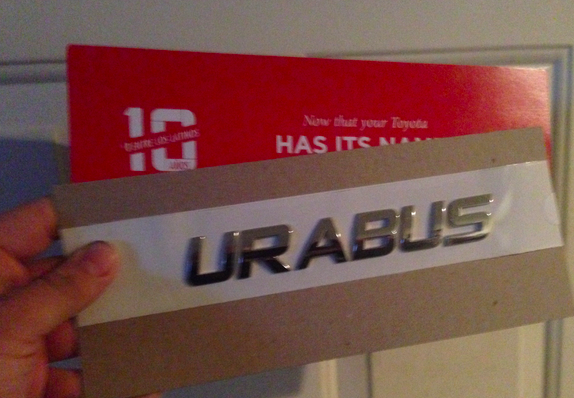 Celebrating its Hispanic Families, the “More Than a Car” program recognizes that Toyota drivers see their cars as members of their families and nothing says you’re family like your own family nickname. Drivers can personalize their vehicles with physical car name badges. The raised, 3D-printed badges gives fans the chance to formalize the love – and place in the family – for their vehicle. The “More Than a Car’ campaign, thanks its loyal customers for welcoming us into their families,” states Jack Hollis, vice president of Toyota Division marketing at Toyota Motor Sales, U.S.A., Inc.

You gotta love the internet for the creative humor and just shoves it right back to the big boys.

Great find and I am at a loss as to what to order for my GMC truck?
Regards, Iwinder

originally posted by: CranialSponge
I want to name my SUV the "Spockinator".


Go for it and post a picture when you receive it:-)
Regards, Iwinder

posted on Mar, 6 2015 @ 10:29 PM
link
If anyone gets these please post a picture! I debadged my car and only left the AWD (in case I get towed) because I like a clean look. Not sure If I'm putting her name on the butt yet.

It actually looks pretty good, but I'm still not sure if I'm putting it on my car. If I do I might take pics but I sort of worry as my car is very identifiable.

I'm with you on the clean look. One of my cars is clean except the hood badge, as it stands, and I plan to do that with my recently acquired (and very first AWD!) Audi. Yeah, I'm a euro girl...

Have to ask -- what'd you name your car?

So it's kind of a stupid name... Her name is Ruby. Partly because of all the red stitching and dashboard, partly because Ruby SOHO came on when I was driving, and partly because it rhymes with Scooby. Car is DGM, not red, but I don't really care. Name just stuck.

I was a little too tipsy to come up with anything better when I filled out the application form and didn't actually expect Toyota to deliver.

I've always liked Audis, nice choice! I love the German cars too, and was initially going to get a Bimmer. Couldn't quite justify paying an additional $15k+ for the one I wanted (I really wanted to get a new car that hadn't been beat on) and it didn't really have enough room for my dog.