Don't know why the trial was not ended today and the jury sent out deliberate. Get the trial over by lunch tomorrow and get the judge to sentence him Friday. done and dusted.

See no point in drawing this BS out now. But Lawyers will do what lawyers do and waste tax money while at it.


If you own lawyers goes up in court and say you done then that should be it.

He is a grown man, what his older brother may or may not have said to him irrelevant and should not mitigate anything.

Yeah I don't get it either, I read the article and still scratching my head.

Yeah I don't get it either, I read the article and still scratching my head.

You don't plead not guilty then go up and say "he did it".

I agree, it would have made more sense if the lawyer made a deal in the beginning a life sentence for a guilty plea. Who knows maybe the lawyers are in cahoots with each other and it was planned so he would get the death penalty?

I agree, it would have made more sense if the lawyer made a deal in the beginning a life sentence for a guilty plea. Who knows maybe the lawyers are in cahoots with each other and it was planned so he would get the death penalty?

I dont know how it works over there but I would think that may be illegal and could result in a mistrial and the little SOB walking.

posted on Mar, 4 2015 @ 03:12 PM
link
Seems fishy to me. After watching the whole thing unfold and then that bloated manhunt, all the inconsistencies led to a trial where the person being tried was found guilty by his lawyer? I think the FBI wants their patsy silenced for good. Not just that wounded throat he incurred after being captured by the police. I'm not saying he didn't plant a bomb, I'd just like to know about the events leading up to it and who convinced the two brothers to do it. Also id like to know more about that dude they (FBI) killed in Florida.

Strange behavior for Attorney Clarke, who's former "clients" which suspiciously include Ted Kaczynski, Jared Loughner, Zacarias Mossaoui, Eric Rudolph, et al; does what she does best and keep "clients" off death row and all evidence out of the courtroom and media. Fishy indeed. Clarke once said a veteran lawyer told her: "The first step to losing a capital case is picking a jury.
edit on 4-3-2015 by wasaka because: (no reason given)

posted on Mar, 4 2015 @ 04:05 PM
link
Let's see. This is a court appointed defense lawyer? Someone clue me in on the strategy of saying that he did it? Was is so that they could focus exclusively on the older brother's influence instead of perhaps muddying the waters?

i think they will say he was brainwashed by his older brother in order to avoid the death penalty. this defense might actually work.
edit on 4-3-2015 by conspiracy nut because: (no reason given)

originally posted by: conspiracy nut
a reply to: aboutface

i think they will say he was brainwashed by his older brother in order to avoid the death penalty. this defense might actually work.

This though could have been done after a guilty verdict.

Not sure how its done over there but I thought mitigation comes after a guilty verdict,

posted on Mar, 4 2015 @ 04:22 PM
link
There has to be some legal/ethical issues with his attorney proclaiming his guilt when he has plead not guilty to the charges. Authorities claim he admitted guilt in the boat by writing a confession in blood, but he goes on to plead not guilty. Seems like everyone but him has proclaimed his guilt.

The fbi needed our help identifying the brothers, only to find out they knew who they were the whole time.

How do you explain the craft intl. mercs at the scene? Why was one of the mercs missing a backpack after the explosion?

These brothers were most likely paid fbi informants who were used as patsies, hence the reason the fbi pretended not to know their identitys.

A 29 year old bloke with an intellectual age of 13, pleaded guilty to shooting 37 people in Australia in 1996. His co-called lawyer was struck off and disbarred from practicing law some years later because he was working for the prosecution while 'representing' his client.

the bloke was frightened of guns and had never had any weapons training in his life. a bloke wrote a book about it and showed why they desperately wanted the patsy to plead guilty which was because there was not one scrap of forensic evidence to show the bloke that pleaded guilty did it. In the end the bloke pleaded guilty so he could have a TV in his cell.

Not sure why this bloke pleaded guilty when if you watch the lady runner in green you will see who set off the bomb and why the ole bloke behind her fell over. Just watch the highest def video you can find.

originally posted by: learnatic
a reply to: crazyewok
Not sure why this bloke pleaded guilty when if you watch the lady runner in green you will see who set off the bomb and why the ole bloke behind her fell over. Just watch the highest def video you can find.


It's bad enough that in trying to think you fail, but what makes it so disgusting is that people like you accuse victims of actually carrying out such an appalling crime.

In the new angle that was just released, you can clearly see she's just tossing a cup - though it was obvious to anyone that actually can think anyway. I can only assume you and people like you have never been to a marathon either to participate or to cheer someone on or you'd see how they toss cups like that all the time! 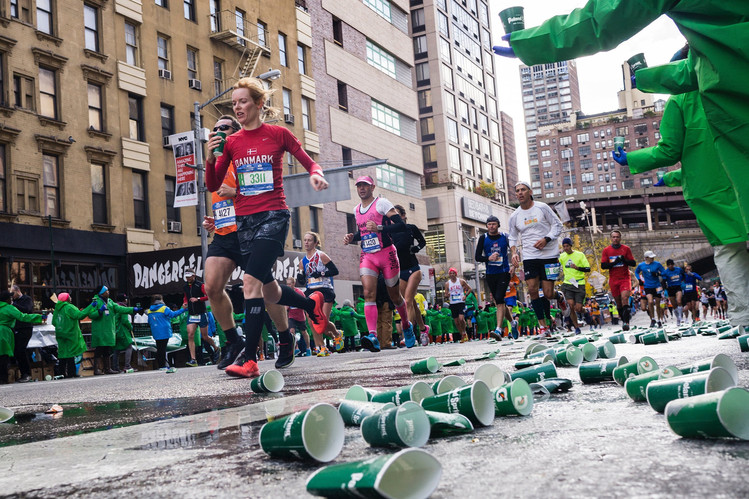 The ridiculous idea that she's playing pass the parcel with a detonator which is the theory you're talking about is so dimwitted it hurts. It doesn't even make sense!
I've seen people arguing that she doesn't react (she was already in the process of tossing the cup and then covers her ears and looks around so that's not even true) and plenty of other people in the scene carry on running, I'm not sure what some people expect?
The guy in front of her even starts to raise his arms to celebrate finishing, these people just finished a marathon are exhausted and already have the next sequence of events playing in their mind.
Do any of you actually have ANY understanding of how the human brain works or thought processes are carried out? I keep seeing evidence that suggests not. What do you expect? Commando rolls across the tarmac?
Why the hell would someone posing as a runner, which is what people like you are suggesting, detonate it anyway? Why would they start playing a convoluted game of pass the parcel?
You're trying to be smart, but all I can say is EPIC FAIL.

First explosion starts around 00:16 - it looks like she does toss a cup from her left hand then covers her ears after the explosion has happened. You can then see the cup in this shot flutter around on the floor, not something a mystical detonator would do!
Second explosion is at about 00:43 onwards.

Oh and that video you people like to push around, but the version where it's so compressed it fuzzes the picture, the one where the guy 'throws the powder' - he's throwing blankets morons which you can see without a shadow of a doubt if you look at a proper video you dishonest, delusional liars!

As for the bombs in general, the damage and how people react, injuries etc I suggest you start calibrating your brains by going to places like LiveLeak and some gore sites and start studying some photos and watching videos. Start with market suicide bombings and such like, then you might actually be able to form opinions that are vaguely accurate and of some worth instead of this BS movie explosion based ideas some of you have.
Search tips (and yeah I know Boston wasn't a sucide bombing but it was the same type of home made explosive) - "mosque suicide bombing", "suicide bombing", "market bombing", etc.
What will you find? IT LOOKS THE SAME AND PEOPLE REACT IN THE SAME WAY.
Don't have the stomach for watching that stuff? Then STFU and stop disrespecting people while pontificating your BS like you actually know what you talk about, thinking you're some sort of smart couch detective.