Something big is coming to ATS

originally posted by: olaru12
a reply to: SkepticOverlord


originally posted by: olaru12
a reply to: SkepticOverlord

posted on Mar, 5 2015 @ 05:21 PM
link
Guinness, finally and proper Irish whiskey in abundance.
Dancing and singing celebrating our diversity, how lovely.
Is there a dress code?
I do want to be properly dressed for this.
It is almost spring, should I wear my reindeer suit or just a "wrap-around"?
Should we invite dignitaries?

Even if we don't like it we should celebrate, any occasion is a good one.

A thread that doesn't actually say anything, are you just trolling for flags?


I would grant all the flags I could just to know what is hapening, and if he is a Troll I would be honered to encounter him, even though I would have to talk to him all night so the first rays of sun light would touch him and turn him into stone.
But a day is so much longer here on planet ATS that it would take a terribly long tale.
Eternity
WIS

I'm already here so I can't possibly imagine what could be better that's coming to ATS. I'll stick around to see though.


I wish I had come up with that in such a nice straight foreward manner. Good Job.
WIS

The truth needs no shroud, does it? 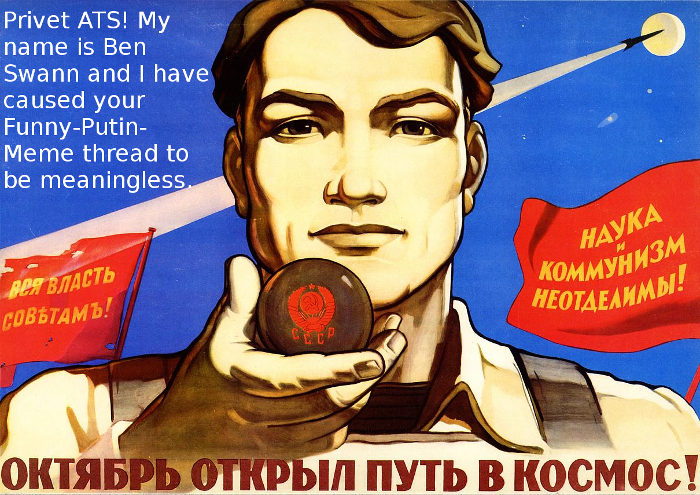 SO? Help me get my head around this:

We have in the very recent past #-canned Russia Today, for very good reasons.

"RT.com has covered news and issues that resonate well with a disenfranchised US millennial audience..."

There has never been a single time in the 5 years I've been hanging around here that I have agreed with you more. I had hoped to articulate my own thoughts concerning just that very thing in a thread regarding RT, Red Ice, Northern Europe and racism here in the U.S.

This is your thread...

Russia Today (RT.com) Is Russia's Propaganda Channel - "Truth is not the mission at RT"

So, just to get this straight: We have a giant thread on ATS where much effort is exerted to clarify Russia Today's place in the world. Swann is a staff anchor at RT.

We invite Swann to ATS.

We've been over gun-nuts in America. Swann holds an assault rifle sweepstakes.

We invite Swann to ATS.

It takes a monumental effort to keep the Sandy Hook "truthers" at bay and purge their insanity from ATS. Swann sees the fire and grabs for a bellows.

We invite him to ATS.

What's goin' on? Did you know this about Swann? I'll leave you with this quote from Benjamin…

“So look, at the end of the day the question that we have to ask ourselves is: is RT speaking to people in a way that media in the United States is not, and without question, the answer is yes.

We have a left, right (hand puppets) paradigm in this country, where media pretends to be at odds with each other over the left wing and the right wing.

But in reality when those two wings start attacking one news entity, in this case RT, then you know that that paradigm is starting to break down”


Don't tell me that Elvis is alive and you found him. That would be great!

If that is to be...then I will stand behind the grassy knoll...to make sure he stays dead!

You ain't nothin' but a hound dog. Don't be cruel. He's at the heartbreak hotel.

That's 14 pages of my life I'll never get back.

I want you guys to know that I believe in you and I don't find it difficult at all to story this in a way for myself that allows me to continue to hold you in the highest regard.

I'll be standing by.