Utah hears of danger of dope-crazed rabbits if marijuana legalised 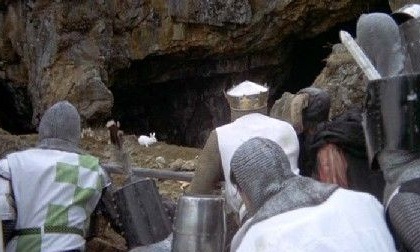 Legalising medical marijuana in Utah could lead to absent-minded rabbits and other animals who don’t feel their natural instincts, a special agent for the DEA has warned the state.

Here it is folks. We can hide our heads in the sand and pretend this isn't going to be an issue, but the cold hard SHOCKING reality is, rabbits could become our worst nightmare!!!!

Imagine if you will, a field of cute little white bunnies, all giggling uncontrollably, craving nachos, and having those damn red eyes. Oh wait, they already have red eyes. Anyway, it's dangerous.

But in case you wonder where the facts are to support such a wild accusation?

I give you this.

Fairbanks did not say why marijuana cash crops would be any more destructive than the corn and wheat crops that grow in Utah and have similarly destructive consequences, also by way of the pesticides, deforestation and erosion that farmers inflict on the environment. Nor did Fairbanks present science from environmental researchers or biologists, despite his assertion that “I come to represent the actual science. I want the science studied and looked at and specifically gone over.”

DEA agents in all their gear, loaded down with guns and flash bangs..
screaming at the top of their lungs...

my god, I wouldn't be able to leave my house. I see rabbits every morning. They might get the munchies and gnaw my head off! The Horror!

originally posted by: retiredTxn
I can see it now...

DEA agents in all their gear, loaded down with guns and flash bangs..
screaming at the top of their lungs...


What, behind the rabbit?

I needed this today. a fantastic reason to smile.

posted on Mar, 4 2015 @ 10:32 AM
link
Here's another good one:
NYPD commissioner blames legal marijuana in Colorado for increase in New York shootings

Hyperbole at its finest. Even if this year’s uptick holds through December (and it’s worth noting that we’re only dealing with eight weeks of data, here), New York would end the year with 383 murders. The city saw 2,245 murders in 1990.

originally posted by: damwel
Seriously that's the best they could argue?

If you read the article, they mention a rabbit that ate some plants, then wouldn't leave the area, even after the plants were gone. What more proof do you need?

It's obvious they misunderstand the real problem. Not enough Pizza joints. given the choice between killing someone, or grabbing another slice of pie, everyone knows which option the one's partaking would chose.

From my experience, I can agree with this.

Tried twice to grow a couple of plants, only to watch the rabbits gobble them down.

Sounds sad, I know, but true.

posted on Mar, 4 2015 @ 10:41 AM
link
Drug crazed rabbits took my BAE-BEE . Fear mongering to those that are afraid of rabbits.
If this doesn't work next will be crazy clowns from the circuses that setup next to the farm.

At least the rabbits would take a break from their "natural instincts" of breeding like bunnies.

Beezzer, if you're reading this, don't be alarmed. Just step away from the pretty plant!

originally posted by: InTheLight
Scarping the bottom of the barrel con arguments, I see.

Hell no, this is their "A" material.

originally posted by: BASSPLYR
a reply to: network dude

But what about space cakes?

Thats it! Marijuana has won the battle!

Its opposition has nothing else to go on except rabbits...

animals are smart, if there is some thing that can be dangerous they will learn to stay away. Look at the solar energy plants... at first birds would fly over them and get fried, but after time they stay clear of the area. The same thing will happen here.

Ps. But the rabbits may enjoy getting stoned. Who knows.

Any comercial grower would take any and all precautions to save their plants. Most grow inside so they will be safe.

Just remembered watching this several years ago.
www.youtube.com...
It could be how things got out of hand on "Walking Dead" TV series.

After these people get infected from a rabbit, they all go to the hospital in --- Georgia.
edit on 4-3-2015 by teamcommander because: (no reason given)

posted on Mar, 4 2015 @ 11:32 AM
link
The real kicker is that the straight people will jump on this crap and spout it like gospel......after all the gubbermint tole them so......
I am getting so tired of all the bulldooey they use on the ignorant to gain control that I think ill just roll another one.....