Ben Carson: Prisons prove being gay is a choice

So bashing gays is just another way of bashing women? I like it, lol

originally posted by: Eunuchorn
a reply to: Stormdancer777

So bashing gays is just another way of bashing women? I like it, lol


I never bash gays, ever, I just find the discussion interesting, and thought provoking.
edit on 013131p://bWednesday2015 by Stormdancer777 because: (no reason given)

I was supporting your quote, not saying you yourself were bashing gays.

A doctor at the level of Dr. Carson really should understand the difference between sexual attraction and a sexual act.

posted on Mar, 4 2015 @ 02:04 PM
link
When Ben Carson came on the scene, I was excited. I thought here is a guy, not a politician, who is concerned about America, and may present a fresh approach. I hope he finds someone who is willing to tell him when to shut up!

Now on to his comments. A select few may enter prison and decide to be gay, either because they were already unclear or battling the question. Or, as some have stated, they are put into a position where they are not given a choice. I don't really call this as being gay, more often than not it is about survival. Yes, some may come to a realization that they really are gay, but most use this as a way to cope and survive.

Inmates are more likely to be "punked out" (raped) in their first 48 hours, than any other time while incarcerated. The stigma of being a "punk" follows them to their unit of assignment, where they continue to be abused. Yes, some inmates are not punked out until later, but most are pegged upon arrival. The cause can be retaliation, punishment from a gang, or any other reason you can possibly imagine.

If you separate these weaker inmates, someone will climb to the top of the food chain, and become the new abuser. This is the way prisons work. The only thing lower on the food chain than punks, are snitches. If you ever go to prison, learn to keep your mouth shut.

Engaging in sex in prison, does not mean someone has chosen to be gay. Power, control, economics, and survival are what drives sex in prison.

originally posted by: Annee
a reply to: Benevolent Heretic
But, don't many believe homosexuality causes harm to others and society? (And to themselves)

Yes. But people believe all sort of crazy things. Belief doesn't make it true. Demonstrate how homosexuality harms anyone.

There are religious who truly believe allowing homosexuality is part of the end times.

They should welcome it, then, right?

That by allowing these "behaviors" is a abomination against God. They throw homosexual "sin" right in there with murderers and rapists.

Clearly, murderers and rapists cause harm. Demonstrate how homosexuality harms anyone. Choosing homosexuality is as benign as choosing chocolate over vanilla.

Just like the ignorance of seizures, which were once believed being possessed by the devil.

One of those crazy beliefs people have. And I say that as someone who has seizures.

So, I'm not sure I accept that basis of argument.

posted on Mar, 4 2015 @ 02:22 PM
link
IMHO I think this just proves the whole spectrum of sexuality. There are more folk between completely heterosexual or homosexual than there are straight and gay folk.

You'd probably find those with an issue with homosexuality are probably mid range on the image below. I've always found that those men on the complete heterosexual range are the ones who have no issue whatsoever with gay people as they are so "comfortable" with their own sexuality.

How many homophobic ministers and politicians in the US have ended up coming out or being found helping their fellow man at truck stops! I could prove this point by listing at least 20 anti gay folk but that's a thread all for itself! 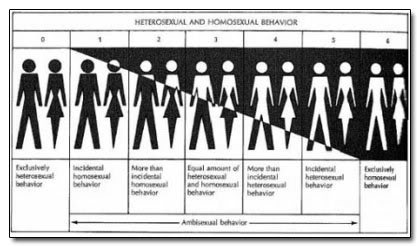 posted on Mar, 4 2015 @ 02:25 PM
link
A: Is anyone else really skeeved out by the whole 'born this way' thing?
i wasn't born a political object, i was born a baby.
and whether the precursor to what i became was in my genes or my upbringing doesn't matter,
i'm a human being and the sincerity of my love should be held in the same regard as that of everyone else.
Especially when you lose the fear and the incessant need to label everything, and realise just how fluid human sexuality is.
My girlfriend was straight until we'd been together for three weeks.
Now she is... very manifestly not.
neither "mode" of sexuality was more valid than the other, nor any of the other variations unknowable to that laughable dichotomy that we enjoyed between states. What should matter is the strength of our love and our partnership, our dedication, the things we do in life and the way we treat each other. so tragic that this manufactured and totally unnecessary debate continues to take lives and destroy families. and for what? you're being distracted. you're being deceived.

I was also born a baby. I have loved people and had sex with people of both genders. More one than the other, but it's been very fluid. When I met the person I would marry, I fell in love with them, not their gender or genitals. I would have loved them regardless of their gender. We've been together for 25 years and are more in love than ever. And that is what it's all about.


so tragic that this manufactured and totally unnecessary debate continues to take lives and destroy families. and for what? you're being distracted. you're being deceived.

The reason this debate continues is because the Conservative Christian Right sees this issue as something more than a choice of life style and they need a rallying point for the faithful.
They see it as SIN and want to use this debate to solidify their political base; just like the abortion issue.

If anything this debate will not only continue but increase in rancor and intensity. It's a political football....to be kicked around and divide the electorate.

originally posted by: olaru12
a reply to: continuousThunder


so tragic that this manufactured and totally unnecessary debate continues to take lives and destroy families. and for what? you're being distracted. you're being deceived.

The reason this debate continues is because the Conservative Christian Right sees this issue as something more than a choice of life style and needs a rallying point for the faithful.
They see it as SIN and want to use this debate to solidify their political base; just like the abortion issue.

If anything this debate will not only continue but increase in rancor and intensity. It's a political football....


IMHO, it's not just the religious right that plays this game but the left as well--politicians in general need their bugaboos to stir up the base. For the religious right it may be gays or abortions, for the left (religious and non-religious) it is evil Christians, or gun owners, or evil corporations, etc.

Politics of division designed to keep us arguing amongst ourselves so that we don't realize the crap that the politicians are doing, usually in cooperation. The most rancorous of politicians always find the ability to cooperate smoothly when padding their own nest eggs.

posted on Mar, 4 2015 @ 03:02 PM
link
He's playing to the only audience that will be voting for him - Conservatives. So this will secure their vote if he runs. It's what they want to hear. I doubt he'll get far anyways. I'm still thinking it'll be Clinton v Bush.

originally posted by: FlyersFan
He's playing to the only audience that will be voting for him - Conservatives. So this will secure their vote if he runs. It's what they want to hear. I doubt he'll get far anyways. I'm still thinking it'll be Clinton v Bush.

originally posted by: tothetenthpower
a reply to: Benevolent Heretic

Isn't this guy going to run for POTUS or something?

I just told my son about this and his response was " oh yeah, cause the American Prison System is the leading source of scientific research regarding homosexuality".


He wanted to. He used to be a little bit more sane but lately he has shifted hard right. I realize some of this is to lock up a primary, but as someone who would have atleast considered him in the past I won't do so now.

So, did something happen while they were in there?

originally posted by: Cuervo
He is actually proving the point that it's not a choice.

My opinion is that there's no such thing as straight or gay. Everyone is bisexual to different degrees. When you eliminate all of one option, by default you're left with just the other and people act on that.


originally posted by: Chrisfishenstein
Being gay is a choice...What's so funny?

That's not what he said, though. He said that homosexual behavior in prison PROVES that it's a choice. That's what's so freaking hilarious about what he said.

What's frightening is when you extrapolate and understand he 'meant' homosexuality can be suppressed. IOW ... "Go be somebody you're not so I feel more comfortable."

originally posted by: Snarl
IOW ... "Go be somebody you're not so I feel more comfortable."

Yeah... I think a lot of people who get on the "choice" bandwagon feel that same way.