- People spitting in public. GAG!
- People biting their nails in front of others. GROSS.
- Stupid and/or insulting TV commercials. (I hate MENTOS commercials)
- Chronically late people. RUDE.
- People who let sneezes and coughs fly in public without covering up with their elbows.
- People who toss cigarette butts and other trash out their car windows.
- Ungrateful nieces and nephews who never say 'thank you' for their b'day card/money.
- People who chew on mouth candies or chomp/snap gum.
- Sloppy slurpers of liquid beverages.
- Sucking straw noises at the bottom of a cup.
- Noisy chewers.
- Drivers who don't use a turn signal.
- Skinny jeans on dudes. The tight bottom part around the legs looks wonky.
- Celebrities who have armed body guards but are against gun ownership
- Celebrities who claim to be green but fly everywhere just for the heck of it.
- People who slam their car door on other cars in parking lots.
- Frivolous law suits.
- Religious misogynists.
- People wearing sandals with socks. Even worse - with black socks.
- when people post 'you know you do' or 'you know it's true'. BAH!
- People ignore your emails or PMs but still claim to be your friend.
- Internet trolls who aren't bright enough to just stay away from the keyboard.
- MSNBC, FOX, CNN, BBC, PressTV, RT, etc etc. 'nuff said.

- Knowing that TV shows like Honey Boo Boo; The Kardashians, Ghost Adventures; and the Bachelor pollute TVs around the world. God help us all!

- Going to a pet store and seeing little dead fish in the fishtanks floating around with the living fish. They are floating there, forgotten and unloved and never adopted. A waste of life. Makes me sad.

- People wearing their pants slung half way down their backends. Pull your pants up guys, you look ridiculous. No one wants to see that. Yes, yes, you can wear what you want and I don't have to look. But this is my 'ugh' list of irritations and so you made the list. Congrats.

- People who invent computer virus'. SUCKY SUCKY PEOPLE! A special place in Hell is waiting for them.

- PDA (public displays of affection). I understand holding hands, but when it gets into sucking face, that's just nasty!

- When you give $20 to a charity, and then they end up spending $50 over the next year sending you fund raising crap in the mail.

- People who sit right in front of you in church or a movie theatre when there are plenty of other open places they could sit.

- People who are sick with a cold but go out and infect others when they don't have to be out. If you are sick then STAY HOME. Don't go to the movies or church, etc. It's not necessary.

- ETA - forgot one - kids with really really runny noses, and parents that don't wipe it up.

- GOD. I mean, comeon God. What the heck?? Have you taken a look around the planet lately?

Well that was fun. Just saying it out loud makes a person feel better.
I should probably go and make a happy 'YAHOO!! list to balance this one.
edit on 3/4/2015 by FlyersFan because: (no reason given)

posted on Mar, 4 2015 @ 08:13 AM
link
My wife truly wonders why I dislike being around people, so I'll show her this. Most are so self absorbed and have that "Me First" attitude, I'd rather not have to deal with them.

Here's one to add. Instant Expert. No matter what it may be, they've been there, done that and think they know it all.

Add to all that people with long lists of things that annoy them and I'm on board!

One of the most valuable and profound lessons I have learned in my 12 step meetings is.....

Interesting, because I'm up tight about people too, except I tend to find people annoying for a lack of character, morality, ethics, or mindfulness. I can get past some of the gross taboo things so to speak, because I've learned that even I, the one most critical of self, have picked up some mildly annoying habits myself, but mostly due to health reasons or circumstance.

Living with another imperfect person like myself, I've had to learn to get past some of the superficial annoyances. A lack of being considerate for others feelings etcetera when they are doing their best under the pressures of life *really* irks me bad.

Not leaving someone alone when they're stressed out
Not turning off light and sound so people in the same room can sleep (b/c they have to get up early and/or do things)
Not being mindful of someone's past when speaking (that they've informed you at length about)
A lack of respect for persons who otherwise aren't asking for it but are imperfect and in process
etc.


Oh sure. I know. We all have to tolerate each other and put up with the quirks others have. (and I"m sure people are 'tolerating' my quirks as well). This is a very overcrowded planet. But we have to admit that the things others do can be irritating. This is my irritation list.

The one about sick people going out and making others get sick as well - that goes past irritation. It effects my health. I admit that totally pisses me off.

The rest are things that have to be tolerated because we have to put up with each other.

If it makes you feel better, it's going to be 75 degrees here and I am going to play golf this afternoon.

I know it makes me feel better.

originally posted by: r0xor
I've had to learn to get past some of the superficial annoyances.


That's what they are - superficial annoyances. You said it perfectly.
I'm just admitting that they can annoy me.
There is A LOT of having to tolerate what others do.
I'm sure they have to tolerate things I do as well.
It's my 'UGH!' list. We all have things others do that make us go 'UGH!'


Actually I"m in a pretty good mood. Not cranky at all.
I just felt like making my 'UGH!' list. I don't know why.
Maybe because I"m a bit bored today.
But all things considered ... bored is good.

Sorry to belabor the point....

" Resentments are like stray cats: if you don’t feed them, they’ll go away."

originally posted by: olaru12
" Resentments are like stray cats: if you don’t feed them, they’ll go away."

But don't worry. No resentments here.
Just an honest list of what is irksome when it happens. 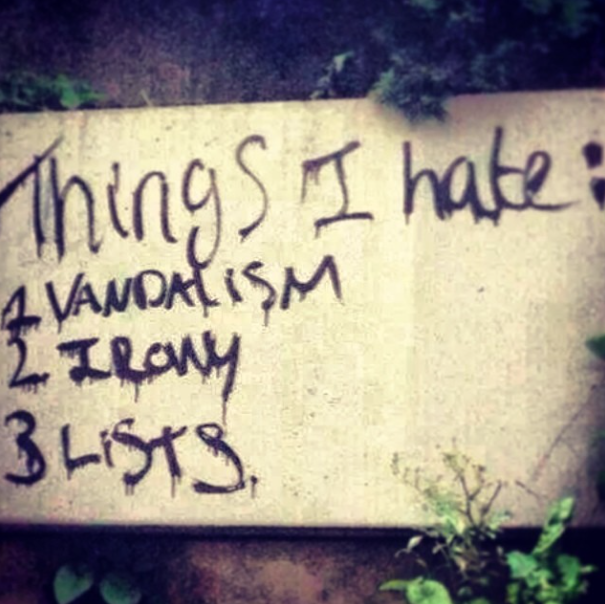 posted on Mar, 4 2015 @ 08:57 AM
link
I think badly of the people that have wolfed their burger then take yours as you sit down and toss you the money. Grrr

posted on Mar, 4 2015 @ 09:02 AM
link
A lot of little annoying things are only annoying. Nothing so dangerously annoying as people that can't drive, park, change lanes, turn, stop or go. If you live in a megalopolis and drive everyday you know how slipshod some people are.

At least I feel better knowing I am part of a vast majority, I have many others in my group. Thanks for the boost in confidence. I will not feel guilty if I do any of these things in the future anymore.

I've gotta admit I'm guilty of one of those 'quirks', I often sample my cooking while hunched over the oven, and I eat straight outta the saucepan to save washing up.

Apart from that I feel the same way about most your points. But I would like to add...

-Those dirty rotten 'songwriters' who blatantly and unabashedly steal samples from previous songs and edit them just enough so that they don't have to pay royalties.

-Those breakfast morning show 'experts' who are just some gossip columnists who blow more hot air than a heater.

-The Papparazi. Anyone who exploits peoples privacy as a profession is a creep IMO, and when the shoes on the other foot they cower.

-any shock jock, columnist or media personality that rants and raves on their business partners behalf but then cries foul the moment they are called out on it.

No seriously I agreed with every single one of those...

So much so it's hard to add to the list.

One you reminded me of, is people who sit next you on the bus/train when there are plenty of empty seats available...

- People who walk their dogs without a lead.

- Golf. (Looking At You Obama)

- Partisan talking heads hired to enrage the other side with s# they probably don't believe themselves. (Looking At You O'Reilly)

- Magazine Covers/Modelling/Music Videos destroying the morale and self esteem of females. (You're all beautiful)

- People who don't S&F great threads like this one.

- Having to copy my text every few lines incase my phone crashes.

- People who think Kanye West is a god.

- People who think Beyoncé is a goddess.

- Comedians who are not funny.

- Racist football chants at my own teams home ground.

- People who have been proven wrong in one thread... & then continue their falsehoods in another.

- Repetition. (See above for example)

- Public displays of affection needs repeating (not an example of the above)... Sod off and get a room.

I may return with more.

- People who park their grocery cart right in the middle of the aisle while they are looking at stuff. Then when I say "excuse me", they look all surprised that they are in the way. Seriously? Pull your cart to the side if you are going to stop for a while. Ugh!

- People who stop at a 2 or 4-way stop sign CLEARLY before you got to your stop sign, but they wait for you to go. You wave them on because it's CLEARLY their turn, then they they look all irritated and wave you on. PAY ATTENTION!

- People who leave their pets in their car with the windows up or rolled down only 1/4 of an inch, on warm days. I have almost broken car windows several times. Many times I have waited by the car for the person to get back, then I say something to them about what irresponsible pet owners they are. This doesn't make me very popular, and will probably put me on someone's ugh list. One of these days, someone is going to shoot me (I live in Texas, 'nuff said).

People who suck their teeth at me.

I've literally smacked both sons and my daughter for it. It's the most ignorant sound I've ever heard come out of somebody's mouth.

People who let their kids run wild in a store or restaurant. And people who completely ignore their kid while he's having a meltdown and screaming bloody murder in a store or restaurant. Keep your kid under control, and if they totally lose control, remove them from the premises. My child had an uncontrollable meltdown one time in a grocery store. I just left my cart at the store (not in the middle of the aisle of course) and took her home. I was NOT going to make everyone listen to her scream for half an hour while I continued shopping.