Throughout history enemies have become allies and enemies again. At this point I am all for Iran helping to kick they animals' asses.

I never said that part was bad, but I also see how they are using it to their own advantage. It gives them the excuse to take the territory in a way that isn't outright invasion on their part. Iran is many things, but dumb isn't one of them.

posted on Mar, 3 2015 @ 06:02 PM
link
It really makes sense for Iran to keep stringing the clueless Obama/Kerry negotiations along as long as possible.
75% of Iran's centrifuges were built during the Obama administration, Clinton/Kerry State Dept.


Fox News reports that the International Atomic Energy Agency (IAEA) , the Arms Control Association, the Center for Strategic and International Studies, and the Federation of American Scientists all agree that most of the centrifuges built by Iran occurred during the Obama Administration.

In late 2007 Iran had roughly 3,000 centrifuges. Reasonable assumptions would place the number of centrifuges Iran could build in the waning era of Bush’s presidency at slightly less than double that number, placing the total at about 5,000.

That means of the 19,000 centrifuges Iran possesses, almost 75% of them were installed during the Barack Obama era. Experts say that 10,000 of them are already enriching uranium to low levels.

edit on CSTTuepm2661 by TDawg61 because: (no reason given)

If you can only think of one, you aren't trying hard enough.

People seem to forget that if Iran was as desperate for a Nuke right now as is made out...

They would just buy one from their Allies like Russia or North Korea...


They are talking about halting "all nuclear activity for ten years"...

That includes all nuclear energy work...


But being a slave to gas, electric & oil companies for 10 years is all fine and dandy...
Unless you're an Iranian being dictated to...

It wouldn't happen...
You/Obama/Next Pres/Congress/Any American wouldn't agree to that.

You do know that Iran is fighting Isis too?

To save their own iranian butts,yes how noble (sarcasm)

posted on Mar, 3 2015 @ 06:11 PM
link
Iran should just build them anyway. Screw what the US and especially Israel has to say. The ME needs balance and Israel is not bringing it.

Best BS argument I have heard from Israel's internet minions... "Israel doesn't need to declare their nukes, everyone knows they have have them, so what is the point?"


Well, but you see, he's giving them everything that they want and taking nothing in return (weakling!) except the demand to halt all nuclear activity for at least 10 years (Imperial Ultimatum from His Imperialness!!!).

So simple a child could understand the double speak... You must have both because he is a weak weak weak President with VAST IMPERIAL POWERS OVER ALL!!! BOTH fears must be spoken to in the same article, and perhaps in the same sentence. / sarc


I'm being harsh, I know. I think its from the headache I have after pounding my forehead against the wall... 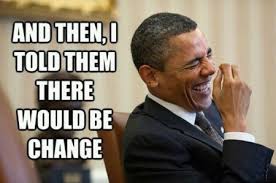 It would be more likely they would try to go through black market channels, but those are likely tightly watched assuming nukes are even readily available on them and Pakistan would currently be the best place for that I think and they are a Sunni nation, not Shia.

So, Iran collaborated with the Norks on the early stages of their respective bomb projects and now it's just a matter of how long takes them to develop their own warhead. Really, they're doing it the best way. If you develop and earn the tech for yourself, you own it as opposed to just buying a bomb without acquiring the technical expertise and means to make more.

Well thanks a lot Obama...

Anything "Obama" never gets old.

He digs his holes with new shovels every time.

originally posted by: MALBOSIA
Iran should just build them anyway. Screw what the US and especially Israel has to say. The ME needs balance and Israel is not bringing it.

Best BS argument I have heard from Israel's internet minions... "Israel doesn't need to declare their nukes, everyone knows they have have them, so what is the point?"


What do you think Iran is doing? Actually waiting for permission to build their bomb? What are those centrifuges spinning down then? Lean, finely-textured beef?

originally posted by: Metallicus
Obama is a terrible President, but he is right to try and broker a peaceful nuclear weapons deal with Iran. I don't think force is the correct response to Iran's nuclear program. The US can't afford another war and the world can't afford for ANY nuclear weapons to be used.

Whom do you trust, Obama to not give away the farm (not telling any details of the negotiation) or Iran to keep to the ? contract by staying within/not stepping over the farms boundries?
edit on 3-3-2015 by vethumanbeing because: (no reason given)


As is taking Netanyahu on his word about the dangers we face if we don't listen to what he has discovered in his Crystal Ball...

Or was it a Tarot Reading...

He may have interpreted it from Nostradamus somewhere...

He certainly didn't get it from his own countries Intelligence Service, who for all intents and purposes, are probably the most knowledgable Intel that Earth has ever seen.

First of all I don't understand why anyone thinks Iran are being unreasonable in not agreeing to this deal.

It says ALL nuclear activity - why on earth should any nation be denied the right to develop a nuclear power programme?
In fact the USA and its nuclear allies should actively encourage Iran to do so and should try to advise on the safest way to do so then they could at least ensure that any nuclear plants met at least the same safety standards as theirs.

Well Iran currently has troops and "advisors" in Syria and Iraq.

And I think Iranian troops are active in the recent attempt to take the Iraqi city of Tikrit Iraq.

On the one hand we have people stating that IS is a regional problem and that Muslim nations should take a greater role in defeating them yet here we may have such a thing and the said country is being criticised and demonised for it.

As for what happens next?
As Charlie quite rightly stated - carry on with negotiations.....its called international diplomacy and its a damned sight better than bombing the crap out of people.

Well if congress had let him wipe Libya and Syria completely off the map you'd be up to 180 by now...

Well I know taking Obama at HIS word about anything is a mistake. So if he says that Iran will get the bomb in 10 years under his deal, it won't happen like that. It most likely means Iran is getting whatever it is they want.