posted on Mar, 3 2015 @ 01:31 AM
link
I saw the guy walking up the street today, I noticed he has some pamphlets so guess no further what he is doing. I crept inside because I didn't want him to see me, so he noticed my neighbors door was open and decided to knock. My neighbor is 78 on his 3rd pacemaker, he is an engineer, ex race car driver and not interested but too nice to say no. My neighbor drags himself into the yard so not to let the guy in and I ,thought it was kinda funny at first until the guy started being creepy, creepier than usual witnesses. This witness guy in his 60s was so intent on bringing him into the Kingdom hall, it was like he was selling something and his mortgage depended on it, it was that bad. The witness was saying things like " its just a guide to your bible, what bible do You read " and " this is the real way to salvation". What bothered me was the severe intent this guy had in his eyes, it was so weird to me. So after about 10 minutes of being nice my neighbor looked at me with that help look on his face. I went over and didn't even acknowledge the witness, just looked at my neighbor and said "are you ready to go" , the witness was scared of me because I know how to throw off an eat s**t vibe pretty well so he split pretty quick, my neighbor thanked me. Neighbor said that the guy has been over a few times before and tells him the same things over and over. I told him do what I do and go to the door naked. The last visit I got was from 2 young girls wearing Belk name tags except it said Julie for Christ and Cindy for Christ, I didn't get naked for them because they were minors and I was joking about that anyway but I scolded them and told them their parents were irresponsible for encouraging two young girls to walk around alone in my neighborhood much less knocking on doors, then told them there is a fascinating video about Jesus on Youtube called Zeitgeist and they should recommend it to their friends and family. I don't understand why people need to infringe on others and impose their thoughts on others or however that should be said. They are mentally distorted. 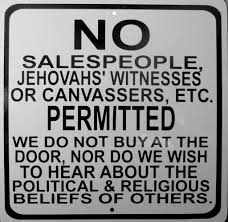 I've never had to deal with these people, but if I did I'm sure I could think of some pretty clever things to say while they waste their time with the "good book"

posted on Mar, 3 2015 @ 01:45 AM
link
when they come to my door i tell them exactly what i believe in. Shapeshifting aliens made of black matter.

Sometimes they inquire me further. That's why i begin to explain my personal religion to them, and try to sell them on my points.

It gets interesting because they get creeped out and can't figure out anything else to say. So i just keep talking until they say Well thanks for talking to us and coming to the door. We gotta go now bye.

Mormans came to my door and i did the same thing, Only they were mystified. They gave me the book of morman and asked me to read it and tell them what i thought about it. Free book for have some lols? Why not.

So i took it cuz it was free. I had to use one of those pages tho to roll a smoke when i ran out of zigs. So i'm very happy i took it.

posted on Mar, 3 2015 @ 01:49 AM
link
I donno if you would go to the door and start ranting about aliens. But for me and my personal perpective of witnessesing the witness witness my own wittyness and to be participating in it as fantanstic.

And i get to expand upon my alien experiences with some religious noobs.

I am basically a shark for these types of people. Or a big bad wolf. Since my religion has black wolflike aliens associated with it, it's taken in literal context.

I am the Wolf in Sheeps skin.

Just an FYI, as some one who knocked doors for some time, those are huge "Please knock on my door signs".
It is engraved in the training of all door knockers.
They see it as a challenge.

I know it is going against your wishes, but many people that have those signs, get sold. I am sure you are not one of them, just speaking from experience.

Also, people will knock on those doors just for the good amount of no's you hear.
Kinda like taking that first good hit to get ya going in sports.
If you don't want to talk to the person, don't open the door.

posted on Mar, 3 2015 @ 02:01 AM
link
My brother has a gas mask that he wears sometimes to play with the dogs. It gets them wound up and freaks the smaller one out. Well, one day he was playing with the dogs and a witness knocks on the door. My brother answered it, still wearing the gas mask. The dogs are in the other room barking their heads off and here's my brother with that gas mask on saying, "What? What?" because he couldn't hear. The witness was scared and ended up taking off. I'm surprised he didn't call the cops.
I had them and mormons coming around to bother me. I put on the "satan loves you" routine and they left. It works every time. I can be scary looking if I want to be.

Just tell them you don't want to talk and if they continue going toward you going on and on about the Bible warn them that behavior is called harassment and is illegal.

Tell them you have your own beliefs and don't want to be bothered just like you don't bother them with your beliefs. "Treat others like you want to be treated".

good to know. How would you had treated a "No Trespassing" sign?

But I knew plenty of guys/girls that literally the only thing keep them from the door was a barrier.
When you work 100% commission, gotta take the buck shot approach.

I should say that the sign you posted will keep away the new people and the timid, which to be honest is a good portion, the turn around rate in a job like that is high. Just the ones that don't mind, make it an effort to knock those doors cause they know not everyone will and those people have been bothered less.

posted on Mar, 3 2015 @ 02:46 AM
link
i hate them with a passion. i mean really hate them. i've stopped them from going to 4 of my neighbours (with my neighbours permission and grateful thanks) regularly.

...in fact I'm pretty sure that keeping people out is one main reason doors exist in the first place. Anyway, there's no need to be a jerk about it. You wouldn't invite the Census Bureau inside your house for a sacrifice to scare them away, would you?

It sounds like some of you are playing Cards Against Humanity: Missionary Edition. "How can I mock and embarrass and scare these people the most?"

Just asking because you sound a little angry, is there anything you would like to share with the group?

I'm sure you can guess the response.

They claimed that Jesus would return before the 1914 generation were all dead.

Obviously that belief was more persuasive then than it is now.
edit on 3.3.2015 by CJCrawley because: missed a word out

posted on Mar, 3 2015 @ 03:48 AM
link
these guys used to piss me off, but then i thought hey well at least they arnt excecuting people that are non believers in their version of events

posted on Mar, 3 2015 @ 04:06 AM
link
They come around once in a while. But seem very passive to me. Peaceful, friendly. But yes pushing their beliefs. I ask them stupid questions they cannot answer about their beliefs. They hand me a paper and leave.