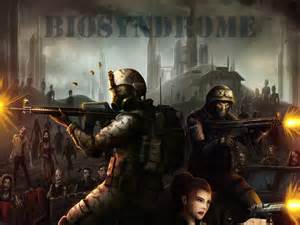 I'd like to thank SkepticOverlord for giving me the go ahead to write this thread.

Hello, ATS. I'd like to tell you about a game that I found. It's called Biosyndrome and was created by Paul Murphy and Joel Logan. It is a zombie apocalypse game. My friends and I played it and it was a lot of fun.
It's a D8 system, which means that attack and defense rolls are made using an 8 sided die, or multiple dice depending on your weapon's rate of fire. For example, if I was to attack with a semi-automatic pistol, I would use two dice because it has a rate of fire of 2. The die rolls also determine how your shots land (if you're not using melee weapons). An 8 is a head shot, for example.
You can play as different classes, each with their own strengths, weaknesses, and traits that can affect game play. The classes available are: Civilian, Doctor, Mechanic, Pilot, Police, Scientist, Soldier, and Technician. Each comes with its own type of equipment. Alternatively, you can also play as Coalition forces members or a member of the Company (which is kind of like the CIA).
There are different types of zombies that you can go up against. They include: Walkers, Runners, Brutes, Torsos, Infected dogs, Armored dead, and Zombie Masters. Each has it's own traits that can make it a challenge. For example, Armored dead wear body armor (they were coalition forces that have been killed and turned).
If fighting the undead isn't challenge enough, you can even go up against members of the animal kingdom. The creators included this option because animals would have broken out of zoos and begun to roam the streets.
You can search vehicles, buildings, corpses, and really anything. Food and water are necessary, if you want to survive. Also, weapons and ammo are things that can be found. You can even drive vehicles. Each has its own amount of hit points and movement speed. Among the list of vehicles you can drive is an M1 Abrams Tank.

The story:
A global pandemic of the B10 virus ( which acted like the flu at first) caused many deaths. For the first few weeks those that died stayed dead. Then the virus mutated, causing the dead to reanimate. Hospitals were already overwhelmed by so many dead, now things got so much out of hand that the world's governments thought that the only way to contain the pandemic was by dropping nukes. So, not only do you have zombies, in some cases you have irradiated zombies and in some cases mutated zombies or animals.

Right now all that's available is a RPG version of the game but they're working on a war gaming version at the moment. Both versions are free. You can get the Rpg version for free here.

You get the core rules, character sheets, Combat quick reference guide, Quick start characters, and weapon cards that can be printed out onto card stock. All for free.

So, if you like to play RPGs and are bored, pop on over and download a copy of the game. You won't be sorry.

I found a couple of videos on youtube that shows game play. I haven't found any of people playing the RPG version but have found some of the war game version being played. I can't wait until that version comes out because it looks like it would be fun.

Here's a battle report featuring survivors vs a zombie horde.

This one is Coalition forces vs a zombie horde.

posted on Mar, 2 2015 @ 10:35 PM
link
On the last game that we played we were in a hospital that was surrounded by walkers. My friend had the crazy idea of rigging an ambulance up with oxygen tanks in order to make it into a rolling bomb. The effect was spectacular, to say the least. We opened the garage door and he jammed the gas peddle down with something. Off it zoomed, followed by most of the walkers. The ambulance ended up running into something and the whole works exploded, taking several walkers with it. It was a close call. If the ambulance hadn't gone quite as far as it did we could have been engulfed in flames as well.

I remember you mentioned this title in my TTRPG thread. I never got around to creating an account on drive thru rpg. My brother and I have been using D20 Modern for a zombie campaign but that system is utterly hopeless. I gave All Flesh Must Be Eaten a look through but didn't much care for what I was reading. I need to take advantage of this and download this book. D8 system sounds fun and like a nice break from the norm. I certainly would need to stock up on D8's though, about how many does a player need to get by?

I think the most you'll need is 4 or 6. Then again you could just roll the one die for however many times and keep track of what you get. Somebody told me about another zombie apocalypse game but I have no idea what it was called or how much it was.
What didn't you like about All Flesh Must Be Eaten? Was it the game mechanics or were some of the rules just dumb?
Was the D20 system you and your brother using part of a game you made up? Why was it hopeless?

It is pretty fun. I can't wait until they get the war game one done. We're going to have two people playing survivors or coalition forces and the other two playing zombies.

posted on Mar, 3 2015 @ 01:00 AM
link
This looks like fun, I have been thinking about buying Zombicide from cool mini but I haven't forked out for it yet. I'm still playing a large campaign based on Muskets and Tomahawks at the moment. No zombies though, but Conquest do cast some nice zombie indians. hmmm

That's the name of that game, Zombicide. Thanks. I think I saw that on Will Wheaton's youtube show called Tabletop. It looks like it would be fun.

posted on Mar, 4 2015 @ 07:40 PM
link
I just bought the Millersburg adventure for the game. I'm blown away! The maps are well detailed and beautiful. The scenario is well thought out. It even included extra buildings and areas than what was advertised for added encounters and scavenging opportunities. To make things even better, I got a discount because today is Gm (game master) day. I had no idea that it was and was surprised by the discount. I am very satisfied. I can't wait to play!