posted on Mar, 2 2015 @ 12:39 AM
link
Mr. Sweetman has posted another article on Av Week that discusses a four-member Long-Range Strike (LRS) Family of Systems (FoS):

Opinion: Looking for Answers to the Navy’s UCLASS Mystery

Three family members are real today: LRSB, the Long-Range Standoff cruise missile and a “penetrating intelligence, surveillance and reconnaissance” (P-ISR) vehicle, which is Northrop Grumman’s secret RQ-180. (A fourth, Conventional Prompt Global Strike, was dropped like a bad habit as soon as the Pentagon’s exit door closed behind its leading advocate, and was replaced by the Minuteman follow-on.)

That leaves one: Penetrating Airborne Electronic Attack (P-AEA). In the LRS-FoS plan, RQ-180 would find targets for LRSB and the P-AEA would suppress defenses. Together, they fill the capabilities gap between the cost-constrained LRSB and the Battlestar-Galactica Next-Generation Bomber (NGB) that Gates canceled in 2009.


What struck me as most interesting was the discussion on P-AEA, along with some educated speculation. Mr. Sweetman has included a P-AEA mention, albeit vaguely, in previous work as well:

There has been speculation as to what the mysterious platforms captured in images over Amarillo and Wichita last spring were, most of which appear to link back to the LRS FoS. Some comments have placed the Amarillo sighting with a Boeing platform that has a similar planform to the Phantom Ray. Other speculation says that the Wichita sighting is an electronic jamming/attack platform.

If the P-AEA exists, which of the two sightings last spring may it be linked to, and why? What else do we know?
edit on 2-3-2015 by TAGBOARD because: (no reason given)

I have another explanation for the Wichita bird, one that meshes well with Zaph's description of it as a platform that almost certainly isn't going to see the light of day any time soon.

Take a look at the plane in the bottom left of the (grainy) blueprints, it fits almost perfectly with renderings people here have made of the Wichita bird's plan form.

And if the stealth Senior Citizen concept ever saw the light of day, a tactical transport explicitly designed to violate other nation's airspace and drop off special forces teams, CIA, and what have you, then isn't that the living definition of something that's not getting declassified any time soon?

I posted in that thread about that aircraft last night after getting a clear look at the shape of the airframe and that is pretty spot on to what I was attempting to describe. Man I would like to hold that piece of paper for about 10 minutes, my eyes hurt from squinting. Hey thanks for posting that, looks like that site will be a blast to surf through.


Edit: Actually the aircraft in the Wichita pic appears to have longer wings and has them sweeping back further than the fuselage extension in the rear.
edit on 2-3-2015 by StratosFear because: (no reason given)


edit on 2-3-2015 by StratosFear because: Nevermind, I stand corrected 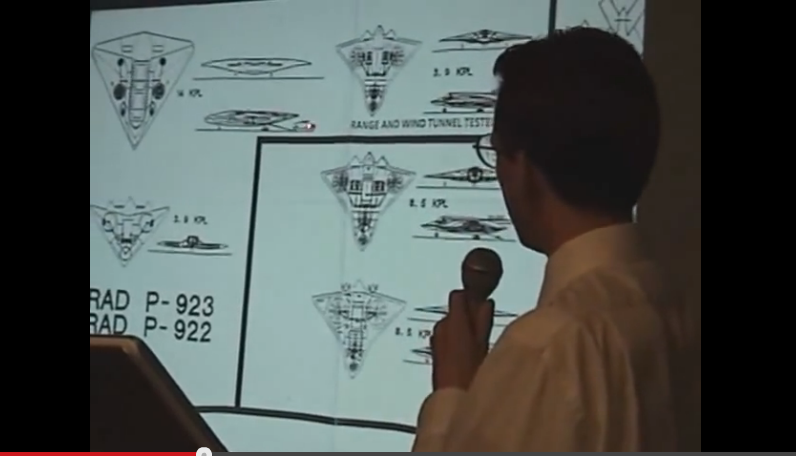 Boomer seemed to think the source info (Scaled Composites circa 1991) was BS...but he didnt get back with any additional leads (nudge nudge).

As part of Schratts description of the SOFTA on YT he said the doc (pictured) states the craft was "range and wind tunnel tested" and " is designed to accommodate 24-36 passengers ( or equivalent payload) but no way to verify without seeing the docs.
edit on 2-3-2015 by Jukiodone because: (no reason given)

any chances of finding the pics at the base or the video?


SENIOR CITIZEN is said to be in operational use since 1989, and almost always in conjunction with F-117A attack planes, flying behind them only minutes away. In August 1990, the type was seen in England, on the Alconbury RAF base. Twelve separate witnesses testify to its taking part in the Gulf War, one of them being parachuted from a SENIOR CITIZEN on the way to Baghdad. Renowned aviation journalist (and ufologist) Steve Douglass allegedly filmed the type on an exercise flight in Roswell. An RAF source also confirmed its presence on Machrihanish RAF base in Scotland. SENIOR CITIZEN aircraft are now said to be based at Camp Mackall in North Carolina. Their numbers are unknown. Many UFO buffs and secret plane enthusiasts have tried to associate the ASALT with the wave of black triangles that were seen over Belgium in the late 1980s. However, what is currently known of the type does not allow for the extremely high speed manoeuver capabilities that were observed by Belgian Air Force pilots.

SENIOR CITIZEN was supposed to be a stealthy STOL transport. There were once upon a time some interesting pictures taken in the UK of the escort in question though.

The government paid an obscene (think instant millionaire) amount of money for all of the pictures and negatives. They're either safely locked away or destroyed by now.

Somehow I doubt they're at Camp Mackall. Besides being an Army Airfield, their longest runway is under 5,000 feet.
edit on 3/2/2015 by Zaphod58 because: (no reason given)

yeah i was looking at the base.

there's 0 infrastructure to support anything of that nature.

I wonder if those pics are somewhere online still though.

Jesus no. They never made it there to begin with. He had them for about 10 minutes.

heh I'm sure they made him an offer.

If the amount per negative I was told is anywhere near accurate, I'd sell family members.

hrmm... we are pushing some 25 years now on that bird.

how much longer you think it will stay hidden?

And where would they keep it?

I don't think she'll ever come to light. There are a few places they could keep get hidden.


Somehow I doubt they're at Camp Mackall. Besides being an Army Airfield, their longest runway is under 5,000 feet.


But if it were a STOL transport it wouldn't need a big runway. Besides what better place to hide an air force black operations aircraft than at a seemingly unrelated army airfield with outwardly little infrastructure? Unless of course you are hinting it isn't there?

If it's a STOL transport it wasn't escorting F-117s anywhere. It can't be both an escort to lase targets and do EW like people speculate, and a transport capable of carrying almost 40 people.

Modular system with an interchangable inner section that can be switched between comprehensive EW housing or personnel/cargo transport module depending upon mission profile?

Would score massive brownie points with procurers as a multi purpose platform .....but that in itself might be a reason to suspect it doesnt exist as it would be far too economically sensible for the Politics/Money/Defence triangular trade shenanigans evident today.
edit on 3-3-2015 by Jukiodone because: (no reason given)

The escort craft in question is NOT going to carry passengers. While that idea makes sense, the planform doesn't allow for it.

That's good enough for me.