Where is the Most Cool and Beautiful Place in the World.

posted on Mar, 1 2015 @ 11:35 AM
link
Being from the southeast my travel has been limited to : The U.S. , Caribbean , Central and South America and Hawaii , although those places are beautiful, especially in the 4 corners region and Costa Rica, Im looking for something different. I am interested in somewhere relatively safe and WARM that has striking beauty, strange animals, good food, crystal clear water and reef I like to free dive, mountains, Colorado vibe if ya know what Im saying, waterfalls, all that. Im looking at Pelau or Micronesia. Any places You've ever been that were what Im looking for ? Where would You consider the coolest place in the world to be, even if its cold ?

I spent about 15 days on Mahe, Seychelles back in 1991, and after living on all inhabitable continents, the Seychelles archipelago is by far one of the most amazing places on earth. About 4 degrees south of the equator smack dab in the middle of the Indian Ocean:
www.google.com...,+Seychelles&rlz=1C1ASUT_enUS522US522&es_sm=93&tbm=isch&tbo=u&source=univ&sa=X&ei=c0_zVJetJ8LksASf6IF4&ved=0CCYQsA Q&biw=1366&bih=643


But seriously, is it not the most cool and beautiful place on the planet? 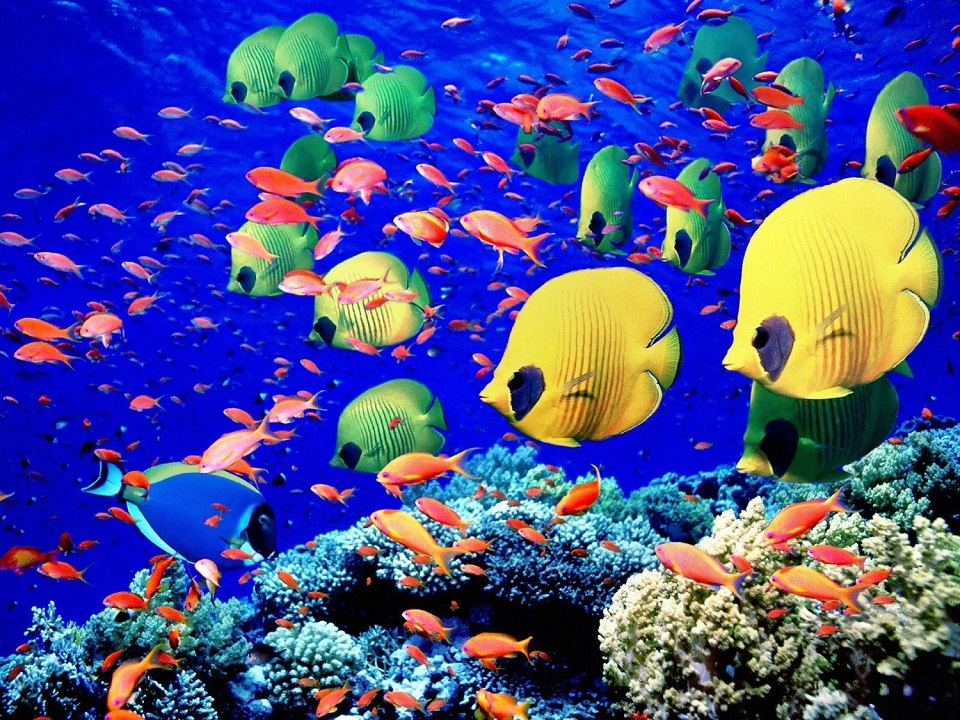 originally posted by: Foderalover
Where would You consider the coolest place in the world to be, even if its cold ?

I see you Snubbed Costa Rica, but its got my vote for the coolest place..Half the country is protected land. It's got everything you ask for in the OP and much more..minus the Colorado feel of course.

South Pacific, Tahiti for warm exotic. Canadian Rockies in the early spring/summer before the "no see 'ems" come, around Edmonton for nature's awe. Upstate New York for the fall foliage. Anywhere there is big sky and mountains is where my heart and mind feel truely free.

EDIT: Actually, I changed my mind. The mountains of NC.
edit on 1-3-2015 by Aldakoopa because: (no reason given)

posted on Mar, 1 2015 @ 01:49 PM
link
I have a top 5 with no particular number 1.
Maybe Plitvice in Croatia. the worlds first conserved National Park before a country even existed 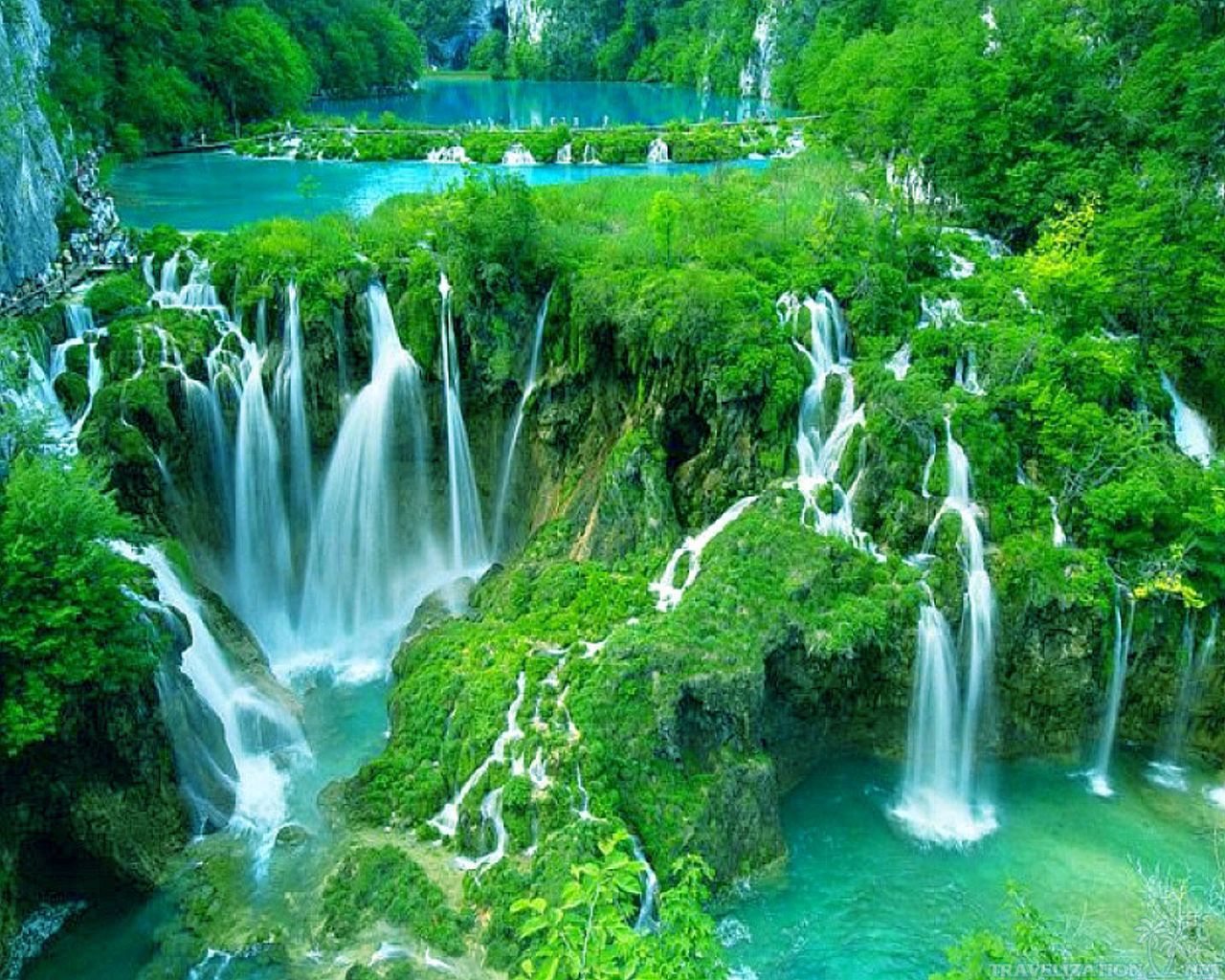 originally posted by: zazzafrazz
I have a top 5 with no particular number 1.
Maybe Plitvice in Croatia. the worlds first conserved National Park before a country even existed

I've been there, you will stand in awe! I was, even as a bush/mountain man

posted on Mar, 1 2015 @ 03:04 PM
link
Mystic Beach, Vancouver Island. My favourite place in the world. It has a drinkable stream dropping of a cliff that flows into the ocean. Nobody to bug you. Warm most summers. Great for diving (underwater not cliff, that I know of), surfing. Great food about half an hour away.

originally posted by: Foderalover
Where would You consider the coolest place in the world to be, even if its cold ?

OK now that is just bad ass, really, that is definitely one of the coolest things Ive ever seen, that's what Im talkin about.

posted on Mar, 1 2015 @ 06:55 PM
link
One place I'd love to visit, is Huacachina, Peru. It's an oasis that lives in one of the driest deserts in the world. 96 people live in the town, plus whatever visits come. It is described as magical, and it certainly looks it! 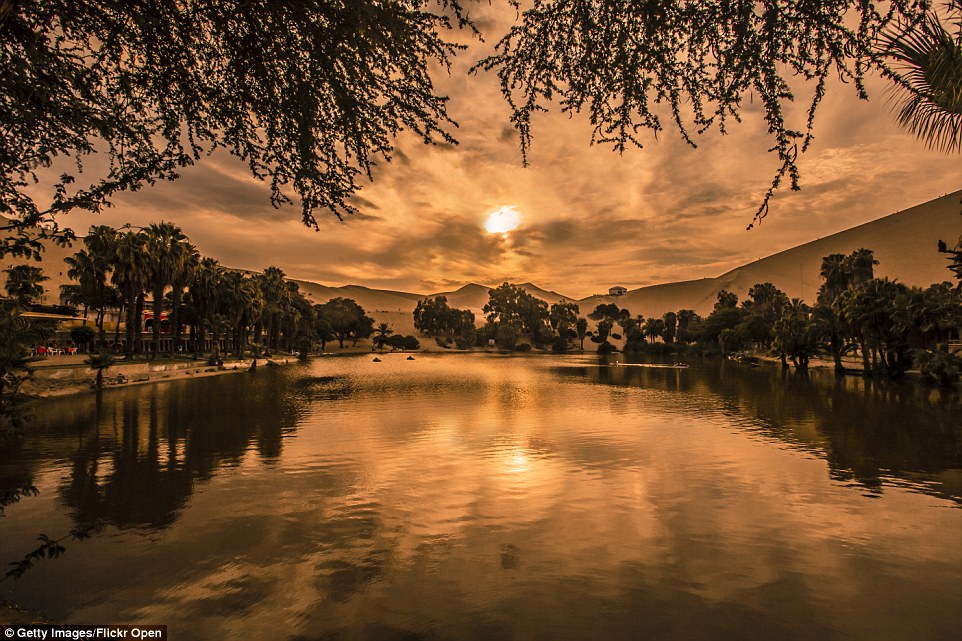 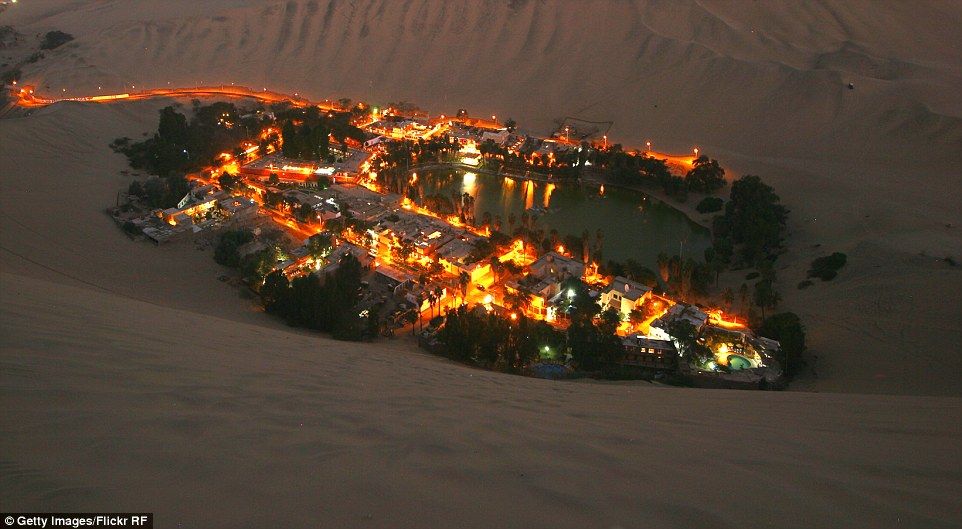 The entire town, Ica can bee seen in this picture as well. 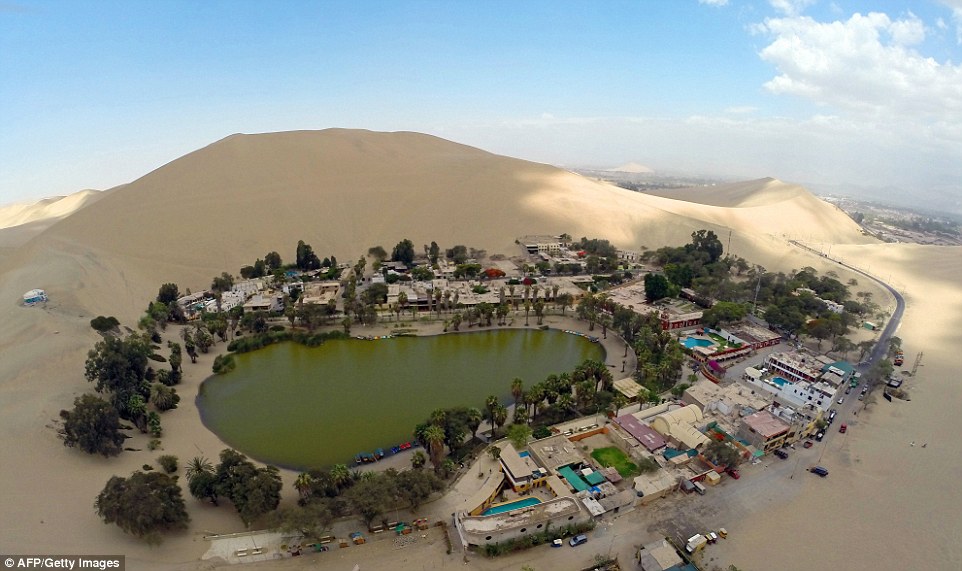 The waters of the lagoon are said to be healing waters. In the 40's only the wealthy could afford to visit Huacachina. Now everyone comes for things like Sand boarding, dune buggies, etc...

The lake is naturally formed, but there is a legend that a young princess was bathing when she was discovered by a hunter and fled, leaving behind a pool of water. Her flowing cloak was said to have created the surrounding sand dunes.

Now, descendents of the Inca people make their living by hosting guests coming from afar to climb to the top of a wind-sculptured sand dune and watch the sunset illuminate the golden landscape, before sailing down the slopes on rented sandboards or dune buggies.

It is called the "Oasis of the Americas". One of the last Oasis in the North and South America, and it's about 300km south of Lima.

You can see Ica in this picture here, where it is 4km from 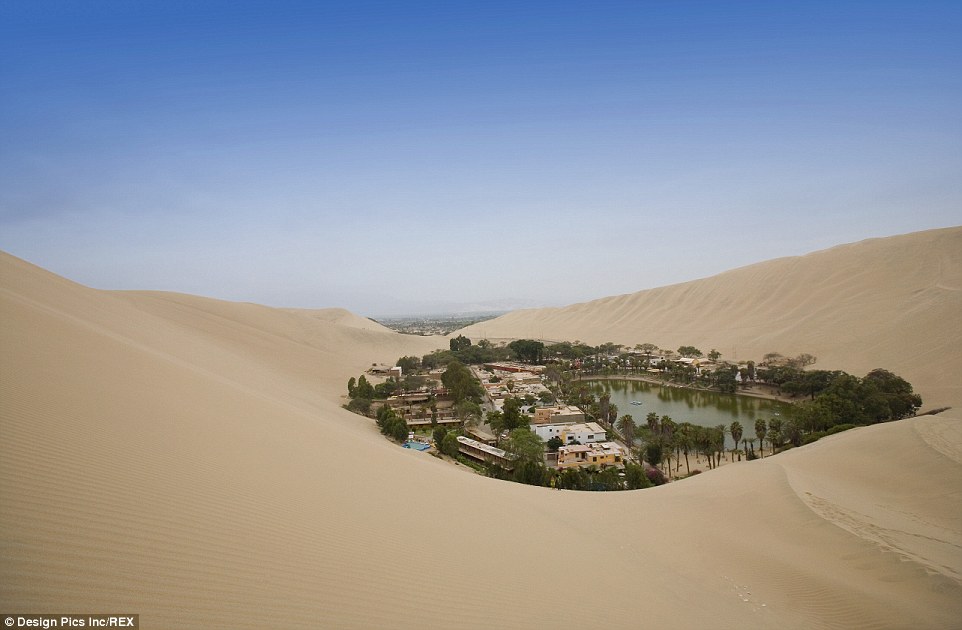 
Due to landowners building wells to access groundwater, coupled with evaporation during summer high temperatures, the lagoon water levels have dropped over the past few years.

In an effort to combat this, water has been pumped into the the lake from Ica for Huacachina inhabitants.

The area has been declared a national cultural heritage site, by the National Institute of Culture, and it is hoped that this tranquil oasis will never become a mirage in the desert. 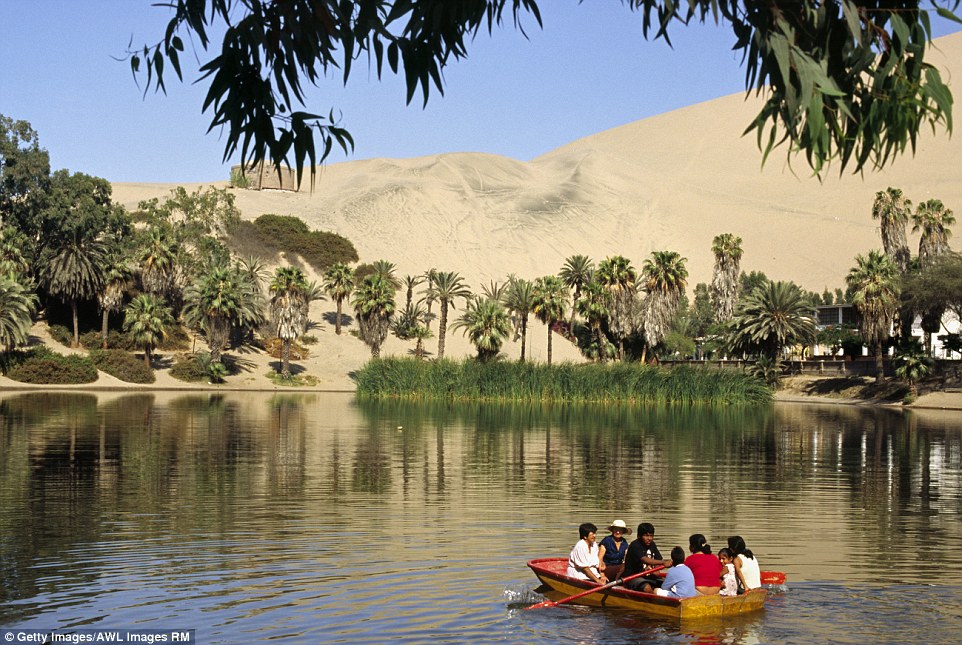 Asturias Spain.....its a freaking paradise. Beautiful and full of awesome people. No joke. I dont know anyone who has gone and not loved it.

Have a glass of cider for me if you go.

I warn you, you may want to move there...

The most cool beautiful place on earth is.. My bedroom. Want Proof, just ask my wife! LOL

To be fair, it's painted blue and decked out in black light posters or rock stars and posters of playboy pinups - this is the same room the wife sleeps in. Yeah, and I'm retired at 47 LOL. We had a deal - She marries me but in exchange dont seek to change me in any way - this includes the Man Cave I call a house for the past 10 years.

The Kitchen? Equaly manly, as is the living room - no girly touches in my house. Most guys should be so lucky LOL. It's easiy had but most guys are Dumb and would rather cave to the notion that they have to make space for the girl and let the girl decorate the house. LOL.. so silly.
edit on 1-3-2015 by JohnPhoenix because: Reason Not given due to unfair censorship rules the owners think are cute.

Ahhhhh... the beach. No place like it, especially at sunset (at least on the west coast!). I grew up by the beach, I will always be a beach bum in my heart, and the beach will always be "home" to me...

But the most awe-inspiring place I've ever been is Sequoia National Forest. No other place has filled me with the awe and amazement of standing among trees that are hundreds of years old, with trunks ten times bigger than you and 100 times taller than you. It fills me with a wonder and majesty that words cannot describe. Yosemite comes close, and the Grand Canyon, but even they don't match Sequoia.

Wherever you go -- enjoy!