posted on Mar, 1 2015 @ 09:59 AM
link
An interesting story about Yellowstone Park's hottest river is getting hotter, despite freezing cold temps. Park authorities theorize that it may be due to cold water that flows through underground sinkholes into the Boiling River is getting diverted somehow, but they're not sure how. Thus, when this cold water is blocked from the hot river it doesn't get to cool down. In the article, they said that even on the coldest day of this winter there was quite a raise in temps. The other theory suggests that a cold river that flows into the Boiling River is at a low stage because of frozen snowpack up in the mountains, but, wouldn't this be the case every winter?


But park regulations allow swimming in many places where hot water meets a cold water stream — like where the Boiling River meets the Gardner. The swimming hole is located within the park between the North Entrance at Gardiner and Mammoth Hot Springs.

Longtime locals swimming at Boiling River on Feb. 22 told Livingston Enterprise Managing Editor Justin Post the water seemed hotter than they've ever remembered it. A small cascade of hot water which in the past has been pleasant to sit under was unapproachably hot one recent Sunday, Post said.

Heasler, who has been with the park for about 12 years, said he and his staff aren't absolutely certain what's going on, but they are examining a couple of theories.

Perhaps a "cork" effect happens on extreme winters? Water volume expands about 10% during the freezing to ice process jamming in rock fissures, crevasses.

A long drive to the Condo hot tub for cooler water!

originally posted by: Granite
a reply to: Rezlooper

Perhaps a "cork" effect happens on extreme winters? Water volume expands about 10% during the freezing to ice process jamming in rock fissures, crevasses.

A long drive to the Condo hot tub for cooler water!

I agree, this sounds logical, but this surely isn't the coldest winter Yellowstone has had. Last year was worse than this year and I'm sure there have been others, so why is this something new?

Not that I don't think it's something explainable like this, just asking why the process would occur now to raise the temps. Maybe it could be the fact we've had two bad winters in a row and the summer may have been cooler.
edit on 1-3-2015 by Rezlooper because: (no reason given)

One theory is cold water flowing into the Boiling River through underground sinkholes in the underlying travertine is being blocked or diverted somehow.

A test of the hypothesis happened by accident last summer when water flowing into a sinkhole was temporarily diverted while park staff addressed a small area of invasive plants.

While that water was diverted, the temperature of Boiling River increased, Heasler told the Livingston Enterprise (http://(link tracking not allowed)/1BquuPK ).

Heasler had another confirmation of this theory in January. On one of the coldest days of the winter, the Boiling River temperature climbed to 140 degrees.

"I went and looked, and the sinkhole had frozen over," Heasler said.

posted on Mar, 1 2015 @ 11:05 AM
link
Defective thermostat. They will need to take apart Yellowstone to replace it. Hopefully the pressure relief valve isn't stuck.

They do present a few believable theories in the article..

Itd be nice to see some historical temp stats.

That's just it, they don't really say whether they've had these warmer-than-usual spells and you'd think they would have that data.

posted on Mar, 1 2015 @ 03:18 PM
link
There are several articles in the area all saying the same thing about the water being warmer.

When you look on the USGS site that monitors the Boiling River it looks like the temp is going down the last few days?? 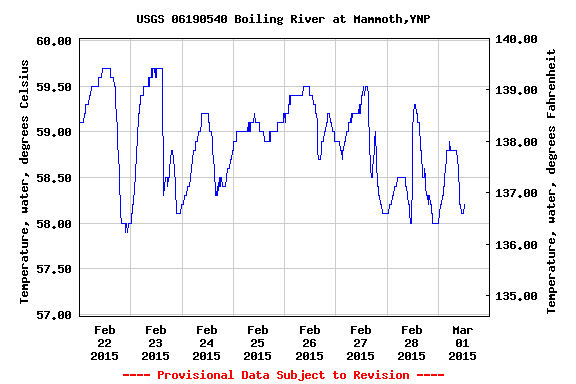 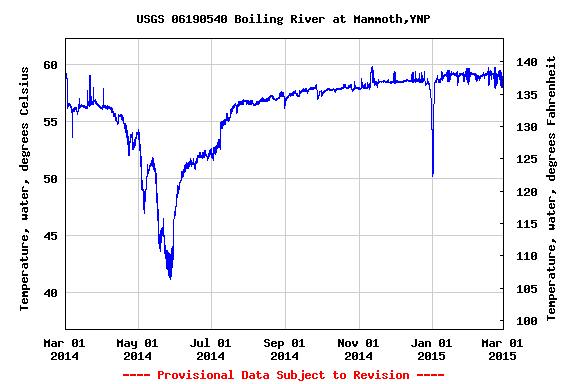 It's not even the initial damage that is most devastating. Imagine how it will disrupt our nation-wide long haul trucker drivers and their delivery of food and medical supplies. The aftermath would send us into a state much worse than the Great Depression. That's not even taking into account the potential years of 'nuclear winter'.

That said, I am still a man and a part of me wants to be a bada$$ in some apocalyptic world

Without looking too deep into this (I'm sure others here are more aware of this river than I am) it seems logical to me that a colder winter, and an increase in ice preventing cold water from entering this system, would result in higher temperature output.

If the resulting temperature is produced by hot and cold water combining, then a rise in temperature of the output clearly suggests the level of cold entering the system has been lowered. As this correlates to a severe winter, it seems logical to me that the cold input is iced up more than it normally would be.

originally posted by: Eunuchorn
I seriously cannot wait for this baby to blow. I pray it happens in my lifetime.

LOL, I love your posts. Keep it up! 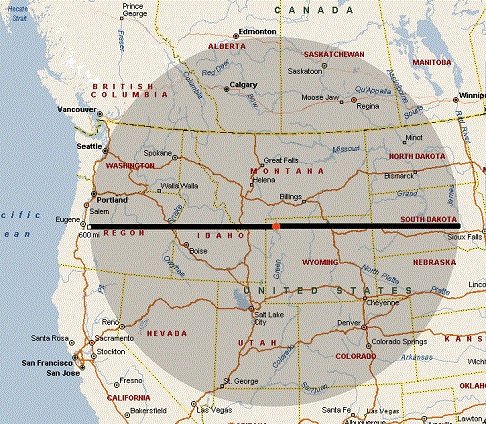 95% of all living organisms in that radius will die. & the eruption would last a few months, minimum. 9ft tall piles of ash would likely cover most of the United states in no time.

I wonder what activity is like at any of the other super volcanoes around the world. More volcanoes are erupting around the world currently than in recorded history, with 95% of them being underwater. The real cause of global warming.
edit on 1-3-2015 by Eunuchorn because: (no reason given)

Actually it all depends in the magnitude of its eruption. We don't know definitively if it will go boom with power levels over 9000 [DBZ reference]. But yes it would potentially decimate the USA and throw us into a global 'nuclear winter'. Potentially globally devastating. My post wasn't an attempt at undermining the gravity of the situation but to address your eager anticipation of such an event lol.

posted on Mar, 1 2015 @ 11:08 PM
link
I'm not sure if its a good or bad thing that I live in the vicinity of Yellowstone. I'm sure the initial blast and shock wave would be devastating.
edit on 1-3-2015 by drapheus because: Spelling

originally posted by: drapheus
I'm not sure if its a good or bad thing that I live in the vicinity of Yellowstone. I'm sure the initial blast and shock wave would be devastating.

Depends on whether you prefer a quick death, or slowly drowning in volcanic ash. ~$heopleNation

I know it wasn't I was merely elaborating lol

I have a book written in the 80s called The Earthquake Generation, it talked about a Volcanic explosion in the 1800s that sounded like a gunshot up to 2000 miles away.

Can't imagine the sound that might come from Yellowstone

posted on Mar, 3 2015 @ 08:33 PM
link
a reply to: Rezlooper
Who knows! But maybe hopefully things are starting to heat up under them hills. One can only hope though.

But even if they are the actual results would be kind of obvious to miss and still take a long time in coming before it becomes so obvious even most people would be scratching there heads and wondering why its raining ash in the middle of July in New York. Or at least from a human timespan perspective, but you know whats a few thousand years to mother nature. A blink of a eye? Not even that.

So who knows. Probably this winter is just warmer then normal.