Leonard Nimoy, the sonorous, gaunt-faced actor who won a worshipful global following as Mr. Spock, the resolutely logical human-alien first officer of the Starship Enterprise in the television and movie juggernaut “Star Trek,” died on Friday morning at his home in the Bel Air section of Los Angeles. He was 83.

Very sad new that this legend has passed away today, one of the greatest loved actors in Sci-fi I am sure will be missed by fans all over the world.

Live long and prosper!
edit on 27-2-2015 by OtherSideOfTheCoin because: (no reason given)

Leonard Nimoy's sojourn may have ended, but Mr Spock will never die.

I love you Leonard. You will be missed.

In later years, he rediscovered his Jewish heritage, and in 1991 he produced and starred in “Never Forget,” a television movie based on the story of a Holocaust survivor who sued a neo-Nazi organization of Holocaust deniers.

In 2002, having illustrated his books of poetry with his photographs, Mr. Nimoy published “Shekhina,” a book devoted to photography with a Jewish theme, that of the feminine aspect of God. His black-and-white photographs of nude and seminude women struck some Orthodox Jewish leaders as heretical, but Mr. Nimoy asserted that his work was consistent with the teaching of the kabbalah.


His religious upbringing also influenced the characterization of Spock. The character’s split-fingered salute, he often explained, had been his idea: He based it on the kohanic blessing, a manual approximation of the Hebrew letter shin, which is the first letter in Shaddai, one of the Hebrew names for God.

“To this day, I sense Vulcan speech patterns, Vulcan social attitudes and even Vulcan patterns of logic and emotional suppression in my behavior,” Mr. Nimoy wrote years after the original series ended.

But that wasn’t such a bad thing, he discovered. “Given the choice,” he wrote, “if I had to be someone else, I would be Spock.”

One of the best scenes in sci-fi history (in my opinion):

Bye Leonard. Thanks for the unforgettable character and for putting up with Bill Shatner for so long. You're a hero.
edit on 27-2-2015 by InverseLookingGlass because: (no reason given)

We should all be so lucky!

Vulcans believe in souls. The love will live on. 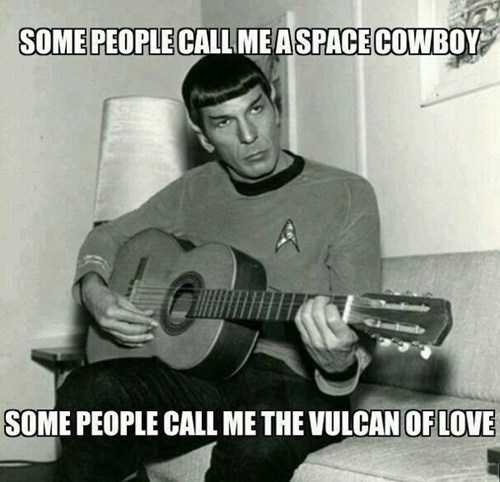 "Change is the essential process of all existence." - Spock

He will once again be able to explore the depths of the universe as star dust. Beam him up Scotty

posted on Feb, 27 2015 @ 11:32 AM
link
I used to watch "In Search Of" with him narrating. Not sure if it was his voice, or the music, but it was always creepy, but wonderful. A very talented man. He leaves an amazing legacy behind.

DAVID64
+4 more
posted on Feb, 27 2015 @ 11:36 AM
link
As I get older, more of my childhood heroes are fading away. Either forgotten or dead, they are gone now and Spock was one of the first.
Live Long and Prosper.

By the way, his final tweet, 4 days ago, contained the phrase "Live long and prosper."
What are the odds? I'm pretty sure it wasn't the only time he ever tweeted that phrase, but I'm equally sure it wasn't in every tweet he made.
edit on 2/27/2015 by 3n19m470 because: (no reason given)


Ok, I looked. I originally read it from the news source where I discovered that he passed. He uses a shortened version "LLAP" in most of his tweets. I copied his tweet here: "A life is like a garden. Perfect moments can be had, but not preserved, except in memory. LLAP" Still pretty cool...
edit on 2/27/2015 by 3n19m470 because: (no reason given)

That is pretty awesome I think

posted on Feb, 27 2015 @ 11:50 AM
link
Condolences to his family and friends, he was a legend and definitely a cultural icon that spanned many generations.