The first question is why?

We deal with those issues in theory


Identify the leaders in question


Then with a massive mass media, social media and Internet and a world wide awesome campaign which would include following these leaders wherever they go with massive bodies and protests in the thousands

This, btw, would include people in their own respective countries amongst the campaign


We could do massive social media campaigns urging the youth of ALL countries TO STOP JOINING THESE ARMIES!

Indeed now that we have potentially the ear of the whole world we could take advantage of that by spreading Martin Luther King, Gandhi type messages to the masses


Take the Ukraine where war is becoming inevitable that can spread all the way to a World War.

We follow Putin, Obama, and the Ukraine respective leaders, including the insurgents and embarrass them constantly on social media and even follow them around with massive protests to make peace

WE WANT TO BE IN ON THE NEGOTIATIONS
DEMAND IT

WE ARE TIRED OF BEING LEFT OUT

WE FIGHT AND DIE IN THESE STUPID WARS

For what I can understand.. it "seems" nobody wants peace.. (we live in dark ages...again!) although, all the available mass media. it's a non-sense, isn't it?

posted on Feb, 25 2015 @ 06:33 AM
link
Great sentiment. I truly wished it could work. But those who profit from war profit greatly and manipulate both politics and media to the point where no dissenting opinions can be made.

Also look at what has happened to those who preach peace Throughout history...MLK, Gandhi, Jesus, the Kent State Kids, etc.
doesnt end well.

posted on Feb, 25 2015 @ 06:34 AM
link
I have personally been thinking about this myself. Enough is enough. Let's organize. Let's get active. It may be a pipe dream, but nothing is accomplished without the dream first.

posted on Feb, 25 2015 @ 06:36 AM
link
sounds like a great start, imagine what we could achieve without war, I'm in.
I always thought a sports game would be better way to solve differences, or maybe boxing match between leaders.
Don't know about Gandhi though he was an anti semitic who supported the caste system.

posted on Feb, 25 2015 @ 06:52 AM
link
I personally support no system except the one to stop hurting each other. This isn't about politics or religion, its about people not killing each other. Very simple concept, very difficult to accomplish because of the deep seeded hatred we have for one another. Face it, we are born and raised in violence. This is a mindset change.
edit on 25-2-2015 by wrathofall because: (no reason given)

I think we're a few evolutions away from that no longer being a part of humanity. until we can somehow get to the point of eliminating the possibility of a person liking their neighbors' "stuff" more than they like their own, there's going to be conflict.

S&F I do believe that probably for the first time in history we actually have a huge voice via social media that does actually influence politicians simply because it gives them an idea of where civil discernment actually lies. We all know where it lies, its just they seem blind to the desires of the publics they serve and only open to their string pullers secret agendas.

A world peace media embarrassing politicians and showing them the publics of the world are united and won't buy into their media led wars, mostly caused due to either keeping up a failed monetary/banking system afloat or stealing resources from other countries.

Life is more transparent and we should be supporting our whistleblowers to the hilt. I believe everyone is utterly sick of the sly, underhand and disgusting policies our governments pursue - in our names - but for someone else we have never met.

Yeh to a World Peace Movement. I'll sign up.

We can't evolve without trying now. Now is the time. Not later. Right now.

Take your point completely, but today I do think that with the interfering in country's in order to start wars and then profit from them is simply a step too far for our current stage of evolution. I suspect we are all thinking that our politicians have simply gone too far and need to make a change in policy, which without our getting in their faces to instigate that change, nothing will happen.

We all know that its our blood that will be spilt for their wars not their own as they and the royals of life humker down in their bunkers till its all over an d they can profit from the pickings. That's a game I am not prepared to tolerate any more and I sincerely want change.

well I have no experience with DNA, so I can't really speak to getting rid of people that think "that way."

personally, I like my "stuff" just fine and have no desire to take anything from my neighbor by force.

I have no idea where you are coming from. Maybe we are misunderstanding each other.

so until a way is figured out to eliminate that from the human psyche, world peace isn't going to happen.

posted on Feb, 25 2015 @ 07:22 AM
link
In a world of limited resources and growing populations there will always be war somewhere. It's a great dream this peaceful utopia, but it will not be a reality for a long time .. if ever. There are too much competition around the world for resources and power, not to mention war profits. Here look at it this way, even if we the Western world destroy all of our weapons and decide to live in peace in what we have, how long do you think before that peace is broken? I give it five years max. Someone, somewhere will be greedy and take advantage of the situation. Unfortunately the only way to secure peace for us is to always be armed to the teeth. "Peace through strength" is the only way to secure our temporary peace.

posted on Feb, 25 2015 @ 07:24 AM
link
The following article presents a theoretical case as to why a "World Wide Peace Movement" may be impossible. I would never claim that any of it is exactly correct but it sure seems to fit reality fairly well in many ways in my opinion.

Quoting from "UNDERSTANDING THE REPTILIAN MIND" By James Bartley:

The reptilians are the Controlling Factor. One cannot understand why there is constant strife, tragedy and turmoil in the world without first realizing that the human race is under the control and domination of a Cruel and Remorseless Intelligence.

David Icke made an invaluable contribution with his book "The Biggest Secret."

I will elaborate on some themes that Icke had brought up. The draco-reptilians ARE in control. Despite Icke's information exposing the ruling reptilian bloodlines, there persists this feeling amongst many that the reptilian overlordship doesn't have any direct impact in their own lives.

Some people are willing to believe that the British Royal Family and the so called Eastern Establishment are reptilian-human hybrids but they are unable or unwilling to see how their quality of life has been eroded by these same reptilian-human hybrids. Policies are initiated by these reptilians which are then passed down through successive lower echelon underlings who take the necessary actions. The end result is all around us: The quality of life (QOL) has been severely degraded for the vast majority of humans on the surface. This was entirely predictable. And these lizard creatures leave their phallic symbols all over the place just to rub it in our collective face. I'm seeing more and more Obelisk at SHOPPING MALLS these days.
whale.to...

Yes I actually completely agree with you. I know this to be true even within myself. Not only are there people with mental issues, but the rest of us are bombarded with violence everywhere we turn. My only point is that nothing will change if we don't start working towards it. We really need to work towards a world where we don't kill each other. And yes, it may never happen. But I'm to the point in my life where I realize that I would rather die trying, then to have never tried at all.

We have to take baby steps. A peaceful world if rainbows and unicorns is a long long way off. I think we all realize that all too well. To me, this is about learning to crawl first.

agreed. it's a noble enterprise. as the saying goes, aim for the moon....

hmmmm....you can chase the puppets and cut their string...but the puppeteers just laugh and create new puppets....

you see the puppeteers care not for which theatre they play ....as long as the theatre operators pay the price.

you can chase the Obama's and the Putin's of this world but they do not run things...

puppeteers like Chaney and Rumsfeld and the puppeteers behind Putin ....they work for the theatre company...

Chase up the Rockerfellers....or maybe the Rothchilds...the Vatican...The royal families...the old money...then one might be scratching the surface.... just a thought of directing it to the right areas of concern.


"Give me control of a nation's money
and I care not who makes the laws."

also these wars were created and are being executed with precision and poise. 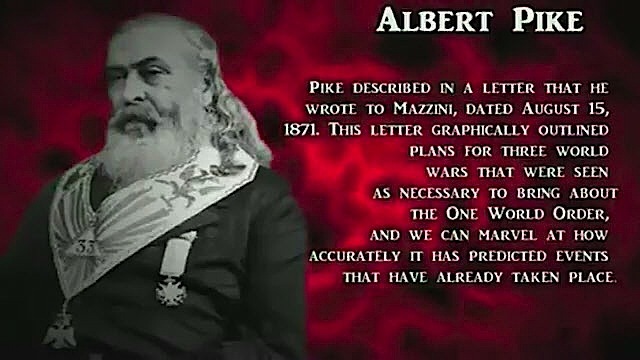