Not exactly pets, but too damn cute...

As long as they are trained well and not just gnarl on every other human not wearing uniforms.
My father did SCH3 training with his malinoise and completed. This dog I tell you will safely take a goodie out of childrens hands, recycle empty joghurt cans into the trash bin after licking it clean and pull hairgums gently out of womens hair
But if someone want´s to harm you, she would step in, take the assailant to ground, let off and sit before him just waiting if the attacker is still on rage or when he backs up, let off and return next to your foot.

The difference however is, what I saw with those K-Dogs, that they just go full in on everybody they get sent to. And even continue the hold even if the "victim" is not struggeling or moving.
That´s what shadows the training of dogs. That´s my impression.

Also, I imagine some of their humans are better trained than others.
edit on 2/25/2015 by ~Lucidity because: i can't type in the morning!

Hard to believe. They are so cute!!

posted on Feb, 25 2015 @ 10:40 AM
link
Im not one who normally admits cuteness, but these little buggers are cute!!, i want them all!, may they bite the arses of the crminals who run or attack!. Hope they have a safe and long working life, and a pampered retirement!
All the best.
B. V. H a reply to: ~Lucidity 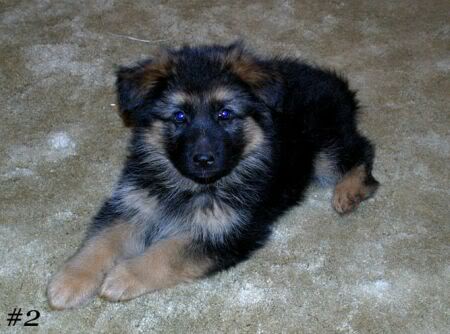 How adorable!!! I want one!

Do you mean that's a pic of the dog in your avvy when he/she was a puppy?

Yes, that's the first picture I saw of Jaia, my boy in my avatar.

Amazingly cute puppy and amazingly beautiful dog. Jaia is a cool name too.

Aw, thanks. His name is RaJaia Vom TeMar. I made up the first name. Here's his pedigree.

Giving them names is fun. Especially when you register them and you have to be creative and come up with two. (I think it's two...we've only had one pedigreed...and Alaskan Eskimo named Razkalini "Raz" Fafushnik. LOL

You know, I love GS but one bit me when I was five. And now they don't "like" me even though I like them. I think somehow they sense I'm scared of them even though I'm unaware, consciously, and get very tentative around me.

If i was going to choose its number 4 . Something about the eyes . Loyalty and intelligence maybe . May they all serve safely .

I always enjoy seeing your avatar. I hope he does not suffer from HD. He´s ten years old now?
We had an American-Canadian Shepherd. She was rescued from a drinker who abused her and I was asked If I could take care of her. She got to the age of 15 and was a realy gently dog. My father ran a small shop in our town and she was lying on the doorstep to the private rooms, every day. She was so gently, she never did anything harmful except whipping her tail in your face by accident. Kids loved to come and stroke her and she enjoyed it every time. We named her "Kimba".
Sadly we had to release her from her pain, she suffered from HD and later on her spine calcified.

A tip to every dog owner/lover: Do not feed dry foods. We recently went over to fresh meat and some vegetables, no wheat. Our mali had her spleen taken out so her ability to create blood was lowered. She had many operations and narcotics dumbed her brain a little bit down over time. You could tell by her look. She de-poisoned almost a year from that dry food crap (black belly tissue) and now, she´s 12 years old and looks like 5-6 years old, mentally fresh and she begins to see better now. At first she did not accept the food but after some weeks she would not even take a look at dry food.

The problem is the crap that is mixed into it. I saw it first hand at a german food manufacturer named like another famous company that produces electronic hardware. It´s name has 5 letters and starts with "BO".
Avoid that crap, they produce this for over 120 "brands". They all come out of one excenter and if you walk by the ingrediens, there is almost no meat at all in those dry foods. The smell is disgusting and you can shower for two days, still smell like a bag of dryfood. I have to go there four times a year :-/

Edit: And contrary to what people say about feeding raw meat: They do not smell more. This is false. The fur gets better, it´s not that oily and she does not smell at all (except her breath after eating and the occasionaly paunch).
edit on 26-2-2015 by verschickter because: (no reason given)

originally posted by: ~Lucidity
I think somehow they sense I'm scared of them even though I'm unaware, consciously, and get very tentative around me.

I would wager that's true. I was actually a little "scared" to get a GSD, but I got him as a puppy and he's my big ole, goofy sweetheart of a boy! I can't imagine being afraid of him. I also have his 1/2 sister. She's about 5 months younger. They're both treasures. I credit the philosophy of Cesar Millan for how well-behaved they are. I made sure I knew how to be a good pack leader before I even considered the breed.

originally posted by: verschickter
I always enjoy seeing your avatar. I hope he does not suffer from HD.

His hips are good. That's why I went to a good breeder and looked at the hips of their parents before I decided. He's 8.

I'm so sorry about your Kimba. She had a long life and was loved. That's what's important.

I do feed kibble, but it's top of the line. It's called Wellness Core. It's the closest thing to fresh meat and contains no grain. But I'm with you. What you feed your animals is very important to their health.

Good to hear! We went for that with every puppie, except Kimba, she was 1 year old when I was asked if I could take care. There was a room full of people only asking "how much for the white dog?", I happened to be around, I brought some fresh mowed gras to them and was the only one asking "what happened to her??". So they asked me if I would take care of her, man were the others angry at me for asking the right question. So I brought her home. This dog, I tell you, was the lead dog for every other dog that came afterwards. They learned so much from her calm behavior.