You may have heard of the Internet of Things -- the idea that eventually all physical objects could communicate data over the internet to other connected devices.

Already many devices in cities -- from automobiles to thermostats -- communicate information to operators, manufacturers and consumers via the internet about their status. 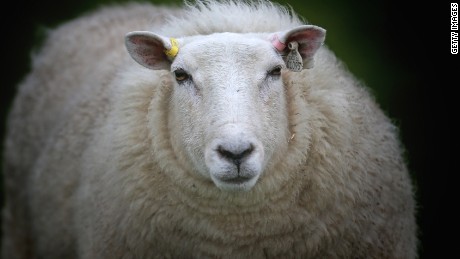 But in rural Wales, a region not noted for its connectivity, researchers have begun a study into the Internet of Sheep, attaching wireless devices to livestock to gather information.
I DUB this "SheepNet"..lol


While it has been widely reported that flocks of sheep in the project could transmit WiFi and improve internet coverage in rural areas, Professor Blair said this is not the aim of the research.

"I would worry about sheep flocking behavior -- I don't think sheep are the right animals to do this.

"Other researchers in north Norway have looked at reindeer. Perhaps reindeer are more individualistic in their behavior but I'm not an expert on animal behavior," he said.

For animals to be effective WiFi nodes, he said, they need to be social but spread out at the same time; a tough ask of nature.

He said the beauty of sheep was that they flock together -- easily transmitting data until the flock come close to an internet receiving station which would take up the data and transmit it to researchers at Lancaster University.


They also say they are looking into Reindeer and larger animals such as cows for the same purpose.
Is it that important to get a Internet connection that we need to use animals as signal boosters? lol This is crazy research if you ask me..BUT I'm certain it has other application not discussed in the media..

*Edit*
Star n flag for making me laugh out loud, oh and for posting the pic of that pretty lil one in your OP...

posted on Feb, 23 2015 @ 01:09 PM
link
I think the article is saying that they are gathering info on the animals and then when they get close to a wifi node the system then sends this data back to the scientists to be analyzed.


Probably data like tracking location, sleep patterns, and social patterns. It's possible to put sensors into the animal to analyze the blood to check for blood pressure and nutritional info. Imagine these sensors being used on every cow, chicken, and pig in the U.S. .......... Then imagine them in every human on earth...........RFID

Your addition "The Sheep.net" would be worth a thousand stars, i can only give you one... and this:

I mean, it's possible, they already did IP over Avian Carrier or IPoAC. Transmitting packets of data via carrier pigeon.

For those who are in the computer industry and like a good laugh, there was an actual ping request done via carrier pigeon by the Bergen Linux user group. Here are the results:

edit on 23-2-2015 by ScientificRailgun because: formatting

originally posted by: Woodcarver
Then imagine them in every human on earth...........RFID

Reminds me of this...

Use of Homeless as Internet Hot Spots Backfires on Marketer

posted on Feb, 23 2015 @ 03:01 PM
link
The NSA has it's own "sheepnet" already, and has been collecting "our" data for many years. America IS Sheepnet, and Obama extended that Sheepnet to be expanded and continued with that last signing of the NDAA..

Oh thank you so much Mr. President, you are a true innovation of freedom. /sarc off

posted on Feb, 23 2015 @ 04:41 PM
link
Sounds like fun research for data crunchers. Maybe if observed for a long enough time there could be derived a mathematical sheep pattern or countless other things can be culled out of the data.