page: 1
23
<<   2 >>
log in
join
share:
DjembeJedi
+12 more
posted on Feb, 21 2015 @ 11:50 AM
link
I cannot get over this Frog or these shots..
US.NEWSCODEX.COM Hendy Mp, a talented wildlife photographer based in Indonesia, has captured what is probably one of the weirdest spectacles we’ve ever seen – a tree frog going for a wild rodeo ride on the back of a giant horned wood-boring beetle. The tree frog is a Reinwardt’s Flying Frog, a threatened species that can glide down from trees with the skin between its fingers and toes.
The wild and adorable scene was captured not far from Mp’s home in Sambas, Indonesia. Mp is a fan of macro photography, and uses it to capture beautiful larger-than life photos of the many different beautiful insects, reptiles and amphibians native to Indonesia. 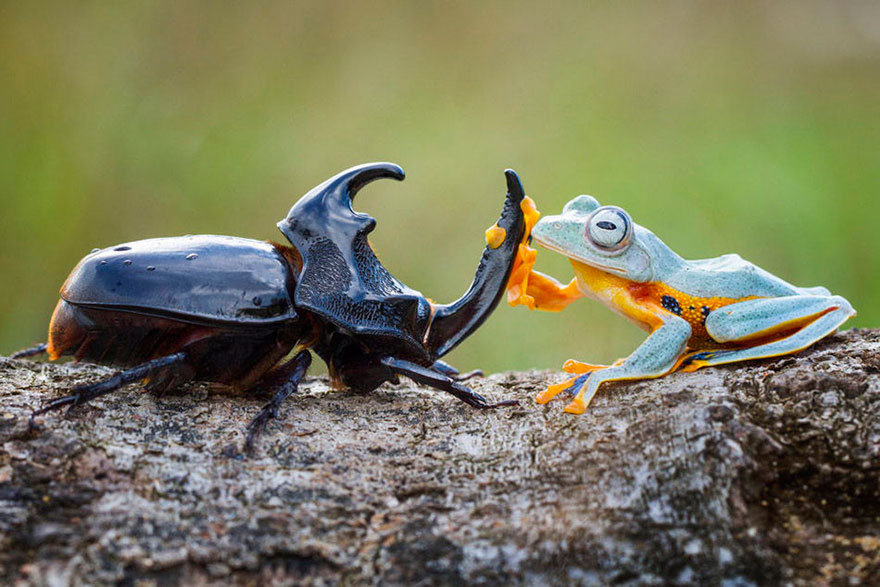 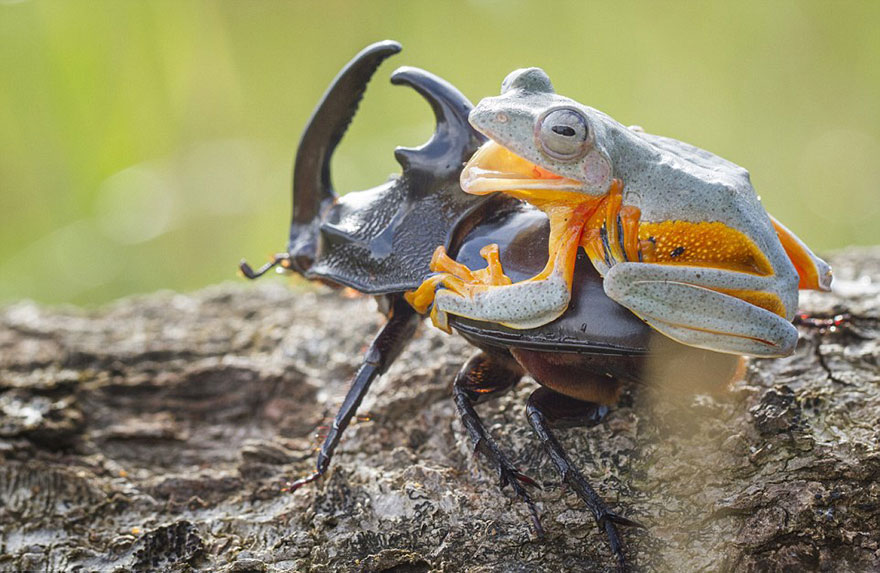 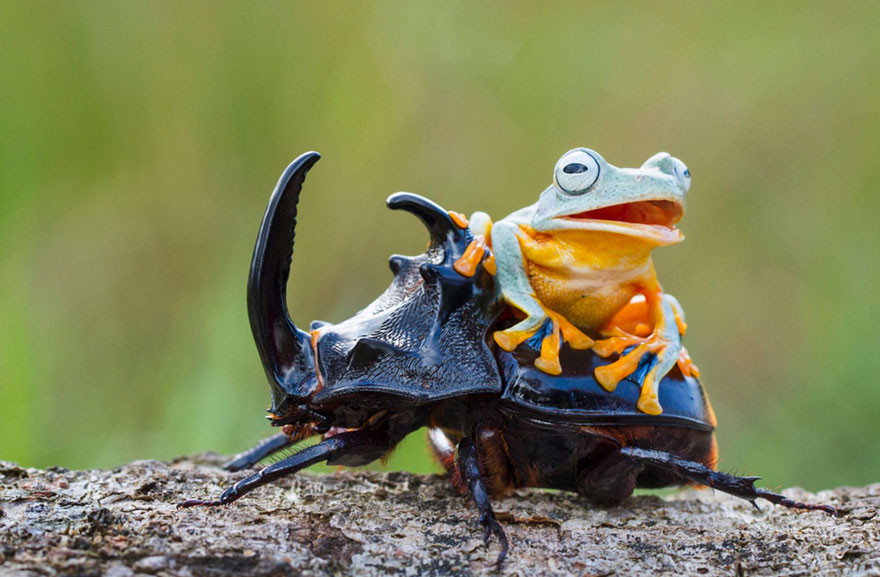 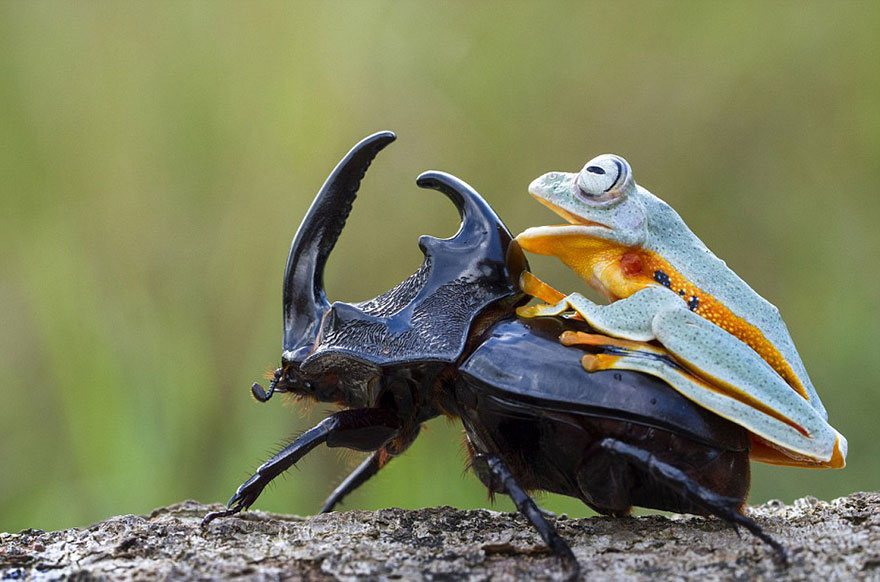 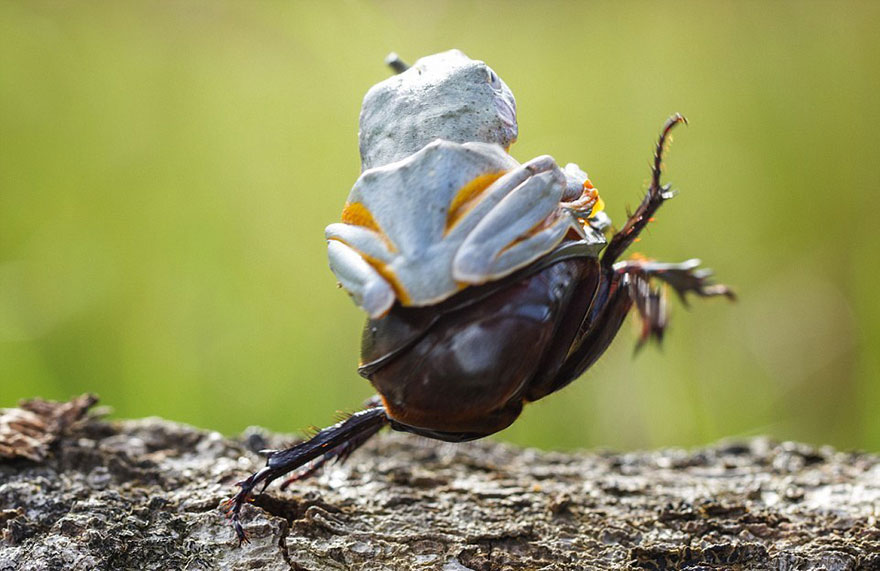 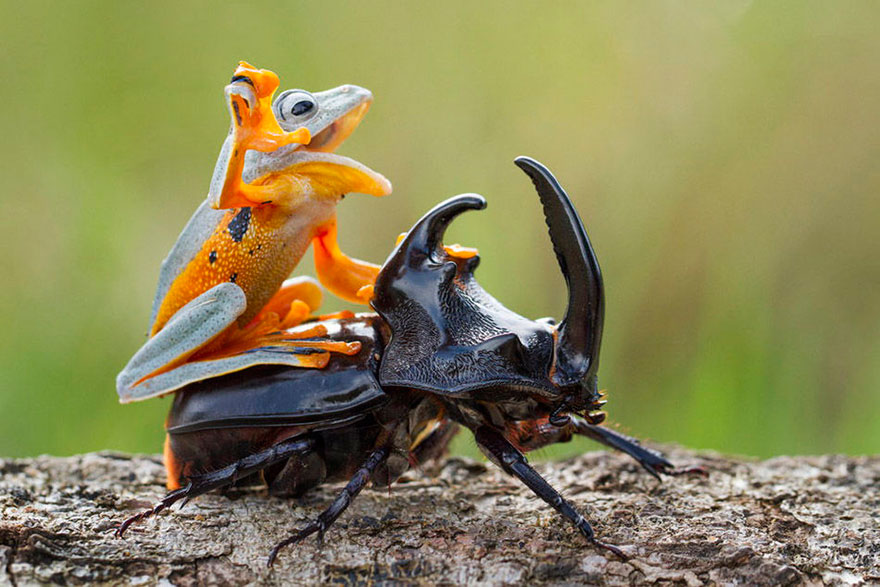 This Tree Frog is probably the coolest guy in his neighborhood...

Wasn't long ago I was reading about how a lot of these pics are made.

...won't go into detail and not saying that is the case here but strings, glue, tape, etc....order of the day.

I don't know....just not buying it.
...even though I'd like to because a frog riding a beetle is REALLY cool

posted on Feb, 21 2015 @ 12:07 PM
link
Oh My Gawd, that's cute AND amazing!
I mean, the frog looks like he's just having a blast-- doing it just for grins (and he does look like he's smiling.)
We think we are so beyond all other life, like our experiences are so uniquely human. This just helps burst that bubble!

Let's not go all anthropomorphizing it just because it "looks cute".

You do realize there are ways that many would find repugnant that this "scene" could be captured, right?

.......then again, maybe you (and others) don't want to know the ugly truths behind a LOT of these pics you see online.

Read and learn because the world is not always butterflies and rainbows.

P.S. Sorry to piss on the parade.
Again though, for clarity, I am NOT accusing the photographer in this particular case of this.
Like I said, I'm just skeptical and knowing what I know about how some of these images are captured has left me a bit cynical and jaded.

It is actually pretty common today to stage the photos.

Here a something about it, and some of the staged photos and how they are possibly made.

The photos in OP are still good though, staged or not.
edit on 21-2-2015 by Mianeye because: (no reason given)

Your first link is the one I had seen recently and is a good one for those not yet hip to this...


The photos in OP is still good though, staged or not.

Define "good" in this instance. "Good" because you (and others, myself included at times) derive pleasure from anthropomorphizing said creatures...even if it's staged? "Good" because it's "funny"....

...because I would have to say that if it is staged and the creatures are harmed, there is no "good" in it.
...for the same reason I don't go to the circus or the zoo.

Animals (and all creatures) are NOT here simply for "our pleasure". I enjoy these pics the same as others but cannot ignore the costs.

What "cost" is too great? Anything for a laugh and a bit of pretending animals feel the exact same way "we" do.

Honestly, the more I think about it...the more repugnant it is to me to "stage" these photos, especially when the creatures experience pain and/or death because of it.

Well, i go from "no animals was hurt or killed in this photo shoot", and then i enjoy the photos hoping that it is like that.

I have a macro pic. of a spider in my avatar, i'm pretty relaxed with that it's probably staged and don't think the spider was in anyway hurt.

That is really all i can do

I loved these photos but now I'm just feeling empty inside.

Thanks for the lesson, I had no idea.

Let's not go all anthropomorphizing it just because it "looks cute".

You do realize there are ways that many would find repugnant that this "scene" could be captured, right?

.......then again, maybe you (and others) don't want to know the ugly truths behind a LOT of these pics you see online.


Jeez, did you wake up on the wrong side of the bed, buddy? Your post sounds rather condescending and accusatory, what with "You do realize..." and "Am I the only one..." and such.

I happen to love all creatures, great & small, and I resent that you assume that I saw anything other than natural wonder and cheered about bug-abuse, or what not. I took it at face value. That is who I am. Thanks for listening.

In my educated opinion, its a fake, photoshoped. I use to do this for fun.

Photoshop artist can spot a fake.

Could be staged as well, and I base this opinion on my knowledge of animals. If I wasn't load-shed, I cound give more info.
edit on 21-2-2015 by IndependentOpinion because: (no reason given)

No, I didn't "wake up on the wrong side of the bed" and my posts weren't accusing you of anything nor were they an attempt at being condescending...just the way I sometimes speak during debate/conversation, not a jab at you or anyone else at all. I'll work on that...


I happen to love all creatures, great & small, and I resent that you assume that I saw anything other than natural wonder and cheered about bug-abuse, or what not.

Did I say that you were "cheering about bug abuse" or whatever? No, no I didn't.
I also wasn't implying that you would or did...even if that is how you mistook my post.


I took it at face value.

Well, therein lies the difference between us.
I didn't know we were now posting at Disney.forums.let's all join in on the cute bug laughs...I thought this was ATS? You know, "deny ignorance" and all that stuff?

If I wanted to discuss stuff like this at "face value" alone, I wouldn't really do it here. I'd go circle jerk with those that are ignorant to the horrors of the world. I am sorry that my direct responses upset you but the truth is often not something people like to hear, especially when they must face the facts and have to reimagine much of what they find "cute" and "funny".....I didn't make it this way.

Likewise....
Hey, at least I read the damned comment you posted, in it's entirety before responding. So, that is a plus.

You didn't look at the links I and others posted, did you?

Go back up in the thread and check out the links to how many of these pics are brought to you.


Well, i go from "no animals was hurt or killed in this photo shoot", and then i enjoy the photos hoping that it is like that.

Yeah, well...perhaps you trust the word of others [strangers] more than I do.


I have a macro pic. of a spider in my avatar, i'm pretty relaxed with that it's probably staged and don't think the spider was in anyway hurt.

I never said every creature that is involved in staged photos is injured or killed.
...but whatever allows you to sleep better.


That is really all i can do

Perhaps...perhaps that is just your own justification.
Either way, it really matters not to me.

I was just providing information that I figured some others might be interested in. Nothing more, nothing less.
Let's not make it out to be like I am the "all creatures" savior, bleeding heart guy... < hint....I'm not.


ETA: I am sorry to everyone that I have to provide 3 separate responses and pollute the thread...but for some reason, when I add more than one user in my comments, they aren't posting for the last few days. I can even go back to "edit" after adding multiple users for multiple responses in one post and they are there, but they won't post for some reason. Not sure about that or why it's been recently happening.

^just wanted to add that.

In my educated opinion, its a fake, photoshoped.

Could be staged as well

I take a bunch of photos of a frog in its natural involvement, and then using that photos as reference, I take photos of a beetle. Then in Photoshop, I take the background out of the frog photos using either the Pen Tool, or the Quick Selection Tool, and Photoshop the frog onto the beetle, and adjust the shades and colours using either the Brightness/Contrast - Adjustment Overlay, or the Exposure - Adjustment Overlay.

This is Fake, and Photoshoped. The photos are real, but Photoshoped into one.

Stage the frog in the way you want it to be, and take photos. Then, in Photoshop again, use the Spot Healing Brush, Healing Brush or Patch Tool, remove the unwanted objects from the phots.

So, again, both fake and Photoshoped.

Being both a photographer and an Photoshop Master, I know the methods.

posted on Feb, 21 2015 @ 06:26 PM
link
The article cited by Jakal26 emphasizes that the trend of taking posed and manipulated photos of tiny animals, is particular to Indonesian photographers.
After reading the article, and seeing several pictures of posed tree frogs from Indonesia, and subsequently seeing that the photographs in question are, indeed, from the same region....

it is logical to conclude that I will not rain on the parade of those personifying tiny animals.

"sedated or even dead"... [censored] you Francis, you're too idiot to understand how it staged. It is very easy and harmless, I can reproduce 1000 times if you will. Setting up is not something uncommon. You shoot a jumping around dog chasing a ball is also a set up. A woman riding a horse is another example. You only like to accuse to satisfy yourself, which has no different with [censored]. [censored] !
August 8, 2013 at 11:02 PM