Its a universal truth...

I don't have any, just wondering.

posted on Feb, 21 2015 @ 08:57 AM
link
I know for a fact its not universal. I also know that more people I met with tattoos do regret some of them. I do not have any. Reason, My father had several ex-girlfriends names, a swastika, a dirty dozen biker tat, love and hate on his fingers, and several more. (He regretted them deeply.) I have a good friend that has a band around his arm that looks like hell and had him on my couch sick as a dog. We put The Truth About Cats and Dogs in the VCR, handed him the remote, and went out of town for the day. (He regrets it deeply, He also regrets the tattoo. ) I had another friend that had several morbid cartoons on him. One being a zombie doll holding a dead frog. (He passed at the age 38 and loved all of his until the end.) a reply to: Borisbanger

Did his mum and dad love them too?

Psh. Hardly. When it comes to people, there's rarely anything close to a "universal truth."

posted on Feb, 21 2015 @ 09:25 AM
link
I have a tattoo I regret,its not why you think though. I get stress hives on my neck shoulders, even my ears this time. So the tattoo I have at the base of my neck has needed to be reinked twice. I'm ready to have it removed.

Nah, not true...sorry.
I have a lot of elderly neighbours, and many of the men have tattoos. Some are military related, and these men are still proud of them.
I've known older women who had tattoos of names or memorials to family members...and they don't regret them at all.

Every individual has a different reason for getting ink.
I'm sure a lot of people do regret them, but not all.
The reasoning/motive behind the tat, probably has a lot to do with it.

Exactly. All of mine have a deep, deep meaning to me. No cartoon characters for me, thanks. Mine are all things that are part of the very "fabric" of me.

Since I can't come up with anything or any situation that would make me regret these aspects of "me," I don't see much room for regret.

Guy with NO tribal armbands

That is not a universal truth.

I thought about it for YEARS before finally getting mine, and years later, I could not possibly be happier to have them. The people to whom your assumption applies, are folk who have gotten their tattoos without any forethought of worth, have not paid any mind to their future, and the consequences that could come about as a result of their choices.

By definition then, there may be some who might have such regrets, but those who get inked having thought deeply about it first are not likely to develop regrets later.

Hey, I actually like tribal armbands, lol.
My partner has full sleeves, and a lot on his chest and back. He doesn't regret a single one.

There is a good tv show about people who DO regret their choices though. Tattoo Nightmares

Some of the stories behind the bad ink is hilarious!

posted on Feb, 21 2015 @ 09:36 AM
link
Oddly enough, they either did or hid the dislike very well. His mom was the one to have him show them off to us when we first met. Then again, they were odd ducks. The whole lot. They moved from Las Vegas to the Bible Belt. I think he was the exception, not the rule.
a reply to: Borisbanger

But whoever got this one will regret it for sure...

I enjoy the process of getting the ink done and I like what I get. Mine aren't necessarily 'deep' representations of anything, though. 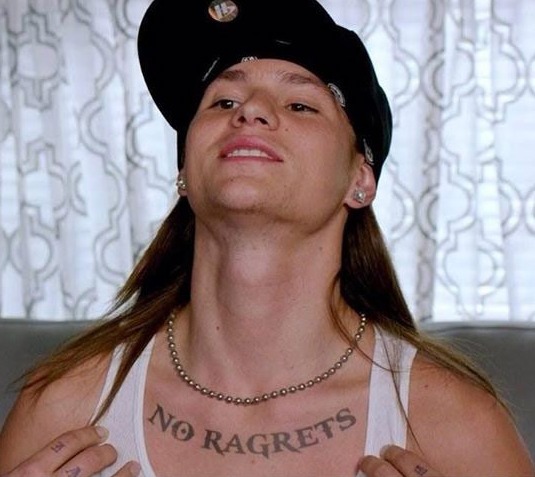 Did his mum and dad love them too?

Moving the goalposts ready, are we? So is it now: "Anyone who gets a tattoo will either regret it, or someone they know will?" Well, I still cannot accept that as a universal truth. What if a man lives up on a mountain, all alone, gives himself a tattoo, then dies before he ever makes contact with another person, and his body either decomposes or is eaten by animals, destroying any sign of the tattoo, so none of the people he knows from civilization has had a chance to regret it, and he himself did not regret it? Huh? What then? What then, sir? How far can you retreat before you have to admit to yourself that this "universal truth" of yours is nothing more than the poppycock ramblings of a man in the depths of an ether binge?

We are happy you are able to disprove the post.

We at Interzone were concerned that Ats was becoming too trivialized.
We like to encourage and foster key board warriors with a keen nose for the mildest inaccuracy.
For that reason we will keep your details on file and if a suitable vacancy in our irony dept comes up we will contact you.

In the meantime on another thread there is somebody attempting humour which you may also be interested in tackling.

Thank you for your interest.

Not even close to a "universal truth"...

*says another guy with ink.

I don't think it's the tattoo people regret as much as the getting old and it looking like a stupid decision of youth instead of a tattoo on a young body.