The Top 10 Happiest (And Saddest) States In America


a new study from Gallup-Healthways tried to determine the happiest and healthiest states in the country by analyzing over 176,000 interviews with people across the country during 2014. Interviewees were asked questions that assess their feelings about five different aspects of well-being: purpose, social, financial, community, and physical. These questions measure specific things such how safe people feel where they live or how motivated they are to follow their dreams. 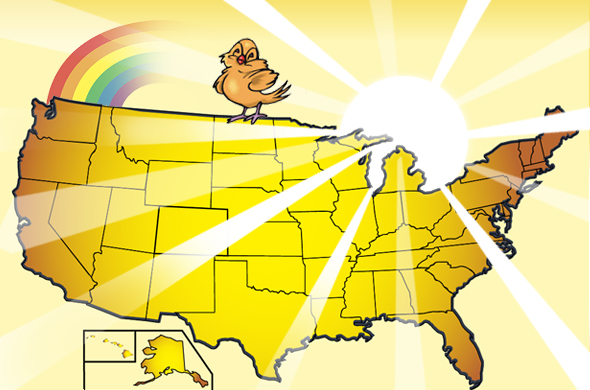 And here are the bottom 10:

On a serious note, what do most of the states have in common? Interesting that a few top make a straight line almost down the Mid West portion of the country.

posted on Feb, 20 2015 @ 07:33 PM
link
Having moved last year from New Mexico to Missouri, I went from the bottom of the top to the top of the bottom, if that makes sense. I was unhappy in NM, now happy in MO. It's all relative, and don't think for a minute that everyone is happy in Alaska, or unhappy in West Virginia.

originally posted by: ttropia
My guess would have been Colorado and Washington at the top followed by Alaska.

On a serious note, what do most of the states have in common? Interesting that a few top make a straight line almost down the Mid West portion of the country.


IKR..I noticed that as well as the majority of the unhappiest are southern(ish) states..

originally posted by: Lazarus Short
Having moved last year from New Mexico to Missouri, I went from the bottom of the top to the top of the bottom, if that makes sense. I was unhappy in NM, now happy in MO. It's all relative, and don't think for a minute that everyone is happy in Alaska, or unhappy in West Virginia.


Ha how funny. as far as ALL the people(s) feelings in their respective state of course not..BUT it does give a relative overall "Attitude" for the states relation to the others .

I'm going with any country with decriminalized marijuana laws is making that top 10.
edit on 20-2-2015 by ThinkingCap because: (no reason given)

I in NO way feel this is a "Scientific" study just interested in your opinions on the rankings..

I'm going with any country with decriminalized marijuana laws is making that top 10.


No real "Science" in the study BUT its still interesting as a representation of Public opinion from the diff areas of our country..I was surprised by Colorado placing 6th figured it would be round 3rd..lol

It just hit Me... And I may take some gruff for this, but.... Aren't those the last 2 States admitted to the Union? So less time to be corrupted w/'bidness as usual' ?


Well since the link seems to be a Health and wellness site, the list bares a resemblance to the list of healthiest states.
But as you say, prolly not exactly a scientific study.

posted on Feb, 20 2015 @ 08:46 PM
link
I guess it's true for me, personally. I don't think people are unhappy "generally speaking"around me or in my circles.
I am unhappy anymore often but, that's a personal issue...

I do believe there are two divisions where I live. You are either doing really well or you are doing really poorly.
I feel relatively safe...I suppose...

I am curious what they are doing in Alaska though?!

#6 in Colorado here and I'm quite happy. I don't give a flip about the marijuana that was legalized here, I was happy prior to that anyway. It is sunny on average 300 days a year here, even in the dead of winter, so that helps! Honestly, I'm not real happy in the winter time, but the rest of the year is great!! Business is good, family is good, my outlook on life is good, and I'm generally happy. However, I would be just as happy anywhere I go, this is just my personality. Happiness is a choice and letting the weight of the world pull us down can be hard to overcome, but it is still a choice. I choose to be happy! When my kids are grown and moved out then I will choose to be happy further south where it is warmer!

Washington state or Oregon I would have figured for saddest. That overcast dreary weather is hard to deal with, it messes with your head. I lived up in Washington when my dad was in the Navy, but we were in what they called the Sun Belt. But when I went back to visit in Bellingham and had 2 weeks of sold dark grey overcast and rain, it took a little more work to not let that get to me.

Anybody else think it's telling that the two top happiest states just happen to be the only two that aren't physically attached to the rest of us.

What's that say about us?

It would seem the further from the problems and culture of mainland America you are the happier hence Alaska/Hawaii having such high ranking. Being close knit communities due to isolation probably helps and lack of transient populations that want to change the culture and local government doesn't hurt either. Kind of the way middle America and the south used to be.


Yeah-it's that bad down here.

originally posted by: Cuervo
a reply to: DjembeJedi

Anybody else think it's telling that the two top happiest states just happen to be the only two that aren't physically attached to the rest of us.

What's that say about us?


WoW yeah what does that say about the rest of us on the Main Land?..Great observation.
edit on 2/20/2015 by DjembeJedi because: (no reason given)


Yeah-it's that bad down here.

Sorry to hear that..thanks for checking in though.

Funny you mention the south. Southern culture is the most miserable, angst-ridden culture I have ever had the pleasure of escaping. There does not exist in the deep south one person who does not revel in woe, who is happy in any way other than being utterly miserable. if nothing is wrong in a southerner's life, they will make something up to be miserable and angsty about. It's a weird cult of eternal victimhood, where everyone from "The North" or "the gub'mint" (usually the same thing) to their neighbors, their pets, their children, their parents, god, and skeeters are all out to "get them." To embrace southern culture is to embrace a fatalistic view of a universe poised in eternal collapse, centered entirely and solely around your person - Southern culture is bad at acknowledging the existence of other people, except as actors in your personal play (where they are inevitably antagonists.) it's like an entire section of the nation reached the age of 16 and decided, that's it, good enough, stopping right here.

Which would be fine, I guess - I mean obviously sucks for the south, but whatever, if you want to leave you can leave - but the damn thing is, southerners keep trying to make the rest of us miserable. Either they're dragging their sixty $%@#-tons of whinge and baggage across a state border, or their sending their sixty $%@#-ton wind-bags to congress to try to legislate the way the rest of us use our genitals, spend our money, do our, ahem, gardening, and arrange our marriages.

So yeah, maybe the happiness of Alaska and Hawaii is due in part to the lack of transient populations - $%@#-baggers from below the mason-dixon line seem to have trouble muddin' their way across the Pacific, and seem to be deathly afraid of catching the socialisms by crossing the canadian border.
edit on 21-2-2015 by TheTengriist because: (no reason given)