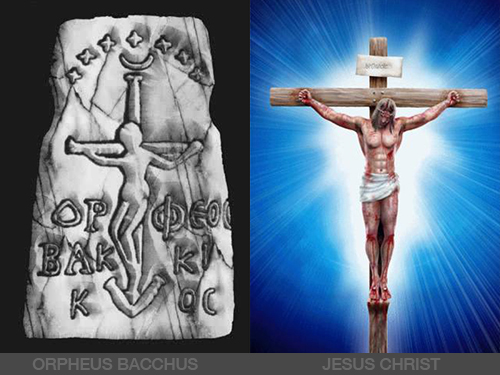 the item on the left is an amulet with the words ‘Orpheus Bacchus’ a pseudonym of 'Osiris-Dionysus'.


“It shows a crucified figure which most people would immediately recognise as Jesus. Yet the Greek words name the figure ‘Orpheus Bacchus’, one of the pseudonyms of Osiris-Dionysus.

"To the author of the book in which we found the picture, this amulet was an anomaly. Who could it possibly have belonged to? Was it a crucified Pagan deity or some sort of Gnostic synthesis of Paganism and Christianity?”


well sure seems to me christianity stole something from the pagans. christianity is a rehash of old european mythology in middle eastern setting.

oh well I guess Orpheus Bacchus also loves us and died for us.

I find the connections between the Jesus, Paul fabricated, and the ancient worship of Mithras, are too many to be mere coincidences.

originally posted by: Klassified
a reply to: rokkuman

I cited the source itself in the op - T. Freke & P. Gandy “The Jesus Mysteries”


I composed the picture of the orpheus and jesus. you could type in 'orpheus bacchus' in google image search.

Nothing was stolen. It just looks that way because the Christ permeates world religion and myth. Even our modern space-age myth.

"Further statements by Christ, the Magi, and even God himself reinforce this conception of Christ's boundless revelation throughout the world.

In sum, the Revelation of the Magi contends that Christ is actually the hidden source of all or most of humanity's religious systems. Therefore, according to this text, non-Christian religions do not actually exist, since Christ pervades them all."

The idea of the Christ pervading world religion and myth is compatible with comparative religion scholarship, with esoteric religious thought, and with the notion of Jesus reincarnating throughout the world over the ages.

It's not compatible with exoteric orthodox mainstream thinkers, but so what. Those guys suck.

posted on Feb, 14 2015 @ 08:03 AM
link
a reply to: rokkuman
I know you did. And I'm quite familiar with Orpheus/Bacchus. What I'm after is some data on the origins and dating of the left side of your image. Have you read this book?

ETA: The issue at hand is whether or not this relief actually pre-dates Christianity, and by how much. The followers of Dionysus were still active during Jesus alleged life time. So dating is important on this piece.

originally posted by: Klassified
a reply to: rokkuman
I know you did. And I'm quite familiar with Orpheus/Bacchus. What I'm after is some data on the origins and dating of the left side of your image. Have you read this book?


havent read the book but I most definitely will try and get a copy. I came across the orpheus image and looked it up and thats when I found the "Jesus mysteries" book.

posted on Feb, 14 2015 @ 08:19 AM
link
Very interesting but not really surprising, Christianity is a mongrel of a religion made up of countless other dead religions, cults and superstitions.


This is a documentary of the same name, but I don't know how much it has to do with the book. It came up in a search for that image, which, by the way...


Featured prominently on the cover of Timothy Freke and Peter Gandy’s controversial 1999 book The Jesus Mysteries: Was the “Original Jesus” a Pagan God? is a ring-seal amulet once housed in a museum in Berlin (Figure 1). Unfortunately this interesting artifact was lost during World War II. The image on the amulet is that of a crucified figure and its inscription clearly reads Orpheus Bacchus. The authors “came across a small picture [of the ring-seal] tucked away in the appendices of an old academic book.” The ring-seal amulet is supposed to be the smoking gun that proves their point that Jesus, Dionysus, Hercules, Mithraism, Osiris and others are all basically the same god-man archetype in the Jungian tradition.

posted on Feb, 14 2015 @ 08:30 AM
link
There isn't much information i can find on the relic...only a short Wikipedia excerpt and an article. The excerpt from Wikipedia states that the 'Orpheos Bakkikos' relic could either be an early Christian piece with Greek themes or a (early) modern forgery. It's been lost since WWII, so no one knows its true origins.

The Orpheos Bakkikos crucifixion. This hematite seal is thought by some to date from the early Christian era and reflect ancient Greek themes; others consider it a modern or early modern forgery. Formerly housed at the Altes Museum in Berlin, it was lost or destroyed during World War II.

Further information can be found in this article, although i am yet to look through it:

Please please could you stop using one "denomination" as the whole of Christianity.

Personally, I don't use them any longer as a sign that I was a Christian and I have never used the crucifix.

posted on Feb, 14 2015 @ 09:43 AM
link
Bacchus and Jesus share a lot of similarities. I did a thread on this topic a while back pertaining to Da Vinci's painting of John the Baptist in the wilderness.

everything comes from everything.

it is not much of a point to say that one group using similar items or thought tools that another group used is stealing or copy cat.

look at how many salads all have lettuce in them

posted on Feb, 14 2015 @ 02:11 PM
link
I have the book and have read it a couple of times. If I can remember correctly there were Jewish gnostics and Jesus was their version of the god man myth. There are the outer mysteries and the inner mysteries. The outer mysteries are for the beginners. The story had hidden meaning so had to be taught so people could get to the inner mysteries. But somewhere along the line people began taking the story literary as fact. Those literalist started killing off the gnostics and destroyed all the books as well. Now fast forward to today we have been taught the Jesus story as fact. Lost are the inner mysteries. That is the summary of the book. The second time reading it was better because of reading other things and saw how it fit in with the puzzle. One little note in the book the fish symbol was part of over lapping circles and it was called the measure of the fish. Mathematics seem to be part of the mystery. I recommend the book.

it was destroyed years ago so theres no telling if it was a forgery or not.