Did anybody else feel a quake this morning?

posted on Feb, 7 2015 @ 06:33 PM
link
I'm on the East Coast of NC and this morning at some time between 11:00 AM and noon I felt two small quakes. I'm afraid to call them earthquakes because we barely ever feel those, and when we do the epicenter is usually farther away, and I can't find any info on an earthquake earlier today anywhere nearby.

There was a slight rumbling noise when it was happening as well, and it only lasted a few second. I felt the entire house shake and my computer monitor was wobbling up and down from it. About 10-15 minutes later it happened again, a little worse than the first time but lasted about the same amount of time, and there was a rumbling noise during this one as well.

It was not a truck or anything going by; although I'm close to the highway and a bridge and occasionally hear and feel heavy trucks crossing the bridge, they all sound like... well... trucks. This didn't sound anything like a truck... more like a low-pitch jet engine but it sounded far away. I do live somewhat close by to an airforce bombing-range, and when the wind is right I can occasionally hear jets and bombs, but I never usually "feel" them, let alone have anything noticeably shaking from it, but this was much much different than anything I've felt and heard before.
edit on 7-2-2015 by Aldakoopa because: (no reason given)

posted on Feb, 7 2015 @ 06:54 PM
link
That's funny, I live on the East Coast of Canada, and this morning I had a funny imperceptably wobbly feeling.
I just paused for moment and thought it must be nothing.

It made me pause.

Maybe my subconscience was noticing something different?

You may have hit the nail on the head regarding the bombing range. You never know what they're up to. If I find out anything about it I'll let you know.

posted on Feb, 7 2015 @ 09:51 PM
link
I also looked on the USGS site and couldn't find anything in your area. But in looking at the USGS Heliplot from NC is does appear to my untrained eye that something was happening around that time. 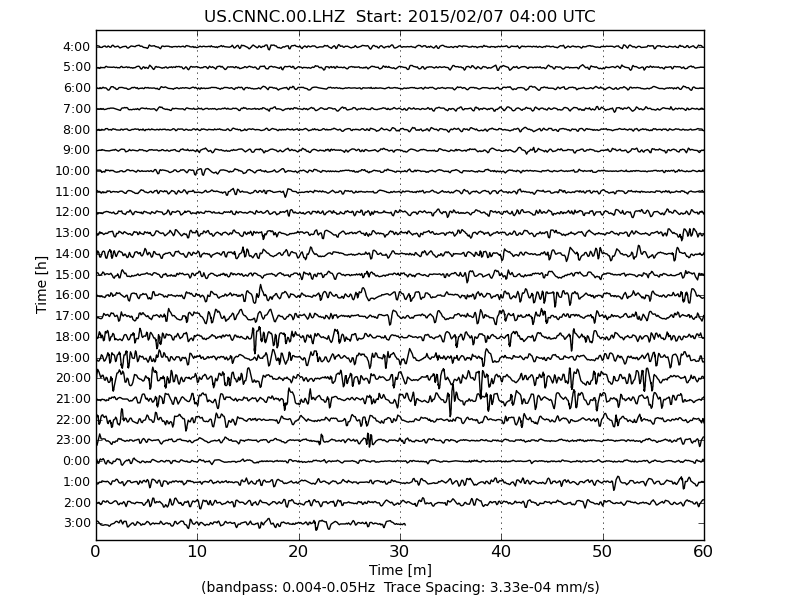 Could it have been the USAF testing a few large bunker-buster in preparation for an attack on ISIS?

I think ISIS will likely feel exactly the same way!