Bizarre doughnuts on a rope contrail over Nevada 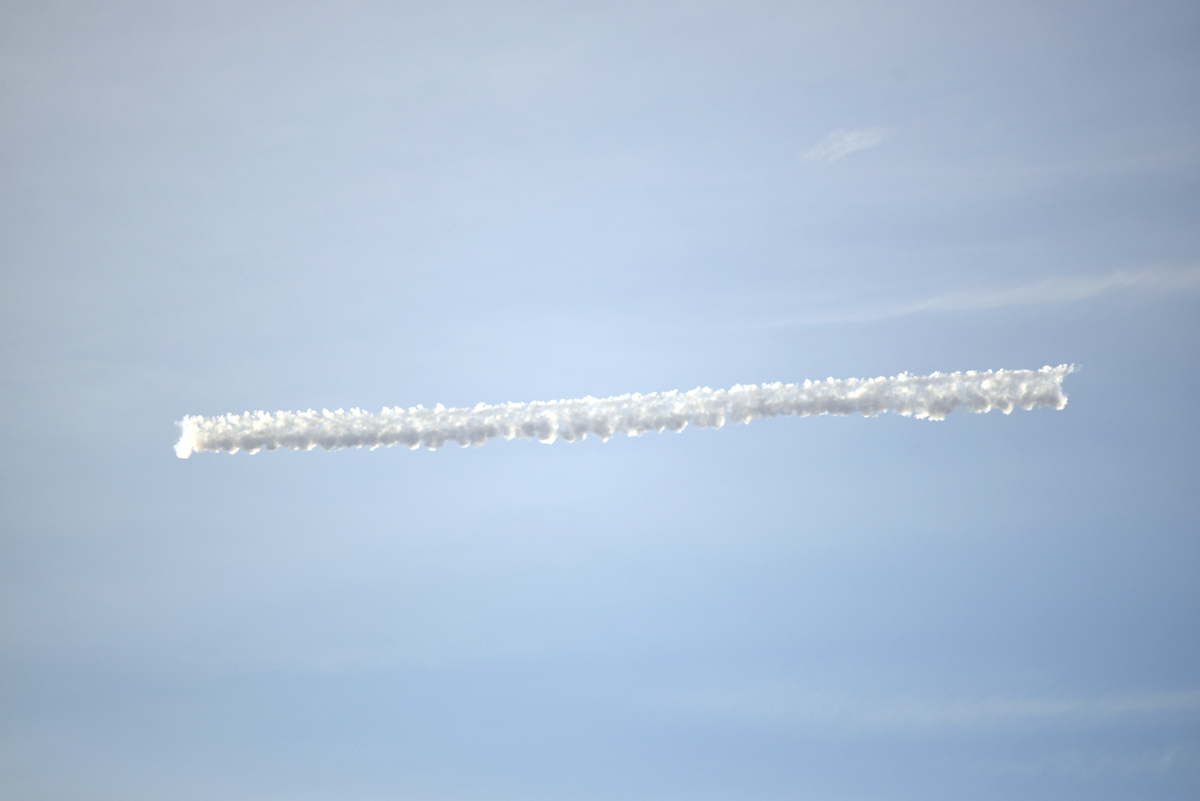 was sent to George Knapp a couple weeks ago and George sent it to me asking for my opinion on it. He also asked me not to do anything with until he had a chance to use it in a piece he did for his station Channel 8 in Las Vegas (don't let the chemtrail stuff distract you, I'm interested in this weird contrail) if you watch the video you'll see George interview the guy who took the picture:


So now that you know the history behind this image I'd love to get our resident Aircraft Experts' take on what sort of an engine you think could have caused such a weird contrail?

Could this have been a short fire test of new scram-jet that has really high pulse frequency? Could that explain why the "doughnuts" are so tightly packed on the "rope"? It's been a long time since I really dug into the nuts and bolts of scram-jet technology so I'm sure there have been massive improvements and alterations I am unaware of but, damn, that's a weird looking trail!

My best guess on the abrupt start/stop of the contrail is the that the plane could have been brought up to the test altitude by a carrier craft, released, the engine fired, then shut down and the test craft simply flew away under non scram power leaving no contrail.

Does that sound reasonable? Does anyone have any knowledge of a setup like that for a new scram-jet, or, something completely new and different and not a scram-jet at all?

I've been following scram-jets in various articles that appear the AIAA's "Aerospace America" over the last several years and I know they have achieved extremely high mach speeds for several minutes in a few of the test beds. That said, I can't imagine how you'd end up with something like this trail from one of those known test beds based on the images of the trails I've seen coming from them, they just don't look like this.

I think the guy in Nevada just might have captured the evidence of something new and probably very secret which is beyond cool all by itself.

"donuts on a rope"

makes me think of a pulse implosion propulsion system, they've been experimenting with that for a Long time.

Honestly Springer that looks photochopped to me. Now i havent watched the videos or read the story yet, I'm about to, but just a first impression of the image.

I just googled scram jet contrails and a lot of strikingly similar images popped up. Nothing really as tight as your image so yeah, could be something new.

Based on other discussions, it may be the Aurora:

www.abovetopsecret.com...
PROJECT AURORA EPIC CONTRAIL - ANYONE GIVE ME SOME EVIDENCE ...

www.abovetopsecret.com...
DONUTS ON A ROPE?

www.abovetopsecret.com...
DONUT ON A ROPE CONTRAILS, THE PHYSICS PRECLUDES AUROA?

Or maybe it's a Pulse Wave Detonation:

www.abovetopsecret.com...
ANOTHER MISSILE CONTRAIL OVER OAKLAND CA ON 11/4/10

(Another new discussion today said ash is falling over Washington and Oregon. Did something blow up?)

I've seen donuts on a rope many times with nothing but commercial aircraft in the area.

posted on Feb, 7 2015 @ 12:36 PM
link
Could be a high frequency pulse detonation jet engine as the doughnuts are very tightly packed together and they have been around for a long time, but I'm pretty sure atmospheric conditions can cause the same thing with conventional Jet engines as Zaphod said

BTW, I'm no expert but I'll have a stab at answering the question anyway

This reminds me of a low flying bomber I seen billowing white arisol from all 8 engines and all of a sudden all smoke stopped from all engines for about 300 yards ,then started up again . It was no doubt spaying and a tank run dry and during the selinoid switching there was a brief gap in the trails.The engines did not change pitch and had nothing to do with fuel.
edit on 7-2-2015 by supergravity because: (no reason given)

Here is my pic that I don't have an explanation for: 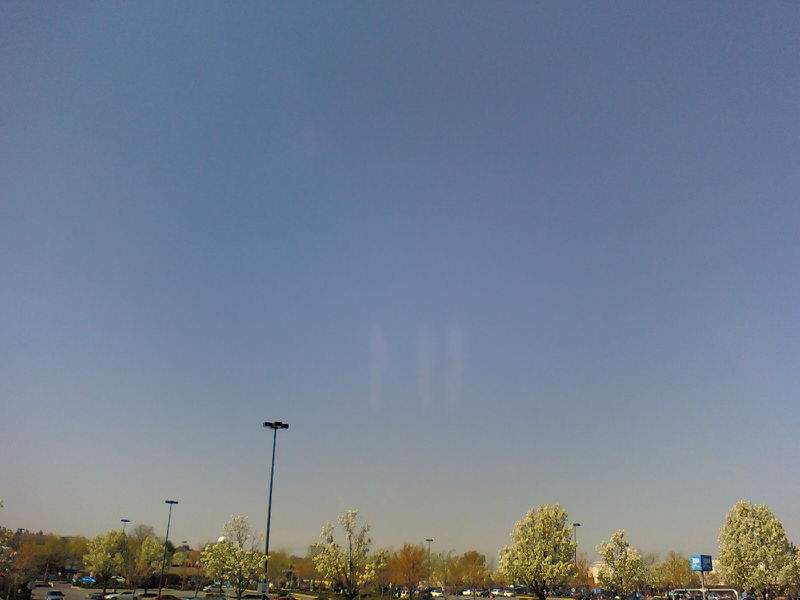 posted on Feb, 7 2015 @ 01:36 PM
link
Certain atmospheric conditions can do some weird stuff to otherwise conventional con-trails.
This particular trail could have been created by an aircraft that was either steeply climbing or descending through an atmospheric layer that would be conducive to producing con-trails, giving it that distinct start/stop effect.
Another possible explanation is an engine issue with one of the many military aircraft that were in the area from Red Flag. Maybe an engine flame out then re-start causing a vapor trail behind the aircraft far a short distance.

" donuts on a rope" was coined when talking about a pulse detonation drive.

Thus was believed to be the drive of the fabled "Aurora" aircraft. 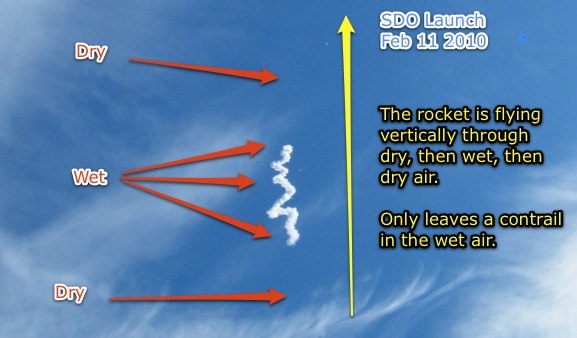 Just a normal contrail, left by a flight passing through different air layers.

By the way, in 2004 the X-43A scramjet flew under power for approximately 11 seconds.
It traveled more than 24 km in those 11 seconds, so i'd expect a way more long contrail for any scramjet powered craft, if it were the case.

Moreover, scramjet don't really leave "donuts on a rope". Maybe pulsejet do, but as Zaph already wrote, even normal planes can sometime make those contrails.

If i'm not mistaken it's called Crow instability.

So, no.
Nothing out of the ordinary.

The only thing is that most of those are normal contrails that people mistake for scramjet/pulsejet contrails. Any jet engine can leave contrails like that if the conditions are right.

I'm fairly ignorant in the realm of aviation.

One of the things about being a truck driver is that I see a few dozen contrails a day.

I don't think it was very high at all (which lends itself to the engine test theory IMO) based on the witness/shooter's comments in the video.

Am I misusing the word "scram-jet"? The last "Aerospace America" article I read on them indicated they are using super high frequency "pulse" explosions with naturally aspirated engines (versus rockets) to achieve super high speeds. Am I confusing two different things?

WRT the "doughnuts on a rope" I realize any jet operating in the right environmental conditions could create one, but I've never seen anything like this and suspect this was a test of something new. Take into account the sky this was photographed in (the busiest for classified new tech in aircraft that I know of) and I think we've got something special...

Or it could be another Malaysia airliner having flatulence right before it disappears.

posted on Feb, 7 2015 @ 04:53 PM
link
One thing about the PDE/PDWE is that they're terribly inefficient for anything larger than a cruise missile sized platform. They'll work on larger platforms, but not well. The best I heard for a medium sized platform is just over mach 2.

Sort of. A true scramjet operates just like a ramjet, with no moving parts. The difference comes in how it uses the airflow through the intake.

A ramjet slows the air to subsonic speeds before compressing it, mixing it with the fuel mix, and igniting it. A scramjet operates basically the same way, except it takes in supersonic air and uses the higher speed to compress it.

A pulse detonation engine, or PDE, is the engine that uses rapid detonations to create propulsion. A PDE/PDWE has similarities to a ramjet/scramjet but it usually uses an enclosed system, not an intake/exhaust system.
edit on 2/7/2015 by Zaphod58 because: (no reason given)