posted on Feb, 3 2015 @ 06:12 AM
link
According to an article at phys.org, researchers were able to measure the 4D states of photons. This test, they say, ruled out the theory that the thought experiments conclusion resulted from a local limited knowledge of wavefunction.

A bit of background, Schrodingers cat was a thought experiment in quantum physics conducted by Erwin (I believe!) Schrodinger. I won't write up the full theory, but the result was that the cat was both alive and dead.

These researchers believe this may eventually lead to breakthroughs in superposition, objective reality understanding and better understanding of quantum waveform.

Very great read! For those not familiar with SC thought experiment, Wikipedia has a great article.

I imagine it has something or other to do with superposition.

I can't wait til we have another few decades of QP under our belts (as a species).

I've always wondered how the local position is "chosen." I am by no means an expert on QP, but more of a student, so to speak. Trying to learn as much as possible on this amazing subject!

So they decided the answer was "maybe yes, and maybe no"
One good thing about a "thought experiment," you can always change your mind.

I cant claim to have much of an understanding of the subject ether. I was however lead to believe that direct measurement or observation influences the out come of the experiment. To me that seems like magic, certainly suggests that our perspective can have a direct influence regrading things that exist at the quantum level.
edit on 3-2-2015 by andy06shake because: (no reason given)

posted on Feb, 3 2015 @ 06:48 AM
link
It's fascinating to read some physicists' theories of probable dimensional and vibrational reality/unreality, or I-not/I.


When something is learned there is then resonance between the parts. In true associationism (including stimulus-response) new wholes are formed. The greater the whole---containing more inherent parts---the higher the frequencies and dimensions (for example, 3D to 4D).

Thus our 3rd dimension is a manifestation of different fractal levels of wholeness and frequency along the gradient 3D to 4D impinging into 3D. Interaction of one frequency with another, say, higher-frequency wholeness (a fractal level and wave function) will quantum reduce the greater whole to the lesser whole. There is a break down (Fourier analysis) of the greater whole and its frequencies to lesser frequencies. This is now at an acceptable informational level.

I think that logic alone will lead you to the same conclusions: either it is all real, and within the "forces"/"potentiality"/spirit/will/desire, or nothing is real; and nothing isn't real, therefor it is [real] (the cat is in both states).

Yet still, even nothing exists, and it is simply ill-defined. What nothing actually is, is the inability to see, or the desire to not see, or say, what is; and so nothing is not a qualifier for the cat, but instead, the observer/the measure-er. That is, "nothing" is not a sum relative to the "potentiality" of the cat's state, but of the observers, and so the question would be ill-defined / the potential would be irrelevant to the question -- it would be the same as asking: "is he alive or unaware of certain sensory information (incognizant)."
edit on 2/3/2015 by Bleeeeep because: I had to reword that soo many times - hopefully I made it clear enough.

originally posted by: JBurns
According to an article at phys.org, researchers were able to measure the 4D states of photons. This test, they say, ruled out the theory that the thought experiments conclusion resulted from a local limited knowledge of wavefunction.

A bit of background, Schrodingers cat was a thought experiment in quantum physics conducted by Erwin (I believe!) Schrodinger. I won't write up the full theory, but the result was that the cat was both alive and dead.
JB

WRONG! And the number of physicists who get this spectacularily wrong is frightening. The whole point of the thought experiment was to show that the assumption that a particle was in multiple states until "observed" was wrong. This all depends on the so called wave function which is basically a combination of multiple properties of a particle each of which is described by a probability function.

Now the DUH bit. Clearly the various properties of a particle cannot be known until observed and thus before they are known the probability of multiple states is not zero and , you might have read this, a particle can be "here" or at the end of the known universe!

This is wrong, imho, the maths is merely showing the result of not knowing everything ! and being probability based then the probability of absolutely everything is never zero leading to some quite wacky interpretations.

The cat is either dead or alive. The "unknown" particle is in a single state which begs the question : what about the so called quantum computer and it's qubits that has been built , supposedly, but nobody knows what's inside. I have a sneaking suspicion that a qubit is a multi state bit (as opposed to binary) in which case the ternary logic (as opposed to two state boolean) gets very hairy. But it would make for a faster more compact CPU.

Wellllllll, nice work. You've killed the thread with your clever explanations wise guy - maybe. I honestly don't know much about the subject but i find it interesting and I believe I can see what you're putting down, although I haven't seen the maths you speak of and don't intend to view them. Keep up the good work though, yorkshirelad and Jburns its a fun read.

Your take is that information is changed while in the wave function, and it was never reduced to a true state of probability?

Classical mechanic action (cause and effect) within the wave function?

But then what is change and where does it come from? What is the source of change, if all things do not exist within a probability wave/wave function?

Where do you go from where you're at?

I always believed entropy was responsible for some measure of change/decay, at least in a closed system considering it must increase. But who knows what goes on at the quantum level? The laws regarding reality seem to be rather pliable down there amongst the quantum foam so i imagine thermodynamics is as interchangeable as the rest.
edit on 3-2-2015 by andy06shake because: (no reason given)

This is why I like many worlds. Is the cat not an observer? Make it about the cat getting shocked instead of killed, for simplicity. In the cat's world, it either got shocked or did not, and it observe it. However we won't know if the cat got shocked until we open the box, and see it relaxed or not. So after that point, the cat is in universe B for example (where it got shocked) but the observer is in a superposition of A and B, which are exactly the same until observing. You can do that same experiment with a human, the human will know if it got shocked or not, but we outside don't know until we talk to him, or in other words, the human will know which path he took in the multiverse, but we won't know until later.

The alternative puts us in this state where everything - including whether other people were shocked or not, alive or dead , is dependent on this one person called "the observer". That's too silly for me.

originally posted by: tridentblue
That's too silly for me.

I haven't ruled out any idea in QM because it sounds "silly", but can you honestly say the idea of near infinite or infinite number of universes existing, for which you have no real evidence is less silly? It seems at least as silly, if not more silly, though that doesn't necessarily make the idea wrong. I try to keep an open mind and let the evidence lead to which interpretation of QM is correct.

While we've made a little progress since Schrodinger first formulated this thought experiment, and maybe the research mentioned in the OP has added or will add a tad more progress, we still seem to be far from verifying which of the competing interpretations are most likely to be correct, or perhaps the correct interpretation is one we haven't thought of yet.

Decoherence theory gives us part of the answer to the cat thought experiment, but it still leaves unanswered questions which hopefully further research like that mentioned in the OP and other research will help answer:


Decoherence shows how a macroscopic system interacting with a lot of microscopic systems (e.g. collisions with air molecules or photons) moves from being in a pure quantum state—which in general will be a coherent superposition (see Schrödinger's cat)—to being in an incoherent mixture of these states. The weighting of each outcome in the mixture in case of measurement is exactly that which gives the probabilities of the different results of such a measurement.

Nobody is really advocating killing cats in experiments, but your substitution of "shock" doesn't seem to work. When you open the box you can't tell if the cat was shocked or not. I'd suggest sticking to Schrodinger's thought experiment, or else Einstein's variation where the decay triggered a bomb which exploded the cat, so in that case you don't even have to check its pulse to see if it's really dead.

It doesn't mean that Schroedinger's cat (as an actual cat) is alive or dead.

It means that small quantum systems really can be in a state of superposition, as all other experiment has suggested, and the time evolution of the wave function in the Hilbert space really is the objective reality of physical world.

Back to Schroedinger's cat----the superposed state probably exists but only for an infinitesimal amount of time until physical processes make one or the other final state probable and not some superposition. More is different.

Quantum mechanics is regular physics, but in a bizarre functional space!
edit on 3-2-2015 by mbkennel because: (no reason given)

This is all I could think of after reading the article. 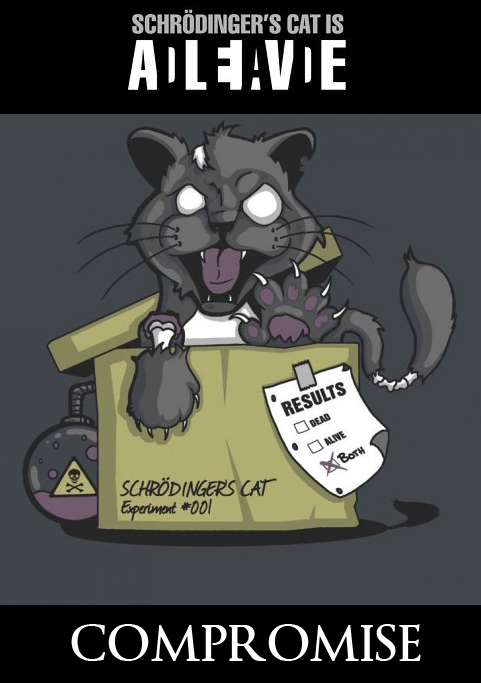 posted on Feb, 4 2015 @ 09:53 AM
link
Sounds like the university PR department working overtime to me. Seriously.


Einstein's 4D gravity well/time-space vortex makes me wonder if all matter, including (if we accept) conscious thought and observation as a type of matter, distort space-time by creating a vortex which would interract with other observed and unobserved vortices?
edit on 4-2-2015 by InTheLight because: (no reason given)

As I stated above, I visualize in my mind the quantum waves and particles within gravitational vortices' interaction at play, and if we are to believe that certain atoms do travel along a 4D plane within their 4D vortex-based orbit, whereupon they seem to materialize or jump to a different location, could it be the interaction of the introduced vortex (observer, other matter) cause the waves and/or particles to distort time - hence an observed particle seeming to be in two places at once, or actually being in two places at once?