posted on Feb, 1 2015 @ 08:28 PM
link
After reading this bull snip. My blood was literally boiling. More G'damn Kenysian economics. I guess spending 8 trillion dollars in the last 6 years wasn't enough for the fraudster in chief. Another dose of stupid only getting more stupid.

Forget the fact the $787 BILLION Stimulus Plan that was a colossal waste of taxpayer dollars. That did not deliver a G'damn thing.

Those champagne wishes, and caviar schemes. That do absolutely nothing, but line the pockets of special interests. In this case unions will be the first, and foremost beneficiary. As nothing is built in this country without it being union. Especially so when it comes to construction projects.

Which take decades to build, and cost billions in overruns.

Read it, and weep.

Now mind you this is on top of the already $ 787 billion dollars spent on 'shovel ready' bull snip.

Now mind you this is already on top of the tax hikes that have been levied on the evil rich.

That's not all folks.

Here's where it really gets stupid, and a clear over reach of governmental power.


Half of that money would come from a one-time mandatory tax on profits that U.S. companies have amassed overseas, according to White House officials who spoke on condition of anonymity before the budget was released.

They have no authority to take money from US companies overseas. NONE.

If you don't get that ? It is as simple as saying California has the right to New York's companies profit's.

This so called budget is suppose to be supported by 3.5 trillion in tax revenue. Still leaves a deficit.

So spend more money we don't have. Take half of them evil corporations profits. When all they have to do is pick up, and leave all together.

Now let's not forget we have already had a first round of this stupidity in 2009 without a damn thing to show for it. Now we are looking at $1.2 trillion.

And still will have nothing to show for it.

If at first you don't succeed ?

Half of that money would come from a one-time mandatory tax on profits that U.S. companies have amassed overseas, according to White House officials who spoke on condition of anonymity before the budget was released.


Sounds like a way to get taxes from these companies that call themselves American but move their headquarters overseas to avoid paying taxes. We should come up with a new import tax for these companies. They want to use America to build their companies up but when it comes to helping the nation through paying taxes they say screw America well it's time to screw them instead.

I am a company. My manufacturing is out side of this country, The majority of my revenue comes from outside the country.

And you think the US government has any 'right' to that ?

We are sitting on a timebomb with our overtaxed, ready to blow power grid.

THAT is a matter of national security. 2 years lead time to replace transformers. An EMP will collapse this nation yet we do nothing.

We don't even build this crap in the US anymore. Insane.

That is a public works program that needs to happen.

Nothing this man does shocks me anymore. He added a tax on my wife's life insurance. Yeah you read that right.
He taxed the "economic value" of life insurance...

First it was SS.

Then it was medicare.

Then it was medicaid.

Then it was food stamps.

Then it was education.

Then it was homes.

The infrastructure is 'bad'.

Something had to give.

And there is no amount of money that is going to fix what took DECADES To build.

Then by the time it gets done.

It will be time to do it all over again.

posted on Feb, 1 2015 @ 09:25 PM
link
And this is the other shoe dropping. What we have here is the trade-off for the pipeline. A deal more or less confirmed at the State of the Union Address: www.abovetopsecret.com...

Here was the first shoe: www.abovetopsecret.com...

Personally I hope every cent is approved. The U.S. needs massive infrastructure repair, needs to hire people to work on those repairs, and this money will be spread around into win-win public works projects which are timely, useful, and good for both the American public and its private industry economic backbone.

To quote Hitchhickers Guide to the Galaxy, this sounds like a "Thanks for all the fish" moment. Obama has to pay off his corporate supporters maybe? I mean seriously, screw the people! On the tax increases, watch for the corporate migration. There'll be a sign somewhere that says, "Last businessman out, please turn off lights."

Good. Not high enough for what needs to be done. It's a good number to start with though.

If it worked for the national parks and the highway system, it can work for fixing that and building on it. Serious, sustainable job creation.

Except it's not sustainable. The government is flat broke and has to get the money from somewhere. Where do you propose they steal the money from? Or should they just print it out of thin air.

Also, when the infrastructure is refurbished, the jobs aren't needed anymore and done. Or do you propose they just keep developing forever? China has built entire cities no one lives in following that tactic, and China has a massive public debt problem.

originally posted by: neo96
a reply to: buster2010

I am a company. My manufacturing is out side of this country, The majority of my revenue comes from outside the country.

And you think the US government has any 'right' to that ?

Do you call yourself an American company? If you do then pay up or start calling yourself a foreign company.


Do you call yourself an American company? If you do then pay up or start calling yourself a foreign company.

Think you own me?

Or the fruits of my labor ?

Nah, we should just let the bridges collapse, the water lines, collapse, the roads get rocked instead of propely maintained, let the power lines fry, etc.

It is better than giving the money to the bankers.

We need infrastructure to stay afloat.

We are broke yes, but at least it will create jobs here at home.

posted on Feb, 1 2015 @ 10:31 PM
link
Well at least this drop in the ocean is being spent on the people and not on weapons of war , how about throwing in a few billion on solar energy , 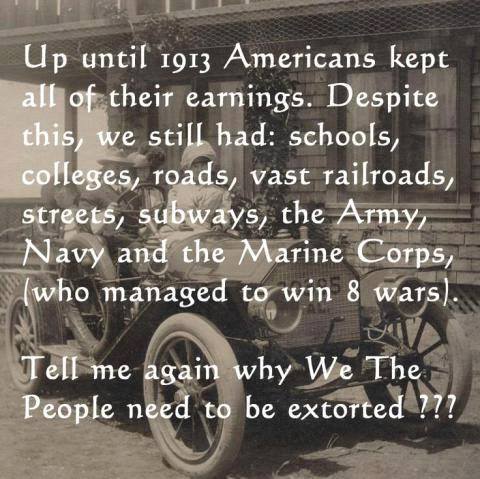 So much for the civil liberties of them evil rich folks.

What GD bill of rights.

The property rights of the minority

Are subject to the whims of the majority.

posted on Feb, 1 2015 @ 11:05 PM
link
The government should have been planning the funding for infrastructure improvements long before now. These patch work, pothole Charlie, quick fix repairs can only go so far. Irresponsible and no foresight, just kicking the can down the road. It was great when these huge projects were undertaken, but we no longer have the greatness to maintain them.

the $787 BILLION Stimulus Plan that was a colossal waste of taxpayer dollars. That did not deliver a G'damn thing

Of course you don't care if people have jobs or not, you only care if you can save a few bucks so you can shoot some more tin cans or whatever low-life crap you do care about.

This thread is a nice example of just how right he was.

Liberty and democracy are eternal enemies, and every one knows it who has ever given any sober reflection to the matter. A democratic state may profess to venerate the name, and even pass laws making it officially sacred, but it simply cannot tolerate the thing. In order to keep any coherence in the governmental process, to prevent the wildest anarchy in thought and act, the government must put limits upon the free play of opinion. In part, it can reach that end by mere propaganda, by the bald force of its authority — that is, by making certain doctrines officially infamous. But in part it must resort to force, i.e., to law. One of the main purposes of laws in a democratic society is to put burdens upon intelligence and reduce it to impotence. Ostensibly, their aim is to penalize anti-social acts; actually their aim is to penalize heretical opinions. At least ninety-five Americans out of every 100 believe that this process is honest and even laudable; it is practically impossible to convince them that there is anything evil in it. In other words, they cannot grasp the concept of liberty. Always they condition it with the doctrine that the state, i.e., the majority, has a sort of right of eminent domain in acts, and even in ideas — that it is perfectly free, whenever it is so disposed, to forbid a man to say what he honestly believes. Whenever his notions show signs of becoming "dangerous," ie, of being heard and attended to, it exercises that prerogative. And the overwhelming majority of citizens believe in supporting it in the outrage. Including especially the Liberals, who pretend — and often quite honestly believe — that they are hot for liberty. They never really are. Deep down in their hearts they know, as good democrats, that liberty would be fatal to democracy — that a government based upon shifting and irrational opinion must keep it within bounds or run a constant risk of disaster. They themselves, as a practical matter, advocate only certain narrow kinds of liberty — liberty, that is, for the persons they happen to favor. The rights of other persons do not seem to interest them. If a law were passed tomorrow taking away the property of a large group of presumably well-to-do persons — say, bondholders of the railroads — without compensation and without even colorable reason, they would not oppose it; they would be in favor of it. The liberty to have and hold property is not one they recognize. They believe only in the liberty to envy, hate and loot the man who has it.