posted on Feb, 1 2015 @ 11:15 AM
link
Perhaps one of the Strangest yet needed inventions in keeping the populace happy with the Religious leaders was machine #37 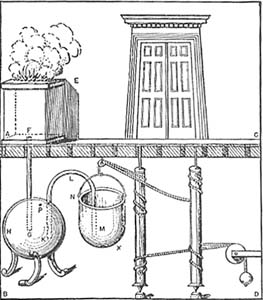 This device used heat and pneumatics to open a set of temple doors. To open the doors, the priest lit a fire on the altar, heating the air within and causing it to expand. This expansion in volume forced water out of the sphere and into the bucket, which moved downwards under the extra weight. This bucket was connected to a rope coiled around a spindle and, as the bucket moved downwards, this spindle revolved, making the doors open.

A short Video on this Magical invention.

Religion was just as much a Theatre production back then as it is now. Perhaps even more in the past?

posted on Feb, 1 2015 @ 11:32 AM
link
Perhaps the pyramids were built using something similar? Probably not, there are valley of the kings paintings showing large formations of men with ropes and large lumps of stone...

You know what was said about using nuclear energy to spin turbines to produce electricity" "'Hell of a way to boil water."
I think this device beats even that folly.

posted on Feb, 1 2015 @ 11:56 PM
link
After seeing this thread I got to digging around on youtube to see what else I could find. Here's another video of another of his inventions. To call the man a genius would be an understatement. He certainly was ahead of his time.

Agreed! He really was genius..The man invented the first steam engine! Although it was not used for propulsion purposes.

posted on Feb, 2 2015 @ 06:38 AM
link
I appreciate the mechanical action at play, and can understand the use of tricking the populace into thinking the doors opening was an act of god, but I've got to ask: why not just have a few guys down in the basement opening the doors themselves? Keeping the truth hushed up would be important, so you would want as few people as possible to know that the doors open via a secret mechanism, but even with this fire/water method some people are still going to know. You need people to build the underground room and equipment, someone to maintain it and replace the water as it evaporates, repair ropes, leaks in the pressure vessel, and lubricate pulleys, etc.

So if you are already letting several people in on the secret, why not just have them open the doors themselves and do away with all the other equipment?