posted on Jan, 30 2015 @ 12:22 PM
link
It has long been known that the civilizations of mesoamerica and the southwest us were affected by a series of droughts. Between the sixth and 12 centuries several major droughts brought many civilizations to their knees, the various pre pueblo and puebloan societies were dramatically affected, as were the major city states of central america.
The maya of the central america sacrificed to the rain god chaac at many sites


It's not much, but to me any Mayan history is nice reading and learning, and sharing it with the members here is a must.

Enjoy the article, there is a short drone video of the temple inside, i couldn't find the Youtube version (high volume) .


Nestled in a quiet forest in Belize, a deep aquamarine pool holds ruins from a time when the ancient Maya turned to a "drought cult," archaeologists suggest, and hurried sacrifices to a water god to try to stave off the fall of their civilization.

At the Cara Blanca site in Belize, archaeologists report the discovery of a water temple complex: a small plaza holding the collapsed remnants of a lodge and two smaller structures. The main structure rests beside a deep pool where pilgrims offered sacrifices to the Maya water god, and perhaps also to the demons of the underworld.


www.abovetopsecret.com...
A newly released study show the affects of the droughts on the ancient mexican city of Cantona, pop. 90,000, about ninety miles east of mexico city.

A University of California, Berkeley, study sheds new light on this question, providing evidence that a prolonged period of below-average rainfall was partly responsible for the abandonment of one such city, Cantona, between A.D. 900 and A.D. 1050.
At its peak, Cantona, located in a dry, volcanic basin (La Cuenca Oriental) east of today's Mexico City, was one of the largest cities in the New World, with 90,000 inhabitants. The area was a major source of obsidian and the city may have played a military role alongside an important trade route from the Veracruz coast into the highlands.
To assess the climate in that area before and after Cantona's collapse, UC Berkeley geographers analyzed sediment cores from a lake located 20 miles south of the former city. They found evidence of a 650-year period of frequent droughts that extended from around A.D. 500 to about A.D. 1150. This was part of a long-term drying trend in highland Mexico that started 2,200 years ago, around 200 B.C. The climate became wetter again in about A.D. 1300, just prior to the rise of the Aztec empire.

Byrne emphasized that the area's typical monsoon weather with wet summers and dry winters did not stop, but was interrupted by frequent short-term droughts, no doubt affecting crops and water supplies. Today the area is close to the northern limit of maize production without irrigation, and would have been particularly vulnerable to drier conditions, he said.
Byrne, a member of the Berkeley Initiative on Global Change Biology (BiGCB) and curator of fossil pollen in the Museum of Paleontology, has studied sediment cores from many lakes in Mexico and California, and is particularly interested in possible links between climate change and human activities.
Nearly 20 years ago, he learned of Cantona and traveled with students to the areas three times to obtain cores from lakes near the site, most of which are maar lakes created by magma explosions. They are deep and often contain undisturbed and regularly layered sediments ideal for chronological studies.
German colleagues cored this particular lake, Aljojuca, in 2007, and Bhattacharya traveled to Potsdam to collect sediment samples. Oxygen isotope ratios in carbonate sediments are correlated with the ratio of precipitation to evaporation and thus indicate aridity. Organic material in the sediments was used for accelerator mass spectroscopy carbon-14 dating.
"We can show that both the growth and decline of the site took place during a time period of frequent drought, which forces us to think in more nuanced ways about how political and social factors interact with environmental factors to cause social and cultural change," Bhattacharya said. "That makes the study particularly interesting."
Bhattacharya noted that more studies are necessary to reconstruct the prehistoric climate of highland Mexico. Such studies could reveal the causes of prehistoric climatic change and whether they were similar to the factors that regulate the region's climate today, such as the El Niño/Southern Oscillation. 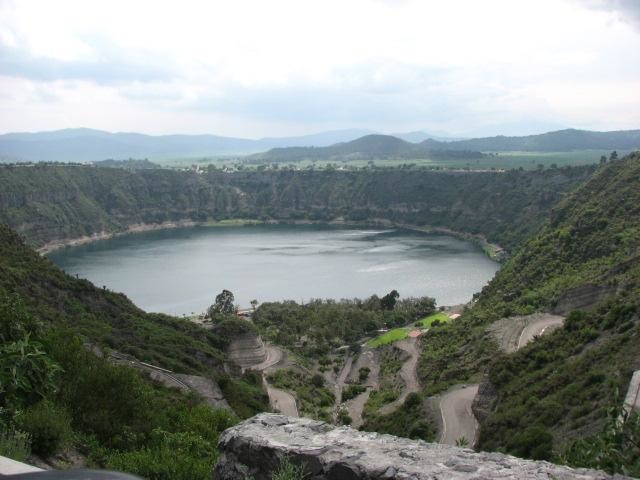 The maar lake Aljojuca, 20 miles south of Cantona, yielded sediments that recorded a lengthy series of droughts between A.D. 500 and 1150 that likely led to the abandonment of Cantona in A.D. 1050.
Credit: Tripti Bhattacharya photo.

and another related story
The city of Cantona 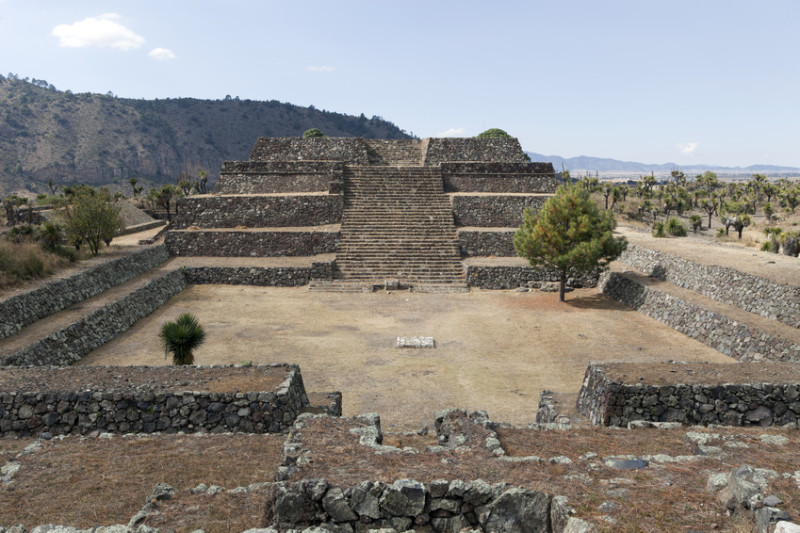 Ruins. Scientists have reconstructed the past climate for the region around Cantona, a large fortified city in highland Mexico, and found the population drastically declined in the past, at least in part because of climate change.

Scientists have reconstructed the past climate for the region around Cantona, a large fortified city in highland Mexico, and found the population drastically declined in the past, at least in part because of climate change
The research appears in the online edition of the Proceedings of the National Academy of Sciences for the week of Jan. 26.
Lawrence Livermore researcher Susan Zimmerman and colleagues analyzed pollen, stable isotopes and elemental concentrations, which serve as proxies of past climatic and environmental conditions from lake sediments in the region and found evidence of a regional drought between 500 and 1150 AD, about the same time Cantona was abandoned.
Using Lawrence Livermore's Center for Accelerator Mass Spectrometry, the team -- consisting of from the University of California, Berkeley; Universidad Nacional Autonóma de Mexico; and the GFZ German Research Center for Geosciences -- dated terrestrial organic material from 12-meter long sediment cores from the lake to establish the age control for this study. Radiocarbon dating and an age model showed that the centennial-scale arid interval between 500 and 1150 was overlaid on a long-term drying trend. The cores cover the last 6,200 years; however, the team focused on the last 3,800 years.
"We found that Cantona's population grew in the initial phases of the drought, but by 1050 AD long-term environmental stress (the drought) contributed to the city's abandonment," Zimmerman and colleagues said. "Our research highlights the interplay of environmental and political factors in past human responses to climate change."
Cantona was one of the largest cities in pre-Columbian Mesoamerica, with a population of 90,000 inhabitants. It is in a semiarid basin east of Mexico City.
The team conducted a subcentennial reconstruction of regional climate by taking sediment samples from a nearby crater lake, Aljojuca. The modern climate of the region suggests that proxy data from the sediments record changes in summer monsoonal (May through October) precipitation.
"Our results suggest that climate change played a contributing role in the site's history," Zimmerman said.

posted on Jan, 30 2015 @ 04:14 PM
link
Large congregations of people can consume vast quantities of water, we don't realize it today because of how efficient modern engineering is in transporting water to our cities, but this was one of the biggest hurdles faced in ancient urban centers. I mean you can see how herculean an effort the Romans put into their aqueducts to bring water to their cities, and that was in a much less arid part of the world. S+F for the post OP.

MEXICO CITY, Dec. 11 (UPI) -- As Mexico City continues to pull water from the aquifer below, its ground is sinking. The process is called subsidence. Now, the city's subsidence can be visualized from the perspective of low Earth orbit.

The European Space Agency has created an ariel composite image -- compiled using satellite imagery collected between October 3 and December 2 -- showing the city's rate of subsidence. Some areas of the city are sinking as much as one inch per month.

The subsidence that results from groundwater extraction is a problem all over the world, but is especially dramatic in Mexico City. The aquifer has been under increasing pressure over the last several decades as the city's population has skyrocketed. Additionally, the city is mostly constructed atop layers of clay and highly permeable sand and gravel -- the type of ground most liable to collapse as water is pulled out.

While subsidence has been stabilized in the city center, many parts of the metropolitan area, as evidenced by ESA's new map, continue to shrink. Some parts have sunk more than 30 feet during the last century.

If these Meso-american cultures burst on the scene, and the natives suddenly had strange reverence for distant stars (and presumably the inhabited worlds orbiting them), then ET teachers were probably at the root of those civilizations. And one of the first things they did or taught (or the people demanded), was how to manipulate the weather to grow more crops, which meant more births and more people putting strains on an artificially-enhanced environment.

Earth has complicated energies and patterns we even now don't completely understand. And manipulating Earth's key energy patterns, means that Earth will eventually reach a point of no return, and start reversing those artificially-enhanced (or manipulated) patterns. So devastating droughts were just the Earth "righting" itself.

Ancient Egypt is thought to have had ET intervention too, and the people probably also pushed for "more rain" for "more crops." Some researchers have found that the base of the Sphinx shows evidence of ancient rain and flooding.

And ... we never seem to learn, although the goals have shifted. Amid all the cries about "global warming," it was discovered in 2013 that university researchers were experimenting with "heating up the ionisphere" in HAARP, Alaska. That HAARP was abruptly shut down in May 2013, and American Drought Levels fell dramatically the rest of the year.