Can anybody explain how this movie scene was filmed?


It looks like a flyover of some kids riding bicycles across a bridge, which could possibly be done with a small plane.

But here's what I find mysterious...in the the soundtrack you can hear the kids laughing and their bicycle tires thumping the uneven wood boards on the bridge, but you can't hear any plane engine noise, not even a muffled sound like you'd get from most noise-cancelling tech I've heard. Here's a screenshot of part of that scene: 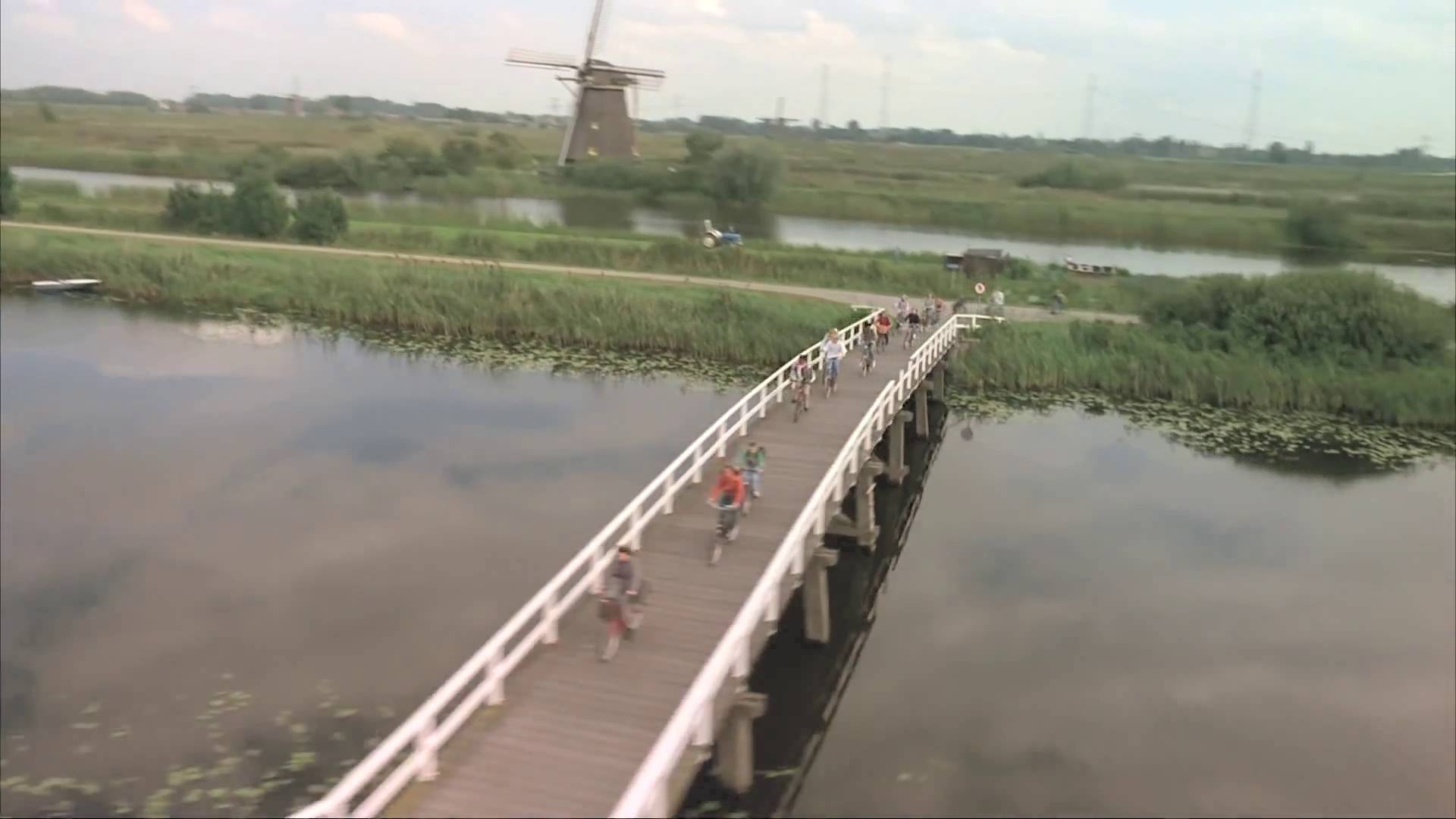 Now I know there's such a thing as noise cancelling technology, but I don't think it's good enough to reduce engine noise to complete silence, is it? Plus if you try to record audio while flying, wouldn't you have wind noise in a case like this?

Then I wondered, what if they used a glider for the flyover? The main problem with that is it seems the elevation ascends after a time, in a location which doesn't look particularly suited for thermals as it's so overcast the bikes don't cast shadows. It flies higher and higher and the scene ends at 5:37.

So my question is, how did they film that?

Could they have done it in a small plane and then faked or dubbed in the sound track of the kids laughing later? If so it really sounds like a genuine soundtrack, I can't tell it's dubbed. Can a small plane make the tight turn it shows near the end of that scene? If anybody knows or has ideas on how they did this, I'd love to know, because I haven't solved the mystery to my satisfaction yet. My attempts to Google for an answer didn't turn up anything useful.


Usually the film has no sound, until it's applied in The Sound Effects Studio.

The sounds of the kids and bike tyres are added afterward.

And maybe they had the kids ride across the bridge a second time to get a clean sound when the plane wasn't flying overhead?

In the next scene when the kids run across the bridge it's all filmed on the ground, but the footsteps of the kids are in perfect sync with the sound, so for that part I think audio and video were probably recorded simultaneously. But they could have been done separately for the flyover scene, I suppose that's how they did it. It's well done.

This will explain how it's done.

posted on Jan, 30 2015 @ 08:11 AM
link
Are you kidding us?
You could not grasp the concept of dubbing?
The other aerial scenes had no engine noises, just the narrator.
Do you think they had the narrator in the plane at the time they did the fly overs?

You had better look into how movies are edited before someone on Youtube pulls a fast one on you. To your detriment.

I doubt the children's audio portion was even recorded on the bridge.
Sound effects.


Alot of times in movies, audio you hear was added after the fact and made to sound like it's actually occurring in real time. There didn't even need to be a microphone at filming.
Watch this video, I saw it the other day in another thread.

a reply to: Arbitrageur

It's actually REALLY easy. I'm a director and own a production company with 12 directors. We do some of the biggest music videos around. It's either a drone or camera mounted on helicopter for the flyover. Now here's what they do for sound...

They don't use the sound from camera when doing a flyover even IF you want plane/helicopter sounds... You still would not use the sound from camera for the actual finished piece. When an edit is being done rough sound effects are put on it and then once it's "picture-locked" aka the edit is pretty much complete, VFX (if used) are popped in and then it goes simultaneously to the finishing jobs like color & sound. Sound has been worked on before this but for the sake of keeping it simple what they do is add sounds that have been recorded specifically for the scene. They get the sound of bikes, laughter, environment, etc. and they put it all together and "mix" it

They don't even use people's real footsteps almost ever. All sound effects dubbed in after. Any good sound recordist grabs room tone/environment sound that is mixed by the engineer doing the sound effects in post. Microphones almost never are from the camera either by the way in anything you watch. Almost across the board it's sound recordists with their own equipment from boom mics to lavs, they get all of the sound in scenes and they get what are called "Wild Audio". Wild audio is when they take sound of something we need in a scene but did not get clean during the take. Say it was a great take but we didn't hear something well enough, they'll get a wild take as safety. They record stuff all day really to make sure we're well taken care of. Slating is how they match up the video/audio, that's the thing they slap right before a take. Sometimes we don't like a line in post and we bring the actor/actress in to do ADR that we end up dubbing into the scene.

posted on Jan, 31 2015 @ 09:05 AM
link
Fun trivia: The Wilhelm Scream
"The Wilhelm scream is a film and television stock sound effect that has been used in more than 300 movies, beginning in 1951 for the film Distant Drums. The scream is often used when someone is shot, falls from a great height, or is thrown from an explosion."
"The effect gained new popularity (its use often becoming an in-joke) after it was used in Star Wars, the Indiana Jones series, Disney cartoons and many other blockbuster films as well as many television programs and video games."