The BlackVault Sued By Fold3 and Ancestry.com

If you need some insight to what happened, check out Sheperd Johnson's corrective and the Washington Post's redux or the analysis here on ATS. 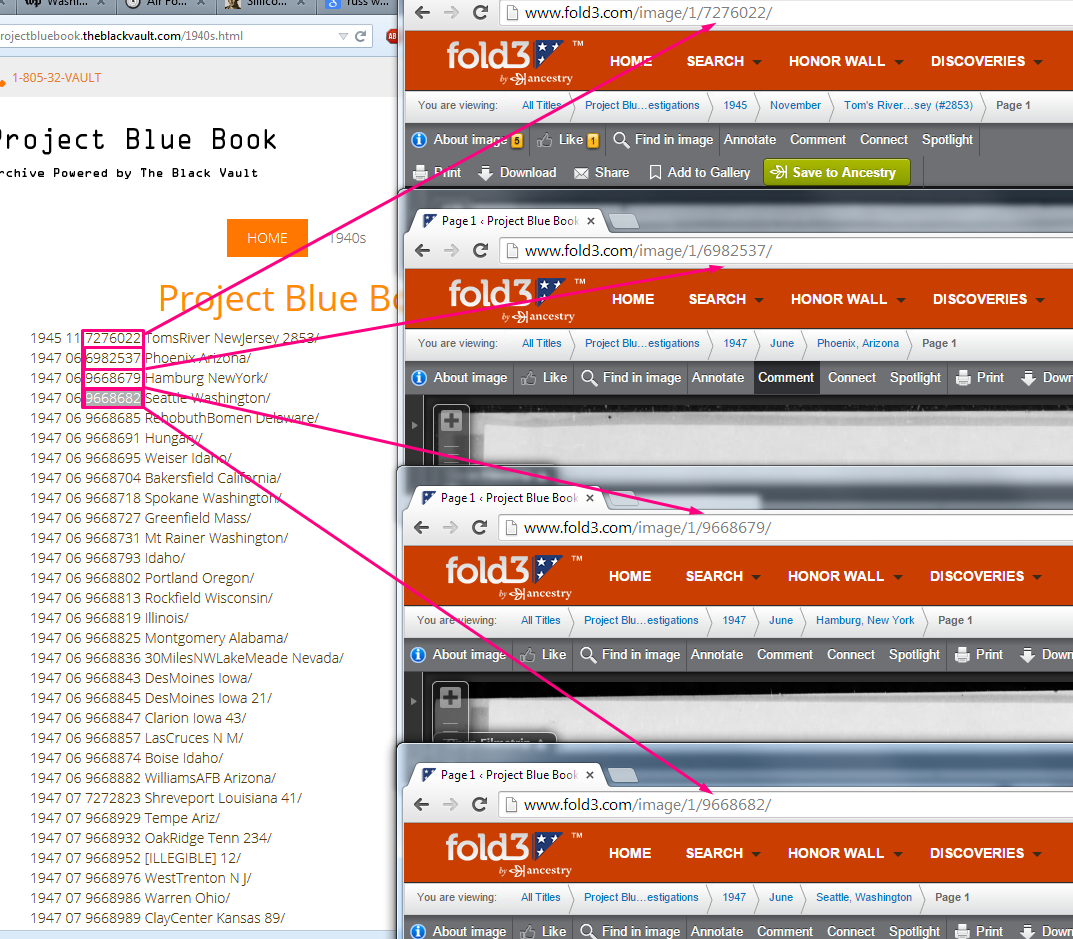 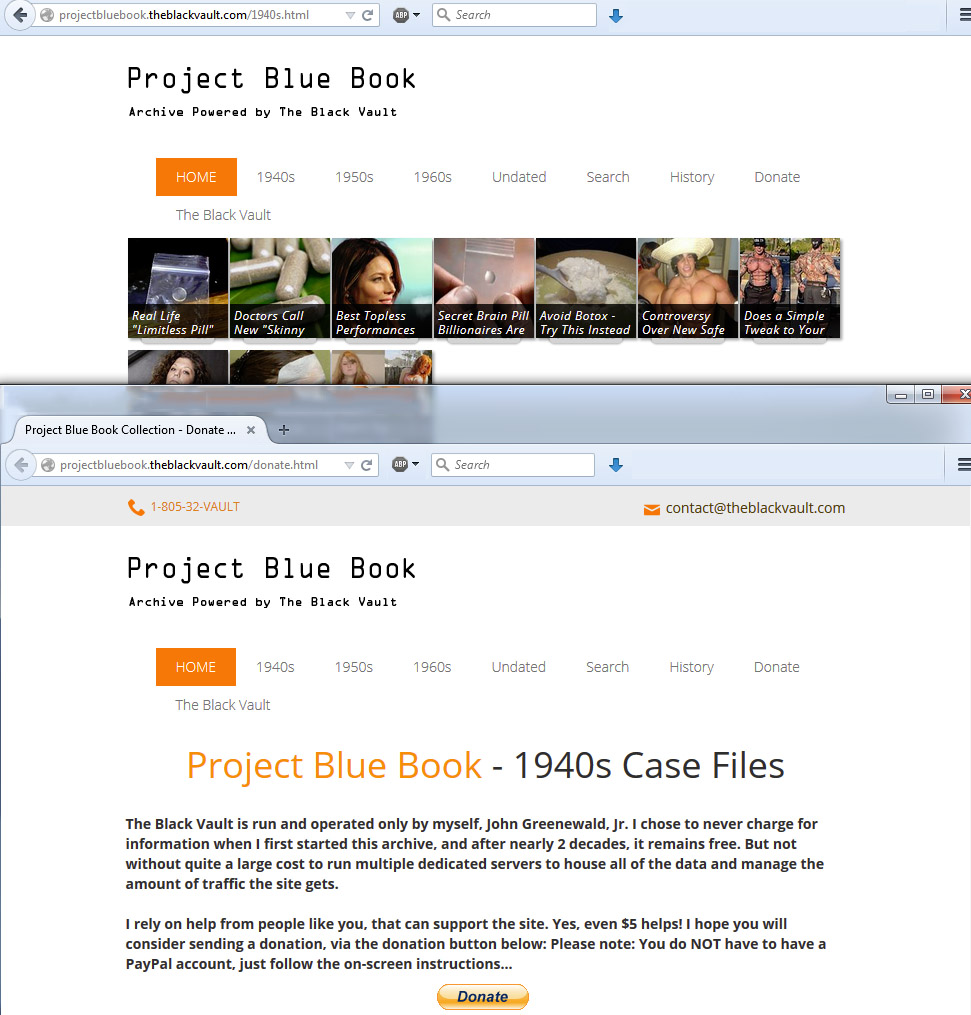 January 29th, 2015 – It is with great frustration to announce, that Ancestry.com, and their subsidiary Fold3, has laid down a claim to copyright on the Project Blue Book material – which has long been labeled as “public domain” by the National Archives & Records Administration (NARA). Ancestry.com is claiming ownership to the digital version of this material – despite me having records that Fold3 doesn’t even have in their archive and I received under the FOIA starting back in 1996. They simply claimed it was 100% theirs and I was forced to remove it.

Because of my attempt with properly crediting Fold3 with a DIRECT LINK to their site as partial credit for some of the material, they used that show of proper credit by me to issue a copyright claim under the Digital Copyright Millennium Act (DCMA). Anyone who knows anything about the law can attest; you are “guilty until proven innocent” so this was the beginning of the end. I never hid from Fold3 as a source, and even brought them up in some media interviews I did take part in, which were all cut out. No one cared about that part of the story – this new archive was what they wanted to report on because it was simple, straight forward, easy and free. And people loved it.

Based on an evidence-less claim I was forced to remove the entire site. That’s right, there was ZERO evidence submitted to my web hosting provider of ownership or copyright or license, but rather, they simply placed the accusation which is all it takes.

In good faith, I took the site down in hopes a compromise could be reached. They already had credit given on the front page of the site for some of the material, and that link alone resulted in a 12%+ increase in their entire statistics since they posted records in 2007, and my link multiplied their weekly hits by 10x, yes ten times, in only 5 days (statistics are posted on their page, so I am not guessing on those statistics but rather took notes).

In the end – they offered I become a member of their affiliate program – and offer a link to them in exchange for a portion of sales generated. ie: You have to sign up with them, pay a membership, and they give me a percentage. I quickly declined.

This is public record material, and it should remain so. To lay ‘exclusive’ claim to it in the digital world, when both sites (my site and theirs) offer it for free – is ludicrous and a waste of time and money for everyone.

But at the end of the day, I am proud to have brought attention to information that although has been available for quite some time – the public at large never knew it existed. I will let Google Trends prove my point. Here is the popularity of Project Blue Book, since 2005, and a graph relating to people searching for information on it.

See that spike? Yes, The Black Vault did that… and I am proud to be the one who caused such an uproar of interest by the public and the media (despite some erroneous facts in the reporting).

Did some media outlets misreport? Yes, and if this page was still up, there was a message on the front page setting the record straight.

But, call it corporate greed, a legal loophole, or a grey area in the copyright law, all of that is gone in the name of getting your personal information, and your credit card, by a corporation that has a wallet much thicker than mine. I’ll let you decide what the right label is to put on this entire mess.

In 18+ years, I’ve never seen anything like this, and it is a sad day for the world of public domain, public information, public record and the idea of “Freedom of Information”.

I have vowed from day 1, never to fall into the pit of desire of placing a price tag on PUBLIC information. It’s a shame I am very much alone in that belief.

edit on 30-1-2015 by hitandrun because: adding some pictures

posted on Jan, 30 2015 @ 02:03 AM
link
If anyone owns the Bluebook info in its entirety its the American People who paid for it and supported it with their inputs.....
Nobody should be able to copyright this material.....period!
edit on 30-1-2015 by stirling because: (no reason given)

How can digital versions of public domain material possibly be subject to copyright in the first place?

originally posted by: stirling
If anyone owns the Bluebook info in its entirety its the American People who paid for it and supported it with their inputs.....
Nobody should be able to copyright this material.....period!

You'll get no argument from me, but it's a little shady when the guy was making money off of Fold3's work digitizing all 130,000 pages, not acknowledging where the material came from in the first place - check his Coast to Coast interview, and pretending like he wasn't making any money off of it.

From what you posted it looks like he received a DMCA notice and chose not to respond to it (rather he pulled the content as required and contacted the claimant directly).

I don't know in this case but something can be in the Public Domain and if I edit it then my version is no longer Public Domain as I have made an artistic change. Perhaps this is the logic that they are using to claim copyright.

Oh well, at least the files are available elsewhere...


originally posted by: stirling
If anyone owns the Bluebook info in its entirety its the American People who paid for it and supported it with their inputs.....
Nobody should be able to copyright this material.....period!

You'll get no argument from me, but it's a little shady when the guy was making money off of Fold3's work digitizing all 130,000 pages and pretending like he wasn't making any money off of it.

Being aware of the work that Greenewald does, I don't believe money is his motivation, regardless of what's been said from where.

originally posted by: Elton
Sued? Are you sure?

I am just using the standard definition. A DCMA takedown notice is to "institute a process in law against."

No government documents can be copyrighted BY THE GOVERNMENT.

But there is a problem in that. If its a FOIA and the person that went to the process of getting the data owns his copy under the FOIA request. unless the government publicly puts out the information.

Ancestry inc owns THERE copy of the government documents because they did the WORK to get there copy.

Government documents on non government web sites are copyrightable to a point.

You can cut and paste the government document from there web site but you can not take any non government data.

In doing this you have to be very careful as the FOIA owner may have put "tells" into there copy of the document.

The safest trick is to cut and paste a line if document into a search engine and find the sites that contain the information.

If you find a government site with the information you are home free as its a public document.

Use of someone else's compilation of facts is a violation. Not the free facts...but their organization by another party...then that used.

originally posted by: Zcustosmorum
How can digital versions of public domain material possibly be subject to copyright in the first place?


That's exactly HOW they can be subject to copyright.

Creating a digital scan of a public domain document is considered creating a derivative work. Derivative works are subject to copyright protection if it significantly alters the original, and provides new value. Taking an offline hard-copy document and making it available online satisfies that requirement. And presumably, those doing the scanning invested some degree of time and expense in doing so, and deserve the copyright protection for their efforts.

If Greenewald's documents are scrapped from other online sources who performed the hard work of going from hard copy to digital, then shame on him.

Please don't ask me to explain further, as I'm sure they'll just tighten my straitjacket again.

A uniquely reliable source has told me this would have been avoided if JG hadn't took off on his own. There were clear plans to work in partnership with Fold3, and others, that would have yielded searchable PDFs and more in the future.

Hopefully some of those plans can still be realised by others who were involved from the start.

JG may well have found greater long-term success and perpetuity of the docs as part of a team instead of a one-man band.

posted on Jan, 30 2015 @ 11:32 AM
link
I would've thought that someone in Greenewalds line of work would know copyright laws and therefore I don't think it was a deliberate action, time will tell I guess

therefore I don't think it was a deliberate action, time will tell I guess

If only that was the case...

originally posted by: Kandinsky
a reply to: Zcustosmorum

therefore I don't think it was a deliberate action, time will tell I guess

If only that was the case...

Either way, what would be the point of deliberately infringing copyright? Surely he'd know he would be sued

originally posted by: Elton
I don't know in this case but something can be in the Public Domain and if I edit it then my version is no longer Public Domain as I have made an artistic change. Perhaps this is the logic that they are using to claim copyright.


That's true, that's why I got a complaint from some company when I posted on YouTube a video with the tether from the famous tether incident breaking, as they said that it was taken from a DVD from them. I sent them the link for the page from where I got the video and things returned to normal.