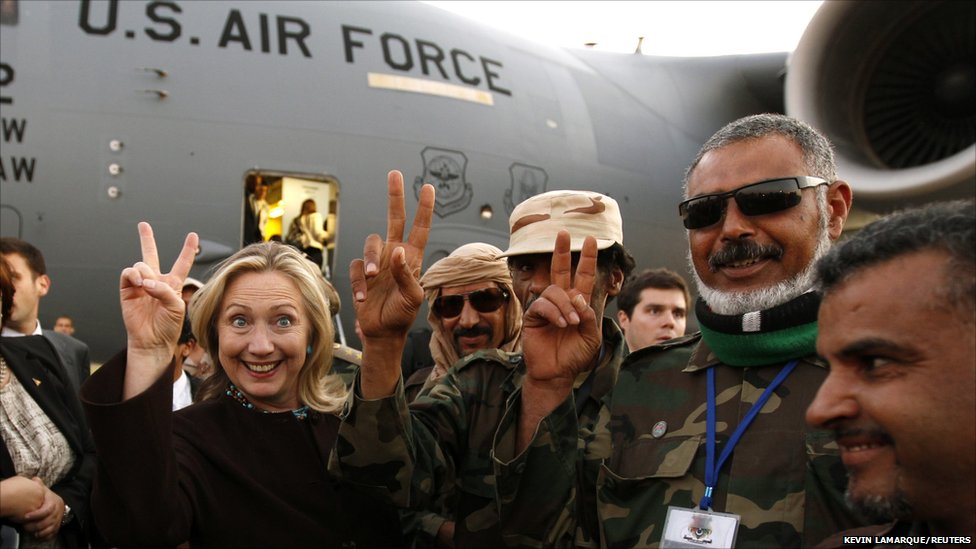 Top Pentagon officials and a senior Democrat in Congress so distrusted Secretary of State Hillary Rodham Clinton’s 2011 march to war in Libya that they opened their own diplomatic channels with the Gadhafi regime in an effort to halt the escalating crisis, according to secret audio recordings recovered from Tripoli.

The tapes, reviewed by The Washington Times and authenticated by the participants, chronicle U.S. officials’ unfiltered conversations with Col. Moammar Gadhafi’s son and a top Libyan leader, including criticisms that Mrs. Clinton had developed tunnel vision and led the U.S. into an unnecessary war without adequately weighing the intelligence community’s concerns.

“You should see these internal State Department reports that are produced in the State Department that go out to the Congress. They’re just full of stupid, stupid facts,” an American intermediary specifically dispatched by the Joint Chiefs of Staff told the Gadhafi regime in July 2011, saying the State Department was controlling what intelligence would be reported to U.S. officials.

At the time, the Gadhafi regime was fighting a civil war that grew out of the Arab Spring, battling Islamist-backed rebels who wanted to dethrone the longtime dictator. Mrs. Clinton argued that Gadhafi might engage in genocide and create a humanitarian crisis and ultimately persuaded President Obama, NATO allies and the United Nations to authorize military intervention.

Gadhafi’s son and heir apparent, Seif Gadhafi, told American officials in the secret conversations that he was worried Mrs. Clinton was using false pretenses to justify unseating his father and insisted that the regime had no intention of harming a mass of civilians. He compared Mrs. Clinton’s campaign for war to that of the George W. Bush administration’s now debunked weapons of mass destruction accusations, which were used to lobby Congress to invade Iraq, the tapes show.

“It was like the WMDs in Iraq. It was based on a false report,” Gadhafi said in a May 2011 phone call to Rep. Dennis J. Kucinich, an Ohio Democrat serving at the time. “Libyan airplanes bombing demonstrators, Libyan airplanes bombing districts in Tripoli, Libyan army killed thousands, etc., etc., and now the whole world found there is no single evidence that such things happened in Libya.”

Seif Gadhafi also warned that many of the U.S.-supported armed rebels were “not freedom fighters” but rather jihadists whom he described as “gangsters and terrorists.”

“And now you have NATO supporting them with ships, with airplanes, helicopters, arms, training, communication,” he said in one recorded conversation with U.S. officials. “We ask the American government send a fact-finding mission to Libya. I want you to see everything with your own eyes.”

The surreptitiously taped conversations reveal an extraordinary departure from traditional policy, in which the U.S. government speaks to foreign governments with one voice coordinated by the State Department.

Instead, the tapes show that the Pentagon’s senior uniformed leadership and a congressman from Mrs. Clinton’s own party conveyed sentiments to the Libyan regime that undercut or conflicted with the secretary of state’s own message at the time.

“If this story is true, it would be highly unusual for the Pentagon to conduct a separate set of diplomatic negotiations, given the way we operated when I was secretary of state,” James A. Baker III, who served under President George H.W. Bush, told The Times. “In our administration, the president made sure that we all sang from the same hymnal.”

Mr. Kucinich, who challenged Mrs. Clinton and Barack Obama for the 2008 Democratic presidential nomination, acknowledged that he undertook his own conversations with the Gadhafi regime. He said he feared Mrs. Clinton was using emotion to sell a war against Libya that wasn’t warranted, and he wanted to get all the information he could to share with his congressional colleagues.

“I had facts that indicated America was headed once again into an intervention that was going to be disastrous,” Mr. Kucinich told The Times. “What was being said at the State Department — if you look at the charge at the time — it wasn’t so much about what happened as it was about what would happen. So there was a distortion of events that were occurring in Libya to justify an intervention which was essentially wrong and illegal.”

Mr. Kucinich wrote a letter to Mr. Obama and Mrs. Clinton in August explaining his communications in a last-ditch effort to stop the war.

Political spin begun ? Someone trying to bury Hilary now, so there is room for Palin ?

As far as I am concerned, she's a vile piece of work that should never have been elected to anything, except maybe cleaning toilets. Supposedly about 6 or 7 years ago, there was a video about her, exposing many of her dirty deeds. I seem to remember watching all of it and the information was pretty serious, you know the usual stuff, murder/assassination, bribery, corruption, etc. I also seem to remember that there were allegations that she had it banned from being shown anywhere that was controlled by mass media outlets, like TV documentaries, news, theatres, etc. It may be up on youtube someplace.

Hillary or the ones she convinced.

But it still may have been based on aligned central banking for one thing.

But Libya is still not aligned with the BIS.

So maybe Hillary really is nuts.

I am in 100% agreement with your assessment of old hilldog!!

Anyone doubting how insane this woman is, I shall reference you to the above photo in the OP, you can simply feel the evil insanity oozing from her being!

Both the Clinton/Bush families are heinous on levels that your average person understandably remains in ignorance of. We are trained to believe our leaders are saviors, when the reality is they are demons. I use that word because it most succinctly captures these puppets and who they represent!

A vile piece of work! My god how accurate!

This is extremely telling as far as i am concerned.

It's ludicrous, isn't it? Gaddafi was, prior to the revolution, lauded by many states for his human rights records. He was also increasingly well regarded by the international community. Somehow, somewhere, all this changed with propaganda bull# stemming from the US administration and NATO. If anything, these reports show that the Gaddafi regime was still trusted enough that US officials had independently taken it upon themselves to approach it for information, clarity and any possible resolution in a time of crisis. That in and of itself is telling.

It's absolutely disgusting what happened to the Gaddafi family and Libya... Look at the country now... 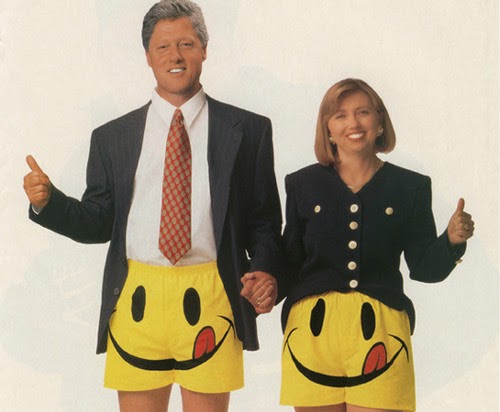 How can anyone stand for this?
I seriously hope there will be a thorough investigation into this... yeah, i'm probably just day-dreaming

I see why the Republicans are pushing this issue... I also see why Democrats are whining about it.

I see who you will vote for, nothing better then a warmonger.

This is what is wrong with our country...

I have no idea if it has been posted before. Though even if it has, it deserves another view.
edit on 1/29/2015 by EternalSolace because: (no reason given)

I wonder how many Libyans would be grateful to the USA (and UK) and also hilary grinning like a loon for their interference in Libya and what it has cost the ordinary Libyan. Gadaffi would have died eventually or been assassinated and things would have moved on naturally.

I still think it was the USA protecting their petro$ which, when you look at the cost in blood, is hardly something to be proud of.

Looking at our westminster scandal of the paedophelia, I have to ask is there any government with its heads that should be in office today? I wonder if we knew the truth about how so many of our leaders all behave with the 'power bit' and its immunity between their teeth?

originally posted by: Plugin
a reply to: Xcathdra

I see who you will vote for, nothing better then a warmonger.

Take the asshattery somewhere else. You have absolutely no idea what you are talking about.
edit on 29-1-2015 by Xcathdra because: (no reason given)

posted on Jan, 29 2015 @ 05:14 AM
link
While I don't think Clinton would make a good President, anything up to and including a salted pretzel would be better than every republican candidate.

No one here is willing to put their life on the line for real change, but seem willing to be the big strong hero in on-line forums - its pathetic really. Even those ''rag heads'' - as you call them - in the middle east had enough courage to stand up and make change.

Truth is, the President doesn't make any decisions. He/She is as useless as that America pin on their lapel. But keep arguing about petty nonsense if it makes you feel important. Truth of the matter is, Americans are obsessed with their guns, fast food, pharmaceuticals and materialistic nonsense. You watch TV instead of making a difference in the world. Ergo, you get the leaders you deserve.

Which is a shame, because your forefathers put their lives on the line during the war of independence, civil war, ww1, ww2 to make sure your country remains great. All it took for you to be distracted and lose your country was TV and fastfood!

While I agree with every word you wrote...I think the same can be said for most of the western world now. Any young people I come in contact with these days are totally oblivious of anything that is going on in the world apart from the trash they are force-fed.


Because the general public has not done its homework. I have friends who will vote for her if she runs and, yet, they don't know anything about her.