posted on Jan, 28 2015 @ 06:25 PM
link
Yes its been here in ATS posts and been in the news but the NEWS here is now Lockheed actually has it up on a Website with some video and pictures. THIS will change OUR lives in the near future. It will also enable Vasimr Propulsion and other exotic space exploration technology as well as provide near free energy to the world.

It’s no secret that our Skunk Works® team often finds itself on the cutting edge of technology. As they work to develop a source of infinite energy, our engineers are looking to the biggest natural fusion reactor for inspiration – the sun. By containing the power of the sun in a small magnetic bottle, we are on the fast track to developing nuclear fusion reactors to serve the world’s ever-growing energy needs.

Russia and the Oil nations better tighten their budgets. Cause its real and soon.

I wonder if China has the blue prints as yet.

Russia may even have them.

Now watch someone try and patent the whole thing and keep it out of our reach. It is likely to stay in the 'Military only' bag of goodies.

The excuse will likely be, 'but it is dangerous, you might cut yourself!'

Good news though, but still old...

Now watch someone try and patent the whole thing and keep it out of our reach. It is likely to stay in the 'Military only' bag of goodies.


Naval Weapons was/is doing that very thing with Bussard's design. Targeted for submarine power. As this will be, I'd imagine. Especially if they get it running p-B11 like they were talking (probably smack).

Now, you get this design running p-B11, and it's even MORE juicy than just reactors for everyone, because then there's not even low-level radioactive waste, and it can produce electricity directly with no turbines. Plus the fuel's dirt cheap and plentiful, unlike running D-T.

This is such good news, they are saying useable within 5 years. The ability to maybe replace fossil fuel burning gas turbines on aircraft is simply amazing.

They said 5 years, 2 years ago. Sooner is better!

posted on Jan, 28 2015 @ 07:06 PM
link
If they said 5 years, that just means they're removing the purposefully malfunctioning parts and replacing them with functioning parts. They've probably had this for 10+ years. It must be frustrating to be a scientist and have to pretend your inventions don't really work by having a part missing or something.

There was a Stargate SG-1 episode where they did that actually now that I remember...

Thanks for sharing this!

posted on Jan, 28 2015 @ 07:20 PM
link
a reply to: Xeven The video says that in ten years we have great military vehicles and in twenty years power for the world. They are touting development of a smaller scale device so that they can prototype and pilot faster and develop faster. They think that they have a system that might work. They say it is high risk, high payoff research.
That means that they have a way to go.

Creating a fusion reaction has never been the problem - they've successfully done this in previous experiments - containing and sustaining it was the issue.

At one time you could buy a D-T fusor off the shelf from Daimler-Chrysler for use as a neutron source. 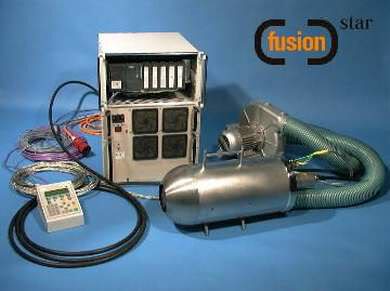 It just operated at a very negative power gain.

posted on Jan, 28 2015 @ 10:00 PM
link
Ahh, how wonderful, no more worries about toxic co2 emissions. Soon the world will bask in the gentle rays of radioactive generators in every home!

originally posted by: GodEmperor
Ahh, how wonderful, no more worries about toxic co2 emissions. Soon the world will bask in the gentle rays of radioactive generators in every home!

Even for D-T, there's not a lot of radioactive waste, and it's pretty short-lived.

If they manage to get to p-B11 with it (rumored but unlikely) then there's no radiation at all.

If you consider a fairly large release of radioactivity into the environment as 'not a lot of waste'.

Then by all means.

Source where there would be "a fairly large release of radioactivity into the environment".

I doubt that will be soon . It's great to see they want cleaner energy sources and every first newborn vehicle that will run on this principle is a blessing for the environment.

But I think that it's also economic propaganda to drop the prices in oil ...

This would cause oil prices to increase not drop. They would want to make all the profit they can while they can.

The source is human nature.

As for the ChinaRussia angle, that was my first thought as well. Only the chances are higher both already have the knowledge but perhaps not the resources. Russia has been talking alot about their new weapons, amd the toys you can build with these batteries are going to be insane.

originally posted by: GodEmperor
a reply to: Bedlam

If you consider a fairly large release of radioactivity into the environment as 'not a lot of waste'.

Then by all means.

Which "fairly large release" would this be?

Creating a fusion reaction has never been the problem - they've successfully done this in previous experiments - containing and sustaining it was the issue.

It really just been a case of waiting for materials research to catch up.


Combine this with upcoming tec like 3d printing and I think our economy will change in a big way.