An ancient human fossil discovered from the seafloor near Taiwan reveals that a primitive group of humans, potentially an unknown species, once lived in Asia, researchers say.
These findings suggest that multiple lineages of extinct humans may have coexisted in Asia before the arrival of modern humans in the region about 40,000 years ago, the scientists added. 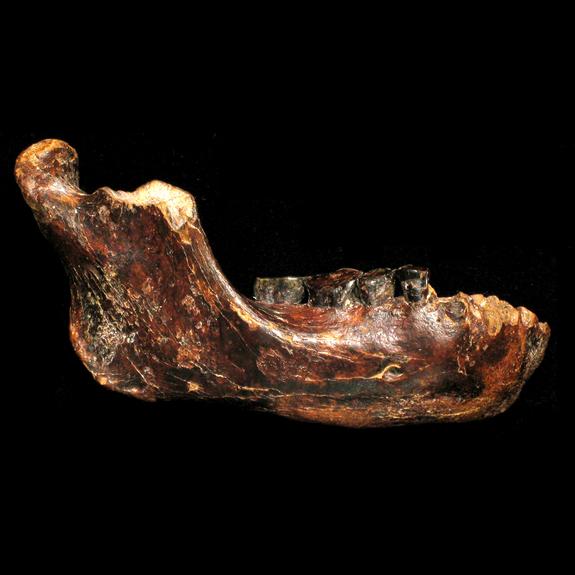 lived between 10,000 and 190,000 years ago. The jaw and its teeth look unexpectedly primitive for this age, the researchers said. During the Pleistocene Epoch, which lasted from about 2.6 million years ago to 11,700 years ago, humans generally evolved smaller jaws and teeth, but the new fossil from Taiwan appears larger and more robust than older Homo erectus fossils from Java and northern China.
The researchers said Penghu 1 does resemble a 400,000-year-old fossil from Hexian, in southern China, located about 590 miles (950 km) north of the Penghu Channel. The scientists suggest these fossils together represent a distinct group of archaic humans, although they caution that they do not yet have enough evidence to say whether it is a new species or not.
"We need other skeletal parts to evaluate the degree of its uniqueness,"study co-author Yousuke Kaifu, a paleoanthropologist at Japan's National Museum of Nature and Science in Tokyo, told Live Science. "The question of species can be effectively discussed after those steps."
The new findings suggest there were several different groups of archaic humans living in Asia at the same time, some more primitive than others. "Then modern humans dispersed into this region around 50,000 to 40,000 years ago and came across a diverse group of hominins," Kaifu said. "This is a very different, complex and exciting story compared to what I was taught in school."
The scientists detailed their findings online today (Jan. 27) in the journal Nature Communications.

news.yahoo.com...
Is this the "unidentified" archaic that has been alluded to in several recent genetic studies.
I also find the location very interesting, as the area around taiwan has been pivotal in the late pliestocene development of modern humans.

Interesting. It initially has me wondering about travel and migration patterns and I am curious to know if there is a map that would show the land and sea elevations during that period?

posted on Jan, 27 2015 @ 01:02 PM
link
Great post, went back to the original source (livescience) great read, I have no doubt there are a multitude of unknown pockets of primitive species of man like this, some may have contributed genes to HSS while most faded into history. Really makes you think about that period of life on Earth, when HSS wasn't the only intelligent hominid around.

I'm certain there are, I'd like to see it too.

Makes me wonder what else is under the ocean waiting to be discovered. If I was very rich I'd fund underwater archaeological expeditions. Even if they didn't find anything it would be an interesting experience. And I agree with Blackmarketeer, I think the same thing. I guess we have to keep digging and hopefully we'll find some of them. S + F

Hopefully that helps (click the thumbnail). Sea levels were right at about 400ft lower than they are now. This jaw bone was found off the western coast at a depth between 200-400ft, so it's quite apparent that it was above ground at some point relatively recently.
edit on 27-1-2015 by SlapMonkey because: (no reason given)

Ah you beat me to it!

Just goes to show how much of human history is likely lying on the seafloor, submerged after the end of the last ice age.

It will be interesting if DNA can show any patterns, links to Denisovan /Neanderthal etc. Perhaps it will also yield more information about human evolution and migration.

There are likely far more yet to be found under oceans and glaciers.

Thank you! Am I correct in seeing Taiwan as part of the mainland?

Yes...when you look at Taiwan in Google Maps and look at the ocean topography around it, you note that the ocean floor is relatively shallow to the north and west of Taiwan, but has a drop off on the east and south. So, it would have still been on the edge of the shoreline, but would have been connected with the mainland.

posted on Jan, 27 2015 @ 03:47 PM
link
Hopefully there is some DNA available in one of the teeth, as that would really shed some light on who these people were and how they relate to modern humans.

The wide range of dates is somewhat puzzling, with that large of a margin of error I wonder what method they used.
I'd like to add that large and primative looking teeth do not necessarily make an archaic.
Large robust teeth indicate a diet of tough foods, such as fiberous plants and the like.
A group of 10k year old native American burials from central California, the "Tranquility burials", have the largest teeth recorded in a modern human population. The teeth were so rubust that the famed anthropologist, J.Lawrence Angle, thought they might have been a descendant of Homo E.
Another interesting facet of the Tranquility burials is that the skulls show a trend towards proto mongolism, they are more mongoloid than any contemporary examples in Asia.

posted on Jan, 27 2015 @ 04:10 PM
link
I came to this thread fully expecting there to be a heated argument about evolution on the first page.

I was pleasantly surprised.

Think about that now....

....hominins in N America that look enough like Homo E that they could be mistaken based on a quick assessment.

How many generations would it take to develop those traits via natural selection?

That sounds more like some mariners ended up in a colony in California, and they had some highly distinct characteristics even for Asia at that time.

Now i am going to have to look that up.

The Tranquility burials were on the banks of a dead end slough off of the san joaquin river, near the town of tranquility.
It is still partially a wet land, and back in the day would not have been a bad place to end up, other than the killer heat of summer and terribly depressing foggy winters. The sloughs are full of wildlife and waterfowl, plenty of fish and crustations and fresh water shell fish. The people there including the modern yokuts indians also pounded the tule reeds into a paste from which they made a bread and porridge. Its here also that the earliest evidence for ginding stones is found.
The tranquility site is also just about 20 miles from my favorite excluded early man site, the 60k+ year old shell midden on the west shore of tulare lake, the Witt site.

p.s. Ive got a PDF of J.Lawrence Angle's 1968 monograph of the tranquility burials, pm me if you want a copy, i also have a site report for the witt site, from a paleo icthyologist.

posted on Jan, 27 2015 @ 07:22 PM
link
The more unrelated humanoid species the scientists dig up the more the theory that bi-pedal intelligence is (near) universal will solidify. Of course there always seems some exceptions to everything, unconventionalities.