posted on Jan, 26 2015 @ 10:16 AM
link
The Kurdish forces in Syria have successfully liberated Kobani after withholding a months-long siege on the city by ISIS terrorists. The Kurds had successfully pushed out ISIS, which has since posted a video (allegedly outside of Kobani) threatening retaliation. Reports suggest that the situation inside the city is now mostly calm, although there is still an exchange of mortar fire between the Kurds and ISIS.

This is a great achievement considering the circumstances and developments in the wider region over the last couple of months. In liberating Kobani, the Syrian Kurds were aided by coalition airstrikes and Iraqi Peshmerga forces. 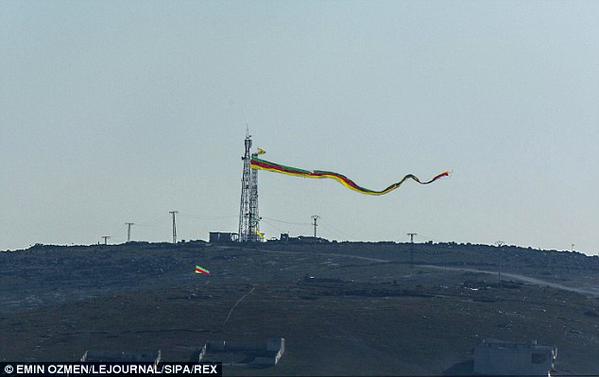 
I don't think ISIS has won a battle in about 6-8 months.


The people are prepared for them now, long may this continue.
edit on 26-1-2015 by CharlieSpeirs because: (no reason given)

posted on Jan, 26 2015 @ 10:38 AM
link
Man, maybe this will force some people to admit that maybe ISIS isn't all that they been cracked up to be. Nah, I'm sure they'll just wait for the media cycle to change and move onto the next thing to scream about hysterically.

As far as i know, ISIS has been losing a lot of ground in Iraq, but has also been gaining some territory in Syria in the same amount of time. Nevertheless, this is a great victory for the Kurds, and i hope things get better here on out. They still need to liberate the numerous villages in the region.

originally posted by: CharlieSpeirs
I don't think ISIS has won a battle in about 6-8 months.
.

Off the media radar, but they have been kicking arse in Anbar province all that time and expanding in almost all other area's. They only put "coalition" victories or IS crimes on the news, hardly ever ISIS victories and if they do, you really have to dig for them. Kobane became a symbol to rally the world against them, but IS are not reeling from the defeat at this minor border town.

originally posted by: Krazysh0t
Man, maybe this will force some people to admit that maybe ISIS isn't all that they been cracked up to be. Nah, I'm sure they'll just wait for the media cycle to change and move onto the next thing to scream about hysterically.

I think that many people have already mostly moved on. ISIS is really only ever mentioned when domestic police raids uncover a terrorist plot or ISIS itself makes a significant move. Often times we will also get the occasional report of them being defeated, as is the case with Kobani.

It would appear that many people have since moved on with the media cycle into more pointless things.

Yeah I should have elaborated I meant Iraq rather than Syria which is pretty much a free for all at the moment...


& you're right about the Kurds advantage of home turf.


Add that to their persistence, will & history of dealing with persecution I only had one outcome in mind for Kobani.

The coalition has been a gift as well because something needed to be said about the unity to actually want to confront this scourge.
Arab States, the Western World of Europe & Australia need to continue the collaboration & be more connected in dealing with this, rather than laying it at the feet of the Locals & US Armed Forces...


Here's to hoping that the liberation continues elsewhere across the region.

Yea, the rhetoric has died down a bit over this last week or so. So maybe you are right. I knew it was only a matter of time.

It's much more than simply knowing the terrain; the Kurds fought like hell to avoid genocide at the hands of these ISIS lunatics.
edit on 26-1-2015 by IAMTAT because: (no reason given)

I'm not denying they have spread far and wide but I was speaking more about specific victories to take territory...
They took parts of Anbar but that was quite a while ago & the fighting continues.


I was mainly refering to their endeavours of the last 6-8 months where it's been mostly retreat, defeat or continued attempts to push them back out.


Like I said, the ambush tactics they used to take territory early last year has become a useless strategy for the most part because people are awaiting their arrival now...
Prior to that they used their less than publicised group to invade areas and I'd be surprised if that works anywhere now...
They will have to strategise differently to win a battle now...
& personally I don't think they have the wherewithal to do that.


We'll have to wait and see I guess.


ISIS as the underdog?
Thanks for the thread, but please don't downplay the Kurds' heroic victory over a vastly better armed, fanatical Islamic terrorist force bent upon their complete extermination.

It's much more than simply knowing the terrain; the Kurds fought like hell to avoid genocide at the hands of these ISIS lunatics.

I am not attempting to downplay the Kurdish victory of Kobani. It is something i have been following for months now, and i am delighted with the result.

You are correct in that ISIS was better armed and hell bent on destroying the Kurds, but the Kurds did have some advantages, with knowledge of the terrain being one example i cited. Indeed, while ISIS has a larger army and better equipment than the Kurds, i still considered them the underdog in the battle - simply due to the reasons stated by Charlie, you and myself. I think the results speak for themselves too. The last statistics i saw put the ISIS death toll at over 1000, with under 500 Kurds losing their lives.

It is a great victory, and one that is well deserved. While there were some uncertain moments, i always thought that the Kurds would maintain control of the city. This news shows that. I hope the Kurds are now able to push further into the villages and liberate the entire region which was once under their control.
edit on 26-1-2015 by daaskapital because: (no reason given)

originally posted by: CharlieSpeirs
I was mainly refering to their endeavours of the last 6-8 months where it's been mostly retreat, defeat or continued attempts to push them back out.

Yeah, that's what I am talking about - as the fight for Kobane was front page news, the Iraqi Army was being pushed back towards Baghdad once again. There was an Airbase that was pretty much surrounded, I forget the name and buggered if I can find the reports now. I'll grant you, the past 6 weeks or so we've seen the Iraqi Army make gains, but it is tidbits and not much to write home about - Baghdad is still very much under threat.

Not something I can post on ATS since it is pretty gritty.

But certainly cheer worthy if you're used to seeing combat and combat footage.

I fight to live, they fight to die.

The biggest mistake the world could make would be to try to take away what the Kurds are earning with their blood right now.

originally posted by: ketsuko
The Kurds also have a prospective homeland on the table. A man will fight very hard for what he calls home.

The biggest mistake the world could make would be to try to take away what the Kurds are earning with their blood right now.

I think the reason the West is taking such a cold shoulder approach to the Kurds right now is because they have no intention of backing a sovereign Kurdish State. Which is a shame. The Kurds are one of the few groups in the Middle East not out to slaughter everyone, subjugate everyone, or threaten everyone.

They are fighting to the death and they will be screwed over in no time. Its infuriating

posted on Jan, 26 2015 @ 09:26 PM
link
The Kurds are absolutely worthy of their own sovereign state. They deserve to carve their own path. I hope they get it after all this # is over and done with.

But don't be under the illusion that the threat is false or receding.

Recent reports suggest that up to 10 militant groups within Pakistan and Afghanistan, including ex-Taliban fighters, have pledged allegiance to IS and Abu Bakr al-Baghdadi.

We all know that many of IS's origins lie with the Wahhabi's in Saudi Arabia.
Saudi Arabia's future is far from settled - the newly crowned King is 79 years old and the Crown Prince is 69.
After these two the line of succession is far from clear.....just the sort of doubt and intrigue in which extremism flourishes.
IS have promised to destroy Mecca and Medina and they have increasing support in the poor Saudi communities who resent the opulence of the ruling family and their supporters.

If IS were to gain a threshold within Saudi how would Iran react?
It would certainly feel even more threatened that it already does.

Perhaps even more critically how would the US / 'West' react if it thought the supply from Saudi's oil fields were threatened?

Added to all that Saudi's closest neighbour is Yemen, a country in which rebel extremists have forced the resignation of the President and a country that provides a foothold for Iranian backed Qaeda.

Nearly every country in region is experiencing problems - Jordan is inundated with refugees from all over the region. In Bahrain the Shia majority are turning against the rule of a Sunni minority.

All of these situations provide the sort of environment for the fanatics to flourish, and IS are the group that makes most appeal to a growing number of disgruntled Sunni Muslims who hold the ruling Sunni regimes in nothing but contempt and disgust and have a bitter hatred for all things Shia.

We have not seen the last of IS yet.....not by any stretch of the imagination.

Wouldn't surprise me in the slightest if the world hangs them out to dry. After all, why would we bother recognize a state for an actual decent group of Muslims who are proving they have deserved their own real estate all along. And like everything else we do over there, it will bite us in the ass when we fail to hold up their claim.

Does anyone still think any of the world's nations actually want to create peace and stability in the ME?