Cops aren’t the Only Ones who can Assault Innocent People with Impunity, Their Dogs Can Too

posted on Jan, 25 2015 @ 06:34 AM
link
The standard excuse. Stupid, negligent, or downright criminal, they don't want to obey the laws they've sworn to enforce. And speaking of negligence, why was a presumably highly-trained "K9 officer" dog prone to mauling children? 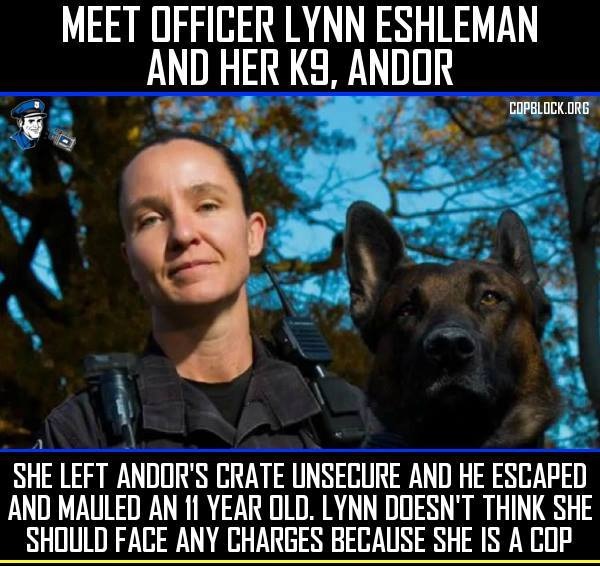 A DeKalb County police officer is claiming “official immunity” after she failed to properly restrain her K-9 and it got loose, maiming an 11-year-old boy. The Georgia Supreme Court is now determining whether or not the family of the boy can sue for damages.

On November 6, 2011, Officer Lynn Eshleman’s K9, Andor, bit an 11-year-old neighbor playing in his neighbor’s yard. Officer Eshleman had warned children in the neighborhood not to look over the fence because it antagonized the dog. She also warned them if he ever escaped the fence, they should just stand still. “When you run, you become prey to a dog,” she allegedly told the children. When Andor escaped from the back of the officer’s truck one day, he ran into the yard where the boys were playing. When 11-year-old Chandler Key tried to run away, Andor latched onto his arm and dragged him to the ground.

So I guess this boy will just be "Collateral Damage" on the war on drugs?

She KNOWS the dog attacks people yet she has no chain or cage and lets it roam free. TAKE THE DOG AWAY AND ARREST HER PATHETIC ASS. That's pretty much assault with intent.
edit on 25-1-2015 by Bloodydagger because: (no reason given)

I posted it a while back but the story barely got any coverage outside of a few tiny local papers...

...to most, this kind of "accident" is unfortunate, but it appears most don't care enough to press the issue.
Maybe this time around.....nah, nevermind.

TAKE THE DOG AWAY AND ARREST HER PATHETIC ASS. That's pretty much assault with intent.

(A LOT of this kind of sh*t would stop post-haste if these cops knew these "accidents" would cut into their pocketbooks)
edit on 25-1-2015 by Jakal26 because: adding thoughts.

I am reminded of a story from the WWII prison camp
There was a German guard who had a dog called "Man".
He called the Jews "Dogs". He would say to the dog "Man
get that dog!"

If I am assaulted by a police dog, no matter how out of
control the dog is, he has rights as a police officer. If I kill
the dog to protect myself(if I'm innocent or not) I am likely to be
prosecuted for murder in most USA jurisdictions.

Giving too many rights to animals
degrades humanity. I know a woman(I started to say lady) who says she
treats her dogs just like her children. I think to myself, " what a colossal
insult to her children!"

Cop lady; negligence is negligence. Are there extenuating circumstances?
None were mentioned. BTW, the dog should be euthanized. It's not
a good police officer.

I cant believe she said if he ever gets loose stand still. That dog was NOT trained properly.

Our 'controllers' will probably let her off of any responsibility.

posted on Jan, 25 2015 @ 06:52 AM
link
In the end, that Dog was a deadly weapon that was trained to maul and kill it sounds like. No properly trained Dog would be prone to just attack a child like that for no reason at all.

The problem is, even if the family did win, the taxpayer foots the gd bill and she (the woman who can't seem to handle a dog) walks away.

....THAT is the reason this kind of stuff happens without any changes. Change that, you stop a LOT of this stuff.

Looks like the dog's trainers and those who set policy for this deptment
are negligent too.
Any possibility of this dog getting loose, is like leaving a gun with the
safety off in a daycare.
edit on 25-1-2015 by UMayBRite! because: moar

posted on Jan, 25 2015 @ 06:55 AM
link
Not to mention, how many Cop stories do we hear about them killing innocent Dogs at some house they are investigating? So they can kill our Dogs, but I bet if someone killed that Woman's deadly Dog, that they'd get the book thrown at them.

I'm sick of these double standards.

originally posted by: Jakal26
a reply to: stosh64

The problem is, even if the family did win, the taxpayer foots the gd bill and she (the woman who can't seem to handle a dog) walks away.

....THAT is the reason this kind of stuff happens without any changes. Change that, you stop a LOT of this stuff.

So true, thanks for cheering up my morning jakal!!

I'm going to watch funny cat vids on YT. Not awake enough for reality yet.

No...you probably wouldn't go to jail if the dog was attacking your child and you shot it.
That is exactly what happened in the case I brought here (the thread I linked in my first comment) and the guy walked.

I am not sure about further details because it was hard to dig up information on the case.
Had it not been for some of the fine folks here at ATS I wouldn't have known anything more than the exerts from the local paper (they never posted the story to their online column)....but, given that a few here had family in the area I got a lot of information...so.

...but no, you probably wouldn't go to jail for it, though I assume that was a bit of hyperbole.

originally posted by: Bloodydagger
In the end, that Dog was a deadly weapon that was trained to maul and kill it sounds like. No properly trained Dog would be prone to just attack a child like that for no reason at all.

If it were my dog?

I would be charged with assault and the dog put down as a dangerous animal.

Anybody else would be held liable for this boys injuries. The police have a responsibility to keep their guns secured, so they should also have the responsibility to make sure their dogs are properly secured. It's cases like these that make the public feel there are two justice systems in this country. If the police don't have to follow the same laws they shouldn't be enforcing them.


It's cases like these that make the public feel there are two justice systems in this country.

It's cases like these that [clearly] allow the public to see that there are two justice systems in this country.


originally posted by: Bloodydagger
In the end, that Dog was a deadly weapon that was trained to maul and kill it sounds like. No properly trained Dog would be prone to just attack a child like that for no reason at all.

If it were my dog?

I would be charged with assault and the dog put down as a dangerous animal.

This- I am in the same boat.
We are a class with less rights than the dogs of the ruling class.

“Because Andor was a police canine, specially trained to apprehend suspects, there was some evidence that ‘the animal had a propensity to do the act which caused the injury and that the defendant knew of it,'” the Court of Appeals opinion says.

She was careless and should be personally liable for any injuries, medical bills and should face charges. That she's fought it this hard, tells you she knows she's guilty and is just using the "official immunity" as a last resort. Stand up you worthless bitch. Apologize to the family and take your punishment with some dignity.


If it were my dog? I would be charged with assault and the dog put down as a dangerous animal.

Not necessarily. It depends on a variety of factors.
I know this because I once had a pitbull that dove through a glass door (shattered it) and pinned a lady that was walking down the road to a fence and bit her arm.
....took me a good 30 or 40 blows to the head with my fist to get him off her.

I was not charged with assault...though, I did have to pay her medical bills (just some cuts and scratches that ended up costing about 2 grand at the ER) and my dog had to go to an obedience school and was placed on "house arrest" [I kid you not] for 3 months.

....later, I put the damned dog down myself.
He became aggressive (semi) with children and I was afraid he was going to maim someone, so....he got buried.

...my point is, it isn't always that clear cut. You won't always be charged [but some will]..
...guess my real point is that there is no consistency in the justice system.

Again, the problem is she will not be the one footing the bills (though, regardless...those bills should be paid) the taxpayer will.
So, in the end, it's like a little slap on the wrist.

If it was HER that was footing the bill, different story.
Make ALL cops liable to foot the bill when this kind of thing (and other abuses and "accidents"...yata yata) happens and we WILL see changes in their actions. I guarantee it.

The ONLY way to make a man [or woman] understand sometimes....either hit them [physical force teaches lessons] or hit their pocketbook [teaches an even better lesson]...

posted on Jan, 25 2015 @ 09:03 AM
link
Those dogs are freaking scary. But they can be thrown off if you have something that smells so strongly it burns their sensitive noses. Like chemicals used for photo development and things like that.

That lady officer should be charged. Just because she's a cop doesn't mean she's above the law. In fact, their ethical code states that she must adhere to the law and be a model citizen. That's what being a police officer means in theory. I say it's time she revisited that ethics code she swore to uphold.

posted on Jan, 25 2015 @ 09:11 AM
link
I have a close family friend who is a K-9 officer in our local Sheriff's department. His dog recently bit a woman while out getting his vehicle serviced. He did everything right. The dog was a very good dog and part of his family. The dog was put down almost immediately at the decision of the Sheriff. While I did not agree with his decision I respect it. While my family friend is still grieving his lost family member, he respects the decision also. This does not change the fact that a good dog lost his life as the result of circumstances out of his control. His instinct and training kicked in. He reacted. The woman involved understood she had a part in the incident and did not want the dog put down. But my local Sheriff is a man of character and understood the overwhelming message that would be sent if immediate and just action was not taken. I am very proud of my local Sheriff's department and always have been. They are men and women of dignity and respect who remember that they are servants and protectors of my community. Some cops still get it. Because of this I still have hope that our American values and way of life will still prevail.